Now that SPECTRE is out on home video, I feel it is time to discuss the movie in more detail, as I promised I would when I wrote a post on it during its theatrical release. (WARNING: Yes, there are spoilers ahead.)

I have every single official James Bond film on home video, so of course I bought SPECTRE. Seeing it again didn't make me change my mind about it--if anything it reiterated many of my original thoughts.

The opening sequence of the film (which lasts about fifteen minutes) is spectacular....maybe too spectacular, because it overwhelms almost everything that happens in the rest of the story. And I have to say I was disappointed in how the sequence ended--Bond should have flown the helicopter right outside the hotel room where he left the girl, and he should have said something like, "Need a lift?" (That's what Roger Moore would have done.)

The car chase in Rome between Bond and Dave Bautista's character doesn't match up to other Bond movie chase scenes--there's a perfunctory tone to it. (And what about taking a brand spanking new Aston Martin sports car and dumping it in a river?) It's reminiscent of a car commercial--as a matter of fact, the whole movie kind of looks like a car commercial. Is it fair to say that SPECTRE was over-produced? Is there such a thing as a movie looking over-produced? I guess what I'm trying to say is that I feel there should have been less concern on making the movie look fabulous and more concern on putting some verve and vitality to the plot.

SPECTRE is the longest official Bond film to date, clocking in at almost two and a half hours. I give director Sam Mendes credit for laying off the now par-for-the-course hand-held camera shots and ADD-style editing, but I think here the pacing was too lugubrious. The movie has too much style in it and not enough fun.

The revelation that Christoph Waltz's character was actually Blofeld wasn't much of a secret--it would have been more of a shock if Waltz hadn't been Blofeld. Waltz is given all the typical Blofeld accouterments--he wears an off-shoot of the Nehru jacket, he has a white cat, and he gets to preside at a meeting of Spectre big-wigs where someone gets killed. (This Blofeld is not bald, but I think the reason for that is the Broccolis didn't want younger viewers to be reminded of Michael Myers' Dr. Evil.) Later in the story Waltz's Blofeld winds up with a scar that is very much like the one that Donald Pleasence's Blofeld had in YOU ONLY LIVE TWICE. But Waltz, at least to me, doesn't make the major impression that I thought he would. And I believe the reason for that is the film's biggest revelation--according to this story Bond was the equivalent of Blofeld's foster brother.

The idea that Bond and Blofeld had a personal history does not come from the Ian Fleming novels (which I have all read, by the way). In Fleming's work Bond's only personal connection to Blofeld is the fact that the villain is responsible for the death of the agent's wife. Fleming's Blofeld sees Bond as an annoyance.

Now, in the 21st Century series of Bond movies, Blofeld is part of Bond's origin story. I assume that the main reason this was done was to make Bond's battle with Blofeld to be "personal"--that this raises the stakes, so to speak. 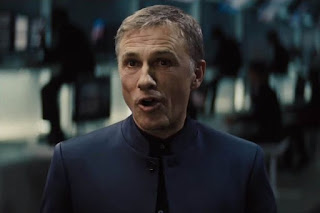 But in my opinion, this lessens Blofeld as a villain. In the Bond films of the past, Blofeld was a mysterious larger-than-life figure, and the head of the world's greatest criminal organization. In SPECTRE he's just a goofy guy with serious Daddy issues (Waltz's Blofeld hates Bond because the young 007 was close to Blofeld's father). A lot of modern movies--including a number of superhero features--have gone out of there way to make it so the main hero and villain have a personal connection. I don't think this makes things more dramatic--what it does is that it sends a message that having a hero fight evil because he feels he has to (or, in the case of Bond, because it's his job as a government agent) is not enough. A good guy can't just choose to be a good guy anymore--he has to have a special motivation, and it has to be wrapped up in an origin story.


Anyway....the "new" Blofeld also has a classic super-duper secret hideout....and Bond's escape from it is way too easy. (Apparently the Spectre minions working at the place have learned marksmanship skills from the Imperial Stormtroopers of the Galactic Empire.) Here's what should have happened--as Bond was being tortured by Blofeld, Ralph Fiennes' M should have showed up, with a group of SAS soldiers, and we would have been treated to an old fashioned climatic grand battle, in the same manner as the endings of YOU ONLY LIVE TWICE and THE SPY WHO LOVED ME. Instead Bond gets out of the place in about a couple of minutes, and then (in the real climax) he shoots down Blofeld's helicopter with...a pistol?

I'm assuming that Spectre and Blofeld will figure in any future Bond adventures. Is it too much to ask that Blofeld be totally rebooted in the next Bond film? (This idea isn't as crazy as it sounds. In the three classic official Bond films where Blofeld was a major character, the role was played by three very different actors who had very different personalities.) The present-day Bond series really, really needs to move away from the CASINO ROYALE storyline and cut Daniel Craig loose from it. I mean, SPECTRE is the fourth Craig Bond film, and they're still under the shadow of CASINO ROYALE. Recently I read on the internet a quote that said the Craig Bond films form the longest origin story in movie history, and there's a lot of truth to that. Instead of continuously learning about Bond in these movies, it's time to let Bond just be Bond.