THE VAMPIRE AND THE BALLERINA 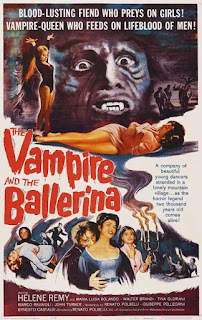 EURO GOTHIC deals with a number of movies that I have never seen before--and some I've never even heard of before. The book has inspired me to go on the internet and seek out some of these obscure titles. One picture that piqued my interest was an Italian film made in 1959 called L'AMANTE DEL VAMPIRO--it is was released in America as THE VAMPIRE AND THE BALLERINA. I found the movie on YouTube, and it was the uncut Italian version, with the Italian title and English subtitles. The print that I watched looked fantastic, by the way.

The release of Hammer's HORROR OF DRACULA was a major inspiration for THE VAMPIRE AND THE BALLERINA--in Rigby's book director Renato Polselli is quoted saying he was impressed by it. THE VAMPIRE AND THE BALLERINA was one of the first true Italian Gothic films, and though it certainly isn't up to the later examples of that genre from such filmmakers as Mario Bava and Antonio Margheriti, it's an efficient tale with a few unusual twists on the vampire legend.

Despite its being a Gothic horror, the movie is set in contemporary times. A troupe of ballerinas are practicing in a large house, which is located near a village beset by a number of mysterious deaths. (Sound familiar?) One day, two of the ballerinas, Luisa and Francesca, along with Francesca's boyfriend Luca, seek shelter from a storm in an abandoned castle. They find the castle tenanted by a beautiful but strange Countess and her "servant" Herman. The dour duo of course are vampires, and they set their sights on the lovely ballerinas.

The best thing about THE VAMPIRE AND THE BALLERINA is the atmospheric black & white photography by Angelo Baistrocchi. Director Polselli uses natural outdoor locations instead of Hammer's typical lush production design--two different real-life castles were used during filming. The movie starts out with an effective sequence of a young farm girl being stalked and attacked. Later the vampirized girl "watches" her own burial--her coffin has a handy window built into it--and the camera takes her point of view, in a reference to the classic VAMPYR.

The girl revives at night and leaves her grave...only to be staked by Herman himself. The idea of a head vampire staking one of his own victims is one of the twists in this tale. Another is the Countess and Herman (who actually is the real power of the two) feeding off one another to keep themselves youthful. When Herman is at his most vampiric, he has a makeup job that looks like a very bad Halloween mask. This is by far the movie's biggest letdown--it's hard to take Herman seriously as a viable threat when he looks so goofy.

The climax of the film owes a great deal to the aforementioned HORROR OF DRACULA, with one of the young male heroes making a cross out of candlesticks, and vampires being forced out into the sun to be destroyed. Unfortunately THE VAMPIRE AND THE BALLERINA doesn't have the same acting talent of that classic Hammer film. The Italian performers are adequate, nothing more. The role of the Countess really needed someone like a Barbara Steele, and the actor who plays Herman is more David Manners than Bela Lugosi. It does need mentioning that the ballerinas are quite a collection of beauties, Luisa and Francesca especially. The movie anticipates many, many other vampire films that use the contrivance of having a bunch of gorgeous young females around while the undead are roaming about, such as THE BRIDES OF DRACULA and Hammer's Karnstein trilogy. Since this is a very early entry in the Italian Gothic sweepstakes, there's no nudity (or gore either)....but the ballerinas get two different dance sequences to strut their stuff. The numbers are more like burlesque routines than any ballet, but there's nothing wrong with that from my point of view.

I wouldn't say that THE VAMPIRE AND THE BALLERINA is a underrated classic. It's a decent Gothic vampire film--it's enjoyable if you are interested in this type of fare, and the girls are certainly easy to look at. I've seen plenty of vampire movies that were worse. It is definitely worth checking out if you get a chance to see it.