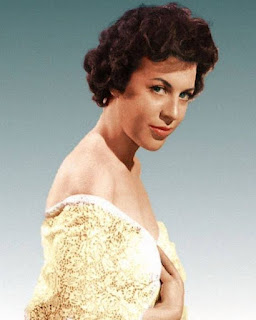 Valerie Gaunt, who passed away a few days ago, may not be known to the average film buff, but she holds a high position among fans of Hammer Films. It could even be said that she provided the template for what would come to be known as "Hammer Glamour".

In THE CURSE OF FRANKENSTEIN, Valerie plays Justine, the maid to Peter Cushing's Baron Frankenstein. Justine isn't merely the hired help--she and the Baron are carrying on an affair. When the Baron's attractive cousin Elizabeth (Hazel Court) shows up, Justine is rightfully jealous--the Baron and Elizabeth have an agreement to be married, and Justine isn't too happy about it. Justine tries to blackmail the Baron--not a good choice, considering that Frankenstein has created a being out of corpses, and he's not about to let anyone get in his way. The Baron locks Justine in the laboratory with his creature (Christopher Lee), and even though we don't get to see her eventual fate, we can easily guess. The next scene contains the famous line "Pass the marmalade"--a darkly humorous counterpoint to Justine's travails.

As Justine, Gaunt uses a cute accent--I still haven't figured out if it is Spanish or French--and she shows some fiery passion after the Baron informs her of his upcoming marriage to Elizabeth. During her trip to the Baron's laboratory, she gets to wear a nightgown (of course) and she gets to let loose an impressive scream--technically she was the very first Hammer Gothic Horror Scream Queen. (She also is featured in the trailer for THE CURSE OF FRANKENSTEIN--her name is even flashed on the screen during it.)

In HORROR OF DRACULA (I'm an American, so that's the title I'm gonna use), Valerie is credited as "Vampire Woman". She appears early on in the film, eerily sneaking up on Jonathan Harker (John Van Eyssen). Once again the actress is nightgown-clad, and if anything she looks even more spectacular than she did in THE CURSE OF FRANKENSTEIN. The Vampire Woman at first desperately pleads to Harker to save her from Count Dracula, but within an instant she tries to put the bite on him. This causes Dracula himself (Christopher Lee) to angrily intervene--and the following is probably the scariest moment in Hammer Films history. Later Harker destroys the Vampire Woman in time-honored fashion--which means that Valerie Gaunt was the recipient of the very first Hammer vampire staking. (By the way, Wayne Kinsey's stupendous book THE HAMMER DRACULA SCRAPBOOK shows a picture of Gaunt's contract for her role in HORROR OF DRACULA--her salary was 100 pounds!)

The impression that Gaunt made in her two movie roles far outweighs the total amount of screen time she actually had. As both Justine and the "Vampire Woman", she showed quite a bit of range in a very short amount of time. Justine goes from sexy maid to angry jilted lover quite quickly, and the Vampire Woman first seems a frightened victim before she turns on Harker with a ferocity that is only topped by her master, the King of Vampires. It makes one wonder what Gaunt could have done with a full-fledged leading role.

After completing her role in HORROR OF DRACULA, Gaunt married Gerald Reddington in 1958 and retired from acting. As far as I know, she never gave interviews about Hammer in her later years, and I don't believe she ever attended any autograph shows. It appears that she didn't seem to regret not continuing her acting career. While looking up photos of Gaunt on the internet in preparation for this blog post, I noticed something about many of her posed "cheesecake" photos. Check out a few of them and see what you think: 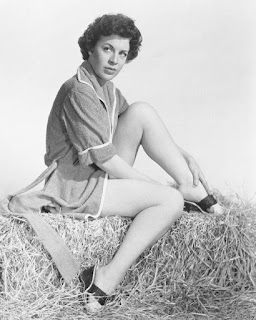 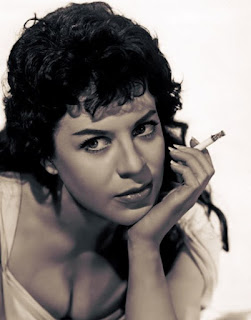 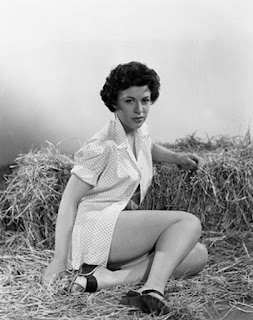 I don't know about you...but when I look at these photos, it's very easy to discern that Valerie Gaunt has very little enthusiasm for what she has to do. I'm sure almost every actress who had to pose for pictures like these felt silly...but Gaunt can't even offer up one fake smile. Maybe she was encouraged to act "pouty", but I personally think it was more than that. The message she seems to be sending in these shots is one that says, "I really could be doing far more important things right now." Maybe Valerie Gaunt didn't want to spend the rest of her screen career wearing nightgowns and posing next to haystacks.

The fact that Valerie Gaunt stayed out of the limelight made her an enticing mystery among Hammer fans. They all wanted to know what she felt about Cushing, Lee, Terence Fisher, Bray Studios, etc. You could say that Valerie Gaunt left a lot of monster movie fans wanting....but what she did contribute to the horror genre was so overwhelming, it's hard to be disappointed that she didn't have a larger acting career.

At her passing Valerie Gaunt was still married to Gerald Reddington, and the couple had four children. One can easily assume that she lived a happy, contented life--and in the end that is far more important than giving interviews or autographs to crazy fanboys like me.
Posted by Dan Day, Jr. at 1:54 PM