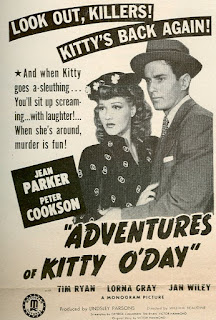 ADVENTURES OF KITTY O'DAY is Monogram's 1945 sequel to DETECTIVE KITTY O'DAY. Jean Parker returns as Kitty, as do Peter Cookson as her boyfriend Johnny and Tim Ryan as Inspector Clancy. (As in the first Kitty film, Ryan is also credited as co-writer.) William Beaudine also returns as director.

In this story Kitty and Johnny work at the swanky Townley Hotel--she as a switchboard operator, he as a travel agent. Kitty's job fits perfectly with her busybody attributes, and while answering a call from the hotel's owner, she overhears the man being shot. Kitty sends Johnny to see what is going on, and he discovers the owner's body. When their old friend Inspector Clancy shows up, the body has disappeared. Of course all sorts of (supposedly) wacky complications ensue, with the body of the murdered man popping up in various spots in the hotel and other suspects turning up dead.

There's a lot more emphasis on comedy in Kitty II than there was in Kitty I. If anything, Kitty is more flighty and emotional than she was in the first film. She also does a lot of screaming here, and Jean Parker's yelps are on a Fay Wray-type level. Parker even gets to engage in some slapstick during a long chase through the hotel's corridors. The mystery (such as it is) takes a back seat to Kitty and Johnny's antics. The duo spend a lot time arguing with one another, and when they're with Inspector Clancy they argue with him, and while these scenes attempt to be funny they get a bit tiring after awhile.

This was the last Kitty O'Day film, and it's doubtful that the series would have improved if it had continued. Monogram was too low budget to give the character any pizzazz--further adventures of Kitty might have worked if she visited exotic locations and had excellent character actors to play off of. It's a tribute to Jean Parker that Kitty O'Day doesn't come off as a total pain in the neck--because when it's all said and done that basically what the character is. The Kitty O'Day movies remind me of the many classic TV sitcoms that would have episodes where the main members of the cast play detective. Jean Parker by far is the best thing about them.
Posted by Dan Day, Jr. at 2:18 PM