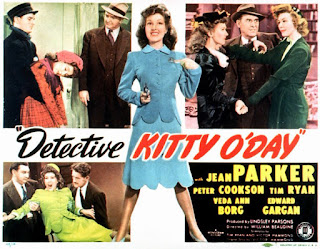 When I started becoming a film buff in the mid-1980s, the VCR home video boom was starting to commence. Video rental stores were popping up on every corner, and VHS tapes were being sold at just about every type of establishment. The big-name mainstream movies on VHS were rather expensive to purchase back then, but there were plenty of cheap public domain movies to be had.

I noticed that one of the actresses who kept cropping up in these low-budget tapes was Jean Parker. She starred in such famous public domain films as FLYING DEUCES with Laurel & Hardy, ONE BODY TOO MANY with Bela Lugosi, and BLUEBEARD with John Carradine. In the 1930s Parker had appeared in such major pictures as LADY FOR A DAY and RASPUTIN AND THE EMPRESS, but for whatever reason she was relegated to Poverty Row titles in the 1940s.

It's hard to understand, at least from my viewpoint, why Parker didn't become a major Hollywood star. She was very pretty, with a nice figure, and she had an appealing personality. She was also a more than capable actress who could handle drama and comedy. The lady herself must have been disappointed at her lack of major roles, since she left Hollywood in the mid-1940s and concentrated on stage work. 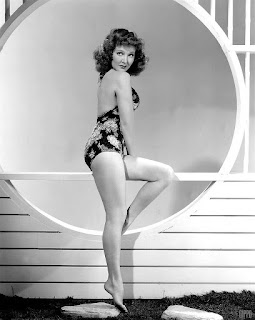 
The actress did get to play a kind-of recurring series role for Monogram in the character of Kitty O'Day. The two Kitty O'Day features are among those many black & white low-budget flicks that I watch on YouTube while trying to get to sleep.

DETECTIVE KITTY O'DAY was made by Monogram in 1944. In this one Kitty is the secretary to a business executive named Wentworth. Kitty's boyfriend Johnny Jones (Peter Cookson) is an accountant dismayed by Wentworth's overwork of Kitty. Kitty is told by her boss to come over to his house after hours to do even more work, and while there she discovers the man hanged. Both Kitty and Johnny--who was handling a large amount of securities for Wentworth--wind up becoming suspects. Kitty decides to try and capture the real culprit, dragging along an exasperated Johnny. The duo's investigations wind up getting them into more trouble, since wherever they go another dead body pops up.

DETECTIVE KITTY O'DAY tries very hard to be like one of those screwball comedies of the 1930s. The movie is only an hour long, and it thankfully moves at a accelerated clip. There's a lot of rapid-fire dialogue exchanges between Kitty, Johnny, and a frustrated police inspector named Clancy (played by Tim Ryan, who co-wrote the screenplay). Clancy has a dumb associate named Mike (dim-witted cops were a dime a dozen in movies like this). The comedy quotient in this is higher than the usual Monogram picture, but it is on the level of a mediocre Three Stooges short. At one point Kitty and Johnny disguise themselves as part of the cleaning staff at a high-rise apartment building, and they wind up getting stuck outside on the building's ledge, but the sequence goes on too long to be effective. The mystery isn't all that hard to figure out, simply because there's not that many leading characters, and about half of them get killed.

Jean Parker carries this film--the character of Kitty would have come off as simply annoying if played by an actress who wasn't as charismatic. We are first introduced to Kitty as she is listening in to her boss' conversation with his wife, a great way to show the audience how noisy she is. Kitty is constantly interrupting people and finishing their sentences, and her deductive "skills" are rather lacking. Whenever Kitty does discover a corpse, she faints. She solves the case basically by happenstance. It is Jean Parker's combination of looks, gumption, and personality that make Kitty tolerable.

DETECTIVE KITTY O'DAY was directed by William Beaudine, who worked on dozens and dozens of similar Poverty Row titles. He would also direct the follow-up film, ADVENTURES OF KITTY O'DAY, which I will discuss in a later blog post.