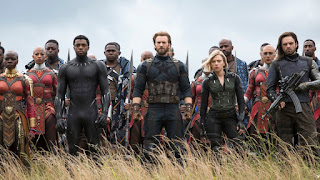 A full decade of the Marvel Cinematic Universe has led up to this. After years of being teased about Thanos and the Infinity Stones, AVENGERS: INFINITY WAR lets them both loose against nearly every Marvel superhero character that has appeared in a live-action theatrical film (with a few notable exceptions--such as the X-Men, of course).

It seems that almost every month a new superhero/comic book film comes out, and the storyline deals with a situation that threatens the entire world. AVENGERS: INFINITY WAR ups the ante by dealing with a threat to the entire universe. This is an MCU movie that resides on a different level than the rest. From the very first scenes, the Russo Brothers (directors of my favorite MCU entry, CAPTAIN AMERICA: THE WINTER SOLDIER) make very clear that the stakes are much higher, and no character is safe. There's a fair amount of humor in this film, especially in the sarcastic exchanges among the many heroes--but don't let that fool you. This is the darkest Marvel production yet--a sense of doom pervades throughout.

When I first saw the teaser trailer for AVENGERS: INFINITY WAR, I thought the promotion of Thanos to a major role would be a disappointment. Another larger-than-life CGI-realized villain with supposed unlimited capabilities??? I have to say that Thanos didn't turn out as bad as I thought he would. He's given more of a background than the usual comic book movie bad guy, and he's allowed to be more articulate. The script goes out of its way to try and explain his motivations to the audience. Due to Thanos' alien origins, AVENGERS: INFINITY WAR has a very cosmic influence to it--the major Earthbound element in the picture is a fantastic battle sequence set in Black Panther's homeland of Wakanda.

Also adding to the cosmic vibe is the highlighting of the Guardians of the Galaxy gang, who play a far bigger role in the story than I would have expected. (They play so much of a role that at times one wonders if the movie should have been called GUARDIANS OF THE GALAXY 3.) I assume that the characters who didn't get all that much screen time here--such as Captain America and Black Widow--will get more of a showcase in the next Avengers film, which will directly continue on from this one. Truthfully though all the various superheroes get a chance at the spotlight, and the Russos (and their editors) did a superlative job keeping things in sync while juggling all sorts of plot points.

If there's one thing in the film that might be a problem, it's the ending. I'm certainly not going to discuss it here in detail....but it is a climax that will either shock you, anger you, or cause you to say, "Is all of this just a cheat??" However you feel about it, it's a hell of a cliffhanger.

AVENGERS: INFINITY WAR had a lot to live up to, and from my perspective it did. It's a true kick-ass franchise blockbuster--entertaining, exciting, and surprising. I plan on seeing it multiple times.
Posted by Dan Day, Jr. at 6:39 PM