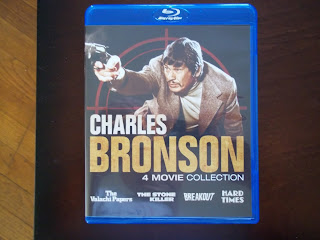 Mill Creek brings out another bang for your buck home video release with the two disc "Charles Bronson--4 Movie Collection" Blu-ray set. Most shopping sites are selling it now for around $10.

The set features four films made during the 1970s, the period when Charles Bronson became a true leading man international movie star. Bronson had appeared in some of the greatest films made in the 1960s--THE MAGNIFICENT SEVEN, THE GREAT ESCAPE, THE DIRTY DOZEN, ONCE UPON A TIME IN THE WEST--but always as part of an ensemble cast. The Seventies saw him become an action superstar able to carry a film in his own right. In earlier times the actor would have been a very unlikely hero--he certainly didn't look or behave like a typical good guy. But the cinema of the 1970s was far more receptive of unusual or unique performers, and Bronson's tough, taciturn style holds up better today than many of his more renowned contemporaries.

The four films in the set are HARD TIMES, BREAKOUT, THE STONE KILLER, and THE VALACHI PAPERS. There are two films on each disc. The set that I received has HARD TIMES and BREAKOUT on the disc that has THE STONE KILLER and THE VALACHI PAPERS listed on it! Good old Mill Creek...I'll be covering that disc on this blog post, and the other two films on Part Two.


HARD TIMES
This movie is notable as the directorial debut of Walter Hill, who also worked on the script. Set during the Great Depression, Bronson's character in this one is a man named Chaney, who tries to make some money participating in bare knuckle street fights. Chaney hooks up with a con-artist promoter named Speed (James Coburn), and the two start to have some success--but Speed's irresponsible ways put the duo in financial and mortal danger.
HARD TIMES is a very fine film, directed in a no-nonsense, straightforward style by Hill (who makes impressive use of the Louisiana locations). The fight scenes are filmed in a brutally direct manner (no showy editing, no outlandish camera angels, and no unbelievable punch exchanges). Clean-shaven, blandly dressed, and with a short haircut, Bronson looks as if he stepped out of a 1930s photograph. He also shows off how great of shape he was in, despite the fact that he was in his early 50s when this movie was made. (The original ROCKY came out a year after HARD TIMES, and I bet Bronson could have easily kicked Sylvester Stallone's ass.)
This movie will be very frustrating for modern viewers, mainly because there is no background information given on Bronson's character. It's fitting that the guy's name is Chaney, since Bronson has so little dialogue it almost counts as a silent performance. But one of Bronson's strengths as an actor was that he could convey to the audience what his character was thinking without talking very much. James Coburn gets most of the dialogue as the fast-talking Speed, a fellow who is more mouth than achievement. Strother Martin does his usual scene-stealing tricks as Chaney's cut man, and Bronson's wife Jill Ireland plays a down-on-her-luck lady who catches Chaney's eye. HARD TIMES is the type of film mainstream Hollywood used to make fairly regularly--a low-key, well-made, simple tale that didn't try to pretend to be any more than it was.

BREAKOUT
If you just go by the plot description for this film--Jill Ireland hires disreputable pilot Charles Bronson to get her husband Robert Duvall out of a Mexican prison--you'd think this was a hard-edged thriller. In actuality, the movie has a very inconsistent tone to it. Instead of his usual strong, silent self, Bronson's Nick Colton is a shifty amiable redneck who seemingly takes on the job of risking his life infiltrating a South of the border hellhole simply because Jill Ireland's worried wife thinks he can't pull it off. This movie is a bit of a stretch for Bronson (I wonder if that was why he agreed to do it in the first place), and while it's fun to see him defy expectations, I'm sure some of his more ardent fans might be disappointed. (In all honesty, Bronson's role would have been perfect for Burt Reynolds.)
The combination of goofy comedy (Bronson's buddy here is Randy Quaid, which should tell you something) and the horrid plight of Robert Duvall's character makes for an uneasy mixture. For the entire movie, we are constantly told that Bronson's task is basically impossible, but he winds up getting in and out of the place quite easily (with use of a "borrowed" helicopter). Robert Duvall doesn't have much to do other than look miserable, and the script seems to suggest that the characters played by Ireland and Bronson might be interested in one another, but that doesn't go too far. John Huston has a small role as Duvall's grandfather--the man who set him up!
BREAKOUT has some intriguing possibilities, but it wastes them by choosing to go down a goofy route too many times instead of an adventurous one. There is a rather striking "Bad Guy gets killed in a outlandish way" scene, though.

Both films are presented in 2.35:1 anamorphic widescreen and 2.0 stereo. The two pictures look and sound great, HARD TIMES especially. There are absolutely no extras--not even a chapter menu.