THE LOVES OF EDGAR ALLAN POE 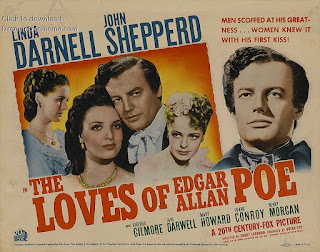 One would think that a movie biography on the life of Edgar Allan Poe would feature all sorts of dramatic highlights. The story of a genius writer, beset by a number of personal and professional problems, sounds tailor-made for a cinematic adaptation. THE LOVES OF EDGAR ALLAN POE, a 1942 production from 20th Century Fox, is a rather turgid affair, and not nearly as exciting as one of the great author's famed tales.

One thing that does need to be said about the movie is that it gets a number of historical details about Poe correct. We are introduced to Poe as a young boy, when, after the death of his actress mother, he is taken in by a distinguished couple from Virginia, the Allans. Poe's foster mother dotes on the boy but his foster father dislikes the young man's dreamy attitude. As Poe (now played by Shepperd Strudwick, under the name "John Shepperd") gets older, he wants to be a writer, while the stuffy Mr. Allan demands he study law. Poe breaks away from his foster family and goes off on his own, gaining (and losing) various literary posts due to his wayward personality. Despite his dysfunctional lifestyle, Poe always has the loyalty of his very young wife, his first cousin Virginia (Linda Darnell). Poe's inability to find steady work, and his wife's tragic illness, finally send the writer into a fatal downward spiral.

THE LOVES OF EDGAR ALLAN POE attempts to "explain" the writer's personal problems. It's suggested that since Poe was the child of itinerant actors, he inherited a wandering and dreamy attitude toward life. In other words, Poe is "sensitive", which may be why all the women in his orbit--his foster mother (Mary Howard), his first love (Virginia Gilmore), his aunt (Jane Darwell), and his wife--absolutely adore him and defend his actions. (They also refer to him as "Eddie".) It's reminiscent of the old cliche about good girls making excuses for the cute bad boy. Shepperd Strudwick is okay as Poe, but his portrayal of the great writer doesn't have a lot of fire to it. His Poe is moody and distant instead of dynamic. There's a couple of times where Poe in this movie gets into fights, and Strudwick looks very uncomfortable throwing a punch. Strudwick does have a fine speaking voice, which certainly helps when he is reciting "The Raven".

I've waxed rhapsodic about Linda Darnell's beauty on the blog before, and it goes without saying that once again here she is simply stunning to look at. One does have to question her character's mental state, since her beloved husband can't keep a job, can't take care of simple household matters, and goes off and gets drunk every so often. Even when Darnell is malnourished and lying in her deathbed (due to the fact that Poe doesn't have enough money to buy food or medicine), she still has faith in her husband's talent. Watching Darnell is the best thing about this film--even when she's dying she appears ready for a photo shoot.

Like most movies made at a major Hollywood studio in the 1930s-40s, THE LOVES OF EDGAR ALLAN POE features many fine supporting players, such as Morris Ankrum, Francis Ford, and a very, very young Harry Morgan. During the film there are also "cameos" from such famous personages as Thomas Jefferson (Gilbert Emery) and Charles Dickens (Morton Lowry). Both men meet up with Poe and offer him encouragement--maybe they should have just slipped the poor guy a couple bucks instead. The film has a very brief running time (68 minutes), and it was generically directed by Harry Lachman.

THE LOVES OF EDGAR ALLAN POE isn't anywhere near as entertaining or atmospheric as the many movie versions of the writer's work. But it does convey the idea that you can be a irresponsible wastrel and still have someone as gorgeous as Linda Darnell be infatuated with you.
Posted by Dan Day, Jr. at 2:05 PM