A LADY TAKES A CHANCE On Blu-ray From Kino 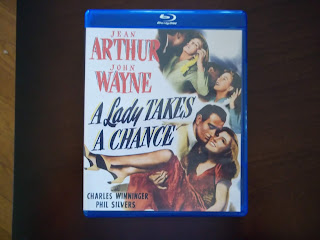 Not that long ago on this blog I posted lists of my favorite actors and actresses. John Wayne and Jean Arthur appeared on those lists, so it's only natural that I purchased A LADY TAKES A CHANCE, a 1943 film starring the duo, on Blu-ray.

The movie details the adventures of one Molly Truesdale (Jean Arthur), who leaves New York to venture out west on a bus tour. Molly literally runs into rodeo competitor Duke Hudkins (John Wayne) and she's instantly smitten, but the big cowboy has an equally big independent streak. The typical classic Hollywood plot conventions ensue before the couple can have a happy ending.

There's nothing innovative or extraordinary about A LADY TAKES A CHANCE--but it is a pleasant, easygoing tale that works due to the charisma and talent of its leading lady and man. Almost all of the expected romantic comedy elements are here--couple meets cute (Duke falls on top of Molly during a rodeo), they have a big misunderstanding, they then act as if they don't care for another even though they obviously do, and then they both go to extremes to be with each other. Arthur and Wayne are so warm and likable that one doesn't mind the predictability of the plot.

The film was produced by Arthur's then-husband Frank Ross, and it definitely plays to her strengths. As usual she's endearingly funny and cute, and you can't help but be charmed by the way she uses her off-kilter voice like a musical instrument. This is Arthur's show all the way--John Wayne hadn't reached true major stardom at this point yet. The Duke does do a very fine job here, however--he and Arthur have great chemistry together, and with his somewhat low-key performance, he shows that he could handle being a light comedic romantic leading man. Some of the more ardent Wayne fans might quibble that this is not a true "John Wayne" picture, but it does show that as an actor the Duke was far more versatile than most give him credit for (and he does get to participate in a barroom brawl).

The movie also features Charles Winninger as Duke's partner, and the legendary Phil Silvers in a small but notable role as a tour guide. Director William Seiter does a more than capable job--he keeps things centered around the two main stars, the way it should be. The story is set in 1938--I assume this was done so the story did not have to deal with WWII.

Kino presents A LADY TAKES A CHANCE in a very fine-looking black & white print. There are no extras, except a few trailers for other Kino product. An audio commentary from a reputable classic film historian would have been very welcome here. The back of the disc cover sleeve does feature a very nice poster for the movie. 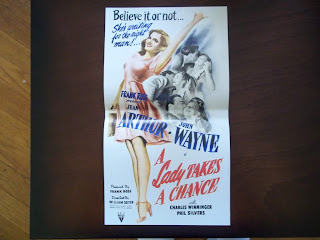 
A LADY TAKES A CHANCE is very much a product of classic Hollywood. It's a light-hearted enjoyable tale showcasing two major cinema legends.