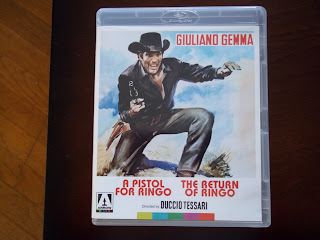 The name "Ringo" has been used in the title of many a Spaghetti Western, just like "Django", "Sartana", "Sabata", etc.The films included on this disc are the first two Euro Westerns to use the name. Duccio Tessari wrote (or co-wrote) and directed both titles--A PISTOL FOR RINGO and THE RETURN OF RINGO. The films were released in 1965, ahead of the Spaghetti Western explosion of the late Sixties. Because of this, the films have a number of striking differences from the usual fare that is associated with the genre.

Duccio Tessari did some uncredited script work on Sergio Leone's A FISTFUL OF DOLLARS, but his own Western directorial debut has its own style. A PISTOL FOR RINGO is not only more lighthearted (despite all the violence going on), it is also a far more colorful film, and the cast is much better dressed, and a lot cleaner looking. Giuliano Gemma as Ringo (also known as Angel Face--the actor was a handsome fellow) is introduced playing hopscotch with a bunch of kids. Four angry gunslingers try to interrupt his game, but Ringo shoots them down with very little effort. The local sheriff (George Martin) puts Ringo in jail, but the angel-faced gunman is let out to infiltrate a band of Mexican bank robbers who have taken refuge at the large ranch of a Major Clyde--and the Major's beautiful daughter just happens to be the sheriff's fiancee. Ringo deals with the bandits in his own inimitable way, which consists of more fast-talking than fast gun play.

I had never seen A PISTOL FOR RINGO (or THE RETURN OF RINGO, for that matter), and, having viewed dozens and dozens of other Spaghetti Westerns, I already had fixed expectations for it. I have to say that most of those expectations were proved wrong. The clean-cut Ringo character (in this film at least) is about as far away from The Man With No Name as you can get. Gemma's Ringo can certainly handle himself when it comes to physical action (the actor had worked as a stunt man) but he'd much rather get out of a dangerous situation by using guile--or his mouth. (In this picture Ringo has more dialogue than about 20 Spaghetti Western leading men put together.) Ringo is a milk-drinker, and he doesn't even take the opportunity to romance the sheriff's fiancee. Gemma was a naturally charismatic performer and the camera loved him, so it's no surprise he became a European movie star due to his Ringo movies. Gemma is billed in them as "Montgomery Wood".

One other aspect of A PISTOL FOR RINGO that makes it stand out from films of its type is that it features two strong female roles. Lorella De Luca (who was married to Duccio Tessari at the time) plays the sheriff's fiancee, and sultry Nieves Navarro is one of the leaders of the bandit gang. The characters of both women are not just attractive--they can also take care of themselves. For me Navarro steals the show. She's a tough bandit when she needs to be, but she starts to show a more refined side when she is wooed by Major Clyde during the siege of his ranch. De Luca and Navarro would have major roles again in THE RETURN OF RINGO--as a matter of fact, the casts for both Ringo movies are essentially the same, other than the actors play different (though similar) roles in each. Fernando Sancho plays the Mexican bandit chief in both titles.

A PISTOL FOR RINGO is very well directed by Duccio Tessari, with many very fine compositions by cinematographer Francisco Marin. Most future Euro Westerns would have a sparse, arid look, but A PISTOL FOR RINGO the Spanish countryside actually appears warm and inviting. There's plenty of action sequences, and they are handled very capably--but they're not as outlandish or brutal as those in typical Spaghetti Westerns. The movie is gifted with a Ennio Morricone score, which even has a title song called "Angel Face" sung by Maurizio Graf.

THE RETURN OF RINGO has a character called Ringo, and he's played by Giuliano Gemma...but he's not the same person that was in A PISTOL FOR RINGO. Confused? Well, don't be....all the other Spaghetti Westerns that had "Ringo" in the title had nothing in common with each other either. This Ringo (real name Montgomery Brown) has just returned to his hometown in New Mexico from the Civil War, only to find out that it has been taken over by Mexican bandits. Ringo disguises himself as a poor peasant, and finds work assisting a florist! Ringo learns that his wife (Lorella De Luca) has been led to believe that he died in the war, and she's now being pressured to marry the arrogant brother (George Martin) of the bandit chief (Fernando Sancho). The fact that the Browns have a small daughter (who Ringo has never seen, since she was born while he was at war) complicates matters. Ringo bides his time and allows himself to be humiliated while he plots his revenge.

THE RETURN OF RINGO has a far different tone and approach than A PISTOL FOR RINGO. It feels more like what one expects from a Spaghetti Western. Ringo Mach II isn't the voluble amiable fellow of the first film. From the very start of the story, when he learns what has happened while he has been away, the poor guy is almost mentally broken. His taking on the persona of a pathetic peasant doesn't help his attitude--neither the fearful citizens of the town or the vicious bandits have any respect for him. It's not until the end of the story that Ringo gets a chance to fully strike back. The somewhat playful sensibility that Duccio Tessari brought to A PISTOL FOR RINGO is absent here--even Ennio Morricone's score has a mournful quality to it. Ringo is basically a dark avenger, and his boyhood home has become a windswept ghost town where folks are gunned down in the streets.

One of the few townspeople willing to help Ringo is the seductive fortune teller Rosita, played by Nieves Navarro, who once again steals the film. (She even gets to perform a sexy flamenco dance.) Navarro had already made a major impression on me when I watched her play the cruel widow in THE BIG GUNDOWN. She later gained cult fame for appearing in numerous giallo films under the name "Susan Scott". In the extras on this Blu-ray, Lorella De Luca is interviewed, and she admits that she and Navarro didn't get along too well--and I can totally understand why, since De Luca's husband Duccio Tessari went out of his way to showcase Navarro in both Ringo pictures.

Once again director Tessari and cinematographer Francisco Marin do an excellent job staging scenes and setting up shots. THE RETURN OF RINGO shows off Duccio Tessari's versatility--other than the Ringo name in the title, and the cast members, it has very little in common with A PISTOL FOR RINGO.

Arrow Video always stacks their home video releases with all sorts of extras, and this one is no exception. It comes with a 44-page booklet in which Italian film expert Howard Hughes writes about the cast for both movies and the history of the studio for which they were made. There's also an interview with Duccio Tessari. The featurettes include an appreciation of the films by Tony Rayns, and archival interviews with Giuliano Gemma, Lorella De Luca, and camera operator Sergio D'Offizi. Both movies have audio commentaries by C. Courtney Joyner and Henry C. Parke, and the duo give numerous worthy insights into the films, and they go out of their way to highlight and compliment Duccio Tessari's visual style.

Both movie are presented in 2.35:1 anamorphic widescreen, and they look fantastic. Italian and English soundtracks are provided, along with English subtitles. There's also a lengthy stills gallery, and the disc cover sleeve features reversible artwork.

Arrow Video hits it out of the park once again with this magnificent release. These films are far better than I thought they would be, and I would even venture to say that those folks who are more inclined toward classic Hollywood Westerns might even enjoy them. Seeing these lesser-known Spaghetti Westerns uncut, in widescreen, and in the best presentation possible, makes one realize that the generic idea that these movies were just violent over-the-top junk is far from accurate.