My latest YouTube discovery is a 1934 programmer called TAKE THE STAND. A murder mystery based on a novel written by Earl Derr Biggers (the creator of Charlie Chan), the film stars one of my favorite classic Hollywood ladies, Thelma Todd.

TAKE THE STAND was made by an independent company called Liberty, and it was directed by B movie veteran Phil Rosen. The story, set in New York City, features a notorious gossip columnist named George Gaylord (Jack La Rue). The muckraker has a large readership, and an even larger propensity for ticking off people. His latest enemies include a financier, a crooner, a gangster, and a actor and his wife. Gaylord has even angered his bosses so much at the newspaper he's based at that even they want to figure out some way to void his contract. The columnist is preparing a broadcast over nationwide radio before the Christmas holidays, in which he promises more juicy revelations. His newest enemies gather outside the supposedly locked broadcast room while Gaylord is on the air...and the man is killed, apparently by gunshot. Of course there's more to the case than meets the eye, and a detective (Russell Hopton) decides to solve the murder on his own after quitting the police force when he doesn't agree with their results.

TAKE THE STAND is an okay little low-budget mystery that has a very clever method for murder. Jack La Rue, who usually played gangsters or various other bad guy types, makes Gaylord a slimy, conceited fellow who no one really misses after he's bumped off. After Gaylord's murder about halfway through the film, Russell Hopton takes over as the main focus. He's very good as a no-nonsense investigator who's willing to quit his job in his quest for the truth, but he doesn't have any of the eccentric traits most movie crime-solvers have. This makes one wonder--if TAKE THE STAND had a quirky detective like, say, Charlie Chan...would it have turned out to be a better movie?

Several other 1930s character actors familiar to hardcore movie buffs show up here, including Berton Churchill as the financier, Gail Patrick as his daughter, Paul Hurst as a dopey cop, Jason Robards Sr. and Shelia Terry as the actor and his wife, and Vince Barnett as the gangster's goofy gunsel. The main reason I watched this movie was of course Thelma Todd, and she plays Gaylord's secretary Sally. 1934 was a very busy year professionally for Thelma--she starred in a number of feature films and did considerable work for the Hal Roach Studio. For most of the film one wonders why Thelma took on this role--she doesn't have all that much to do--but her character becomes far more important at the end. It goes without saying that Thelma is lovely as always. 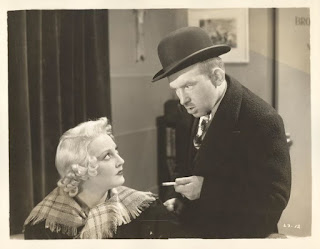 
Phil Rosen handles things in a by-the-numbers manner, but one interesting element the story does have is that it is set right before Christmas (the time period plays an important role in how the murder was committed). At one point Gaylord is taken to Madison Square Garden by his gangster nemesis to see a hockey game--but it's not clear if they watched the New York Rangers or the New York Americans.

TAKE THE STAND is a perfect film to watch on your laptop if you're in bed and trying to get to sleep. The version I saw was 70 minutes long--IMDB lists a running time of 78 minutes, but it didn't seem to me that any major plot developments were missing. Thelma Todd fans might be disappointed that she doesn't get much to do except sit behind a desk, but there is a legitimate reason for that.
Posted by Dan Day, Jr. at 12:52 PM