A STUDY IN TERROR On Blu-ray From Mill Creek 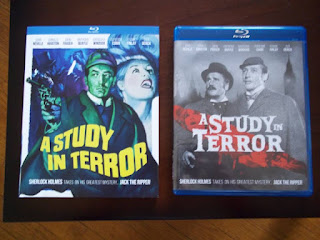 A STUDY IN TERROR is a 1965 British film that brings together Sherlock Holmes and Jack the Ripper. The movie has been released on Blu-ray from Mill Creek Entertainment.

In 1888 London, Sherlock Holmes (John Neville) receives a surgical kit in the mail, postmarked from the district of Whitechapel. It is in that district that a number of horrid murders of prostitutes have been perpetrated, and Holmes becomes embroiled in the case. The Great Detective's investigations lead him to come face to face with the man known as Jack the Ripper.

A STUDY IN TERROR is a mixture of English Gothic, Holmesian mystery, and Ripperology. The idea of Holmes facing off against the Ripper is about as high concept as you can get, and it's no surprise that exploitation film mavens Herman Cohen and Tony Tenser were involved in the production.

The movie has several of the same elements found in other cinematic outings featuring Jack the Ripper--footsteps echoing on wet cobblestone streets, a mysterious man wearing a cloak and a top hat while skulking about carrying a doctor's bag, prostitutes who look like fashion models, and down-and-out denizens of Whitechapel. The Ripper murders included here are quite brutal--one of them, taking place in a water trough, reminds one of a killing in a bathtub shown in Mario Bava's BLOOD AND BLACK LACE. Another one also has a giallo tone to it, as a subjective camera follows English Gothic hottie Edina Ronay up to her room, and she seduces "us" right before she is done away with.

The murders are such a contrast with the scenes involving Holmes that it's almost if they come from different films. John Neville was a distinguished stage actor instead of a movie star, and his Sherlock has been reconfigured into a more mainstream action-oriented leading man. Holmes' eccentricities have been toned down here, but Neville does get to utter many of the Great Detective's famous quotes. This Sherlock also happens to be a rather sharp dresser...at one point Holmes & Watson sport white tie and tails while frequenting a notorious East End tavern. I wouldn't say that Neville is a great Holmes, but I think his performance works within the context of this movie. Donald Houston is Watson, and he plays the Doctor as an old-fashioned fuddy-duddy who seems embarrassed just saying the word "prostitute". Robert Morley is excellent casting as Mycroft Holmes, but the character is portrayed in a almost comedic manner.

One thing A STUDY IN TERROR does have is period atmosphere--director James Hill lays it on rather thick at times. The production design, art direction, and costumes are all first-rate, and cinematographer Desmond Dickinson gives everything a colorful visual flourish. The convoluted story presents a number of red herrings, such as Anthony Quayle as a doctor running an East End charity ward (a very young Judi Dench is his assistant). Adrienne Corri has a small role as the disreputable woman who holds the key to the murders, but she makes a big impression.

Mill Creek presents A STUDY IN TERROR in 1.85:1 anamorphic HD widescreen, and this very colorful film looks fantastic here. As usual with this company, there's no extras--but as you see in the picture above, the Blu-ray comes with a cover sleeve that has different artwork than the actual case. Because this movie has so many classic British horror elements, it cries out for a commentary from someone like Jonathan Rigby.

What holds A STUDY IN TERROR back from being a great film is the inconsistency between the gruesome murders of the streetwalkers and the somewhat lighthearted tone behind Holmes' activities. (A more serious attempt at a Holmes-Ripper story is MURDER BY DECREE.)  I still think it's worth seeing--and this Blu-ray (which can be had now for about $10) is a good buy. The movie has plenty to offer for fans of English Gothic cinema.
Posted by Dan Day, Jr. at 1:37 PM