Last week Turner Classic Movies showed THE END OF THE AFFAIR, a 1955 drama starring Van Johnson and Deborah Kerr. The movie also features Peter Cushing in a major supporting role. THE END OF THE AFFAIR was one of the very few Cushing films I had never seen. (The movie was remade in the 1990s.)

When this movie was being produced in 1954, Peter Cushing was a couple years away from starring in his very first horror film for Hammer, the ground-breaking THE CURSE OF FRANKENSTEIN. In his book THE PETER CUSHING COMPANION, author David Miller suggests that if Cushing had not found success with Hammer, the actor might have spent most of his career playing the type of role he portrayed in THE END OF THE AFFAIR. In the movie Cushing plays Henry Miles, a British civil servant based in London in the 1940s. Henry is decent, quiet, and stable...and unfortunately he's married to a woman that isn't passionate about him.

Henry's wife, Sarah (played by Deborah Kerr) is having an affair with American writer Maurice Bendrix (Van Johnson). Bendrix, who was injured during WWII and discharged, decided to stay in London. He's introduced to Sarah by Henry while doing research on a book about civil servants. The two are immediately attracted to one another, and the film deals with their complex relationship.

If you are a Peter Cushing fan like me, watching THE END OF THE AFFAIR is a frustrating experience. Cushing's character is the only truly decent person in the story, and like most decent people in real life, he gets taken advantage of. Cushing's Henry Miles isn't the main focus of the story--but the two characters who are, the ones played by Johnson and Kerr, are not very appealing. A couple minutes into the story, we are shown Sarah Miles kissing another man in secret at a party, and a couple minutes after that, she's kissing Bendrix. It's hinted at that Sarah has had numerous affairs, and she comes off as a very confused woman. As for Bendrix, he comes off as arrogant and hypocritical (he has no problem loving another man's wife, but he's intensely jealous of her). Bendrix and Sarah spend a lot of time wallowing in self-pity--they obviously want each other, but they're constantly whining about their situation. The two are not exactly the most entertaining couple to watch.

The most important sequence in the story happens when Sarah and Bendrix are spending time together at his flat. The building gets damaged during a German bombing raid, and Sarah believes that Bendrix has been killed. The woman prays that her lover lives--and she promises God that she will end her relationship with the man if he does. Bendrix was just stunned, not killed, and Sarah spends the rest of the movie searching for the "meaning" of it all. This leads her to regular meetings with a priest and an atheist! Sarah draws closer to a true faith in God--but if she does that, she feels that she must reject her lover so she can keep her promise. It's an awkward situation, and it doesn't help that Van Johnson and Deborah Kerr, at least from my viewpoint, do not have strong chemistry together.

After his near-death and his being turned away by Sarah, Bendrix acts more and more like a jerk. He even hires a detective agency to keep watch on the woman--and he presents the findings to Henry in the guise of being his "friend". The man who is given the job to watch Sarah is played by the accomplished English actor John Mills, and he steals the film with his quirky performance. (Mills' character is far more interesting to watch than either Sarah or Bendrix.)

The person who is forgotten about in this entire scenario is Henry Miles. (Sarah and Bendrix seem to see Henry as an impediment to their own personal needs.) When Henry finally realizes that his wife doesn't really love him, he reacts with a silent bewilderment. The scene where Henry almost breaks down and nearly begs his wife not to leave him is heartbreaking, due to Cushing's ability as an actor. Henry's understated love for his wife is far more meaningful--and honest--than Sarah and Bendrix's overwrought affair. What makes it even more heartbreaking is that Sarah doesn't really love--or deserve--Henry. The entire movie is built around Sarah and Bendrix, but it is Henry that one feels empathy for. 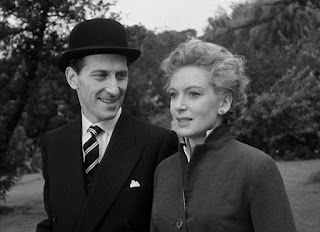 Peter Cushing and Deborah Kerr in THE END OF THE AFFAIR


Is the fact that Peter Cushing is my favorite actor proof that I'm biased in how I view the characters in this movie? Absolutely. Whenever one watches any piece of filmed entertainment, one's personal views on the performers will affect how one appreciates the production. I couldn't help but feel bad for Henry Miles, and feel annoyed toward the man's wife and her lover. But even if I wasn't a major Peter Cushing fan, I probably would have felt the same way.

THE END OF THE AFFAIR was a high-class mainstream production--it was based on a Graham Greene novel, and it was released by Columbia Pictures. It was directed by Edward Dmytryk, produced by David Lewis, and it featured moody black & white cinematography by Wilkie Cooper. It was an important role at this point in Peter Cushing's career, and he more than holds his own against major stars such as Van Johnson and Deborah Kerr.

Unfortunately THE END OF THE AFFAIR is also a turgid and maudlin film. Many Peter Cushing fans wish that the actor had gotten the chance to appear in more normal, mainstream productions. But if he had spent the rest of his career in movies like THE END OF THE AFFAIR, would Cushing have had the reputation he does now? Many of Cushing's lesser horror films are far better remembered today than THE END OF THE AFFAIR.