THE MAN WHO HAUNTED HIMSELF On Blu-ray From Kino 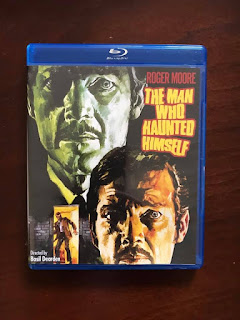 THE MAN WHO HAUNTED HIMSELF (1970) is a somewhat obscure British film that stars Roger Moore. The movie is a quite effective psychological thriller that gives Moore an opportunity to go against his popular image. It has just been released on Blu-ray by Kino Lorber.

Moore plays Harold Pelham, a staid London businessman who almost dies due to a car crash. After his recuperation, Pelham returns to work, seemingly ready to return to his regular routine...but the man is troubled by various people claiming he was involved in incidents and situations that he has no recollection of. Pelham can find no explanation for these incidents, and he starts to wonder if someone is impersonating him...or is he going mad? Pelham desperately searches for an answer, while his once carefully controlled world spirals more and more out of control.

I'm not going to say too much about the storyline of THE MAN WHO HAUNTED HIMSELF, since the movie is not well known, and I don't want to give anything away. Suffice to say that the plot is very intriguing, and the ending has plenty of ambiguity so that each individual viewer can come to their own conclusions about what really happened. Pelham's plight gives the audience plenty to wonder--is the man being set up? Does he really have a double? Or is he still on the operating table after his car crash, and is this all in his mind? The only clue I will give if you do watch this is....pay very close attention to Pelham's actions right before his car crash--it will provide you a glimpse at what is to come.

What I can talk about is Roger Moore's excellent and eye-opening performance. This is a Roger Moore character that will be unfamiliar to most--Pelham is a button-down, conservative type, and he actually has a real job (albeit an upper-class one). He also has a mustache, and it took awhile for me to get used to Moore with one. Pelham is also a married man with a family, and his wife seems a bit bored by him--that certainly isn't the Roger Moore we've come to expect. We do expect Moore to be totally at ease with himself and any situation he faces--and Pelham definitely is not. As things get stranger and stranger around him, Pelham becomes more and more anguished and afraid. It's disconcerting to see Moore in a state of emotional weakness, and he makes the viewer feel his pain and confusion. What's ironic is that when we are introduced to Pelham's "double", he acts much the way we assume a typical Roger Moore character would act. THE MAN WHO HAUNTED HIMSELF contains one of Moore's best acted roles, and certainly his most unusual one.

As to be expected from a British film made during this period, THE MAN WHO HAUNTED HIMSELF has a very capable supporting cast, featuring Hammer veterans such as Thorley Walters, John Carson, and Charles Lloyd Pack. The actor who grabs the most attention, despite his small role, is Freddie Jones. Jones plays a psychiatrist who the distraught Pelham finally goes to, and one immediately gets the feeling that the healer needs to heal himself. Jones has always had a somewhat odd acting style--but here it's like he's Freddie Jones to the power of 10. Not only do you get his usual quirky facial and body language, you also get a man who wears dark glasses indoors and speaks in a bizarre accent that seems to be a cross between Scottish and Eastern European. I don't know exactly what Jones was trying to do here, but he made himself memorable.

THE MAN WHO HAUNTED HIMSELF was directed by long-time distinguished Basil Dearden. (It would be his last film--Dearden ironically died in a car crash soon after.) Dearden uses a lot of everyday real London locations to define Pelham's life before things go awry. Later in the story more unique camera set-ups are used. The script (credited to Dearden and Michael Relph) keeps things moving, and always maintains the viewer's interest. (The story this movie was based on was filmed earlier as an episode of ALFRED HITCHCOCK PRESENTS--it's one I have not seen).

Kino's Blu-ray of THE MAN WHO HAUNTED HIMSELF looks fantastic (I must admit that since I had never seen the movie before, I really don't have any other version to compare it to). A short featurette is included in which filmmakers Joe Dante and Stuart Gordon discuss the movie, along with a few trailers for other Roger Moore films released by Kino.

The main extra is an audio commentary with Roger Moore and Bryan Forbes, who was executive producer of the movie (Forbes says during it that he also worked on the screenplay). The talk is moderated by Jonathan Sothcott. Moore and Forbes have plenty of great stories to tell, but unfortunately Sothcott keeps steering the pair away from the film. Moore does relate how proud he is of the movie and his performance. (During the talk Moore mentions a movie that is supposed to come out in 2002, so I assume that's when it was recorded.)

THE MAN WHO HAUNTED HIMSELF deserves far more attention than it has gotten, and hopefully this Blu-ray will allow that to happen. It's a fine, well-made film that makes the audience think, and it has a truly out-of-the-box performance from Roger Moore.