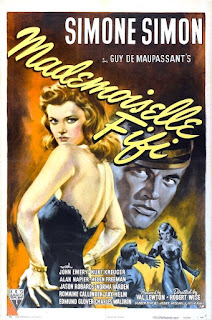 This month being October, one naturally thinks about classic horror films. Producer Val Lewton is most famous for the series of thrillers he made at RKO in the 1940s. Writer Guy de Maupassant penned many renowned tales of terror. MADEMOISELLE FIFI is a 1944 film that Lewton produced based on two of de Maupassant's stories, but it has nothing to do with classic horror.

The movie is set in 1870, during the Franco-Prussian War. In an area of France occupied by the Prussian army, a young and pretty laundress named Elisabeth (Simone Simon) refuses to fraternize or work for the invaders. Traveling back to her hometown on a coach, Elisabeth is looked down on by her fellow passengers. While stopping over at an inn, the coach is held up by an arrogant Prussian officer (Kurt Kreuger). The officer will let the coach and its passengers continue if Elisabeth agrees to have dinner with him. The woman refuses, but is eventually cajoled into doing so by her fellow travelers. At dinner, Elisabeth fends off the officer's advances, but in the morning, as the coach leaves, the passengers look down on her even more. The Prussian officer is also on the journey, and Elisabeth is fated to encounter the man once again, this time with more dramatic results.

MADEMOISELLE FIFI has obvious parallels with WWII, with "Germans" (Prussians) occupying France, and ordinary citizens dealing with the situation in different ways. Kurt Kreuger's Prussian officer is blond, clean cut, and disdainful fellow who acts more like a contemporary Nazi than a 19th Century military man. Simone Simon's Elisabeth is portrayed as patriotic and courageous compared to her fellow coach passengers, who are middle-aged, well-off, stuffy, and silly. But even the poor women who work alongside Elisabeth in the laundry are shown as more than willing to receive favors from their Prussian occupiers.

In Guy de Maupassant's story the character played by Simone Simon was a prostitute. This would not have been allowed in 1944 Hollywood, but one wishes it had for this particular film. As soon as Elisabeth gets on the coach the other passengers treat her as if she has some disease, which doesn't make much sense even if she's "only" a lowly laundress. (What makes the travelers' attitude even more puzzling is the fact that Simon is the best looking person in the movie.) The idea that a prostitute would be the one person brave enough to stand up to the Prussians, instead of the supposedly respectable folk, would have had much more dramatic weight. (By the way, the title MADEMOISELLE FIFI does not refer to Elisabeth...it is the nickname of the Prussian officer!)

Simone Simon made a major impression in Val Lewton's CAT PEOPLE due to her combination of innocence and exotic sultriness. She's effective in MADEMOISELLE FIFI, but she doesn't get a chance to be sultry--her Elisabeth is prim and proper (was this to alleviate any concerns the character might have been a prostitute?). The poster shown above makes Simon appear to be a alluring femme fatale, which she is decidedly not in this film. (Notice how the poster also gives no indication that this movie is set in 1870.)

Val Lewton was a creative and extremely cultured man, and the series of horror films he produced for RKO are filled with all sorts of literary allusions. He must have been excited to do a movie without the horror element attached to it. MADEMOISELLE FIFI is an okay movie, and it is capably directed by Robert Wise, but it needed a larger budget and a larger running time (it is only 69 minutes long) to properly examine all the issues in the story. The film is stodgy and preachy at times, and according to my research it was not a box-office or critical success. One can imagine that the RKO executives had no idea what to do with it. MADEMOISELLE FIFI shows that even when Val Lewton wasn't dealing with a tale of atmospheric horror, he still approached things in an unusual and off-beat manner.
Posted by Dan Day, Jr. at 1:39 PM