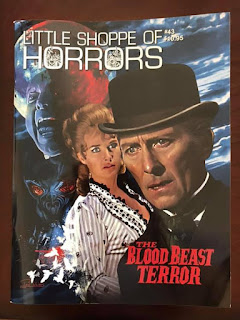 The latest issue of Richard Klemensen's LITTLE SHOPPE OF HORRORS, #43, is chock full of goodies. Two films are exhaustively covered in this issue. The first one is CHILDREN OF THE DAMNED, the almost-forgotten sequel to the original VILLAGE OF THE DAMNED.

The second is THE BLOOD BEAST TERROR, a 1967 low-budget English Gothic from Tigon Films. The fact that this movie gets featured on the cover of the new issue of LSOH may surprise many. (The above cover artwork is by Paul Watts). THE BLOOD BEAST TERROR has a decidedly unsavory reputation. When is it examined in books and magazines, it is usually the subject of derision. The film's star, Peter Cushing, was alleged to have said it may have been his worst movie--and this was during the making of it! (One has to realize that this was before Cushing worked on such truly awful films as TENDER DRACULA, SHATTER, and LAND OF THE MINOTAUR.)

Set sometime in Victorian England, THE BLOOD BEAST TERROR tries to follow in the Hammer Horror tradition, but it has neither the style or flair to do so. The plot concerns a Dr. Mallinger (Robert Flemyng), who, for some inexplicable reason, has turned his beautiful daughter Clare (Wanda Ventham) into a human/giant moth hybrid. (That is, if she is his real daughter--more on that later.) The creature kills a number of young men for their blood, and the murders gain the attention of local Police Inspector Quennell (Peter Cushing). Mallinger and his creature flee the area, but Quennell tracks the duo down, and saves his daughter Meg (Vanessa Howard) from their clutches in the process.

THE BLOOD BEAST TERROR is not a good film, but I don't think it deserves to be in the "truly awful" category. It's technically competent, although director Vernon Sewell certainly doesn't go out of his way to make a splash. From my perspective, every scene seems to go on just a bit too long, presumably in order to pad the film's running time. The giant moth costume is mediocre, but the viewer doesn't get to see it all that much. It doesn't even look like what I would imagine a giant moth might be--I think it looks like an alien from a bad third season episode of the original STAR TREK TV show. To many, the disappointment of the giant moth costume is why THE BLOOD BEAST TERROR is rated so badly--but I've seen plenty of just as bad or even worse monster movie makeups. No matter how silly a movie monster may look, you still have to use your imagination on the rest of the film--and if you can't do that, you shouldn't be watching these types of films anyway.

What lifts THE BLOOD BEAST TERROR out of the truly awful category, at least in my estimation, is the performance of Peter Cushing. It's very unusual for an English Gothic horror film to have a police official as the lead character. Typically the main police official in an English Gothic is a supporting role, and whenever he does turn up, it's usually a signal for the viewer to go get some snacks or go to the bathroom. The police official role in an English Gothic is a thankless one, simply because the character spends most of the time trying to find out things the audience already knows. This can sometimes be alleviated by casting a quirky character actor, such as Patrick Wymark or Donald Pleasence.

According to John Hamilton's very thorough and excellent article on the making of THE BLOOD BEAST TERROR for LSOH #43, Peter Cushing had the choice to play either Dr. Mallinger or Inspector Quennell--and he chose the Inspector. I have a feeling that the fact that Cushing had recently worked on the sordid CORRUPTION might have had something to do with his pick. In CORRUPTION Cushing had to go through some very brutal histrionics (and massacre almost the entire cast as well). In THE BLOOD BEAST TERROR Cushing not only gets to play the "good guy", he gets to play a man who is conscientious, even-tempered, and intelligent. Inspector Quennell must have been a walk in the park for Cushing compared to some of his more recent roles. This is not to say that Cushing treated it like a walk in the park--his professionalism was too great for that--but Quennell is probably one of the actor's most normal movie characters, behavior-wise. (Notice in this movie how Quennell is dressed decently, but not as high-class as Cushing's Baron Frankenstein or Dr. Van Helsing--I'm sure that idea came from the actor himself.)

Quennell may be a genial fellow, but Cushing is still able to invest him with some personality. The Inspector has a warm relationship with his daughter, and he shows a wry sense of humor when paired with Sergeant Allan (Glynn Edwards). At one point Quennell's police superior tells him, "Watch those expenses"--Cushing's eye roll in response as he walks away is hilarious. Quennell stills knows how to get the job done, just like all of Cushing's monster fighters. When Quennell figures out the entire plot, Cushing goes through the dialogue so smoothly and effortlessly that you absolutely buy into it--another example of how much value the actor brought to low-budget genre films such as this.

Due to Cushing, this is one monster movie where the audience anticipates seeing the police investigator instead of the scientist or monster. Robert Flemyng brings the same nervy tension to Dr. Mallinger as he brought to the lead role in the infamous THE HORRIBLE DR. HICHCOCK. The role was originally supposed to be played by Basil Rathbone, but he died before shooting began. (One can't help but wonder what it would have been like to have Peter Cushing and Rathbone acting in the same scene.) Since we are told almost nothing about the Mallinger, or why he is performing these experiments, it's hard to have much of any feeling for him. If you like ambiguity in movie plots, THE BLOOD BEAST TERROR has it in spades. There seems to be no reason why Mallinger would want to enable a human to change into a giant moth, or why said human, fully clothed, transforms into a moth with no clothing, and then back into a human fully clothed again. Is Clare his daughter at all?? Is she some sort of totally new creature?? We don't get to find out, but she seems to have more human than moth tendencies. She definitely likes young men as victims, but the script doesn't take full advantage of this. The screenplay was by Hammer veteran Peter Bryan, and it has echoes of both THE GORGON and THE REPTILE. Those films, however, make much more sense. One wishes the story had taken better advantage of Wanda Ventham's sultry nature--what if she tried to seduce her "father", Dr. Mallinger? Or, she tried to seduce Inspector Quennell?? If THE BLOOD BEAST TERROR had been made in the early 1970s, one can easily assume that Clare's human form would have been given a more explicit showcase.

Speaking of exploitation, THE BLOOD BEAST TERROR has very little of it. There's not much gore, and the giant moth attacks mostly happen off-screen. Vanessa Howard is sweetly innocent as Quennell's young daughter, but ironically she would go on to play dangerous teases in movies like MUMSY, NANNY, SONNY & GIRLY and WHAT BECAME OF JACK AND JILL? If she had been used in a certain way, she might have given THE BLOOD BEAST TERROR some much needed spice. The movie does have an old-fashioned air to it, especially when one compares it to the movie Tigon made next--WITCHFINDER GENERAL.

In his LSOH article John Hamilton does a far better job of deconstructing THE BLOOD BEAST TERROR than I ever could. He also gives the reader all the information one could want on the movie. LSOH #43 also has interviews with FX artist Roger Dicken (who made the giant moth costume), director Vernon Sewell, and plenty of behind-the-scenes photos, along with artwork inspired by the movie.

For those wondering why THE BLOOD BEAST TERROR should be given such extensive coverage in a magazine, and a cover story no less, I say...why not?? You can read about the same famous movies over and over again, but I get much more enjoyment learning new information about obscure titles. THE BLOOD BEAST TERROR is no classic, but I'd rather spend nearly 90 minutes watching Peter Cushing as a good guy instead of seeing a generic mainstream title that I'm likely to forget about a couple of days later.