MAN OF THE WORLD 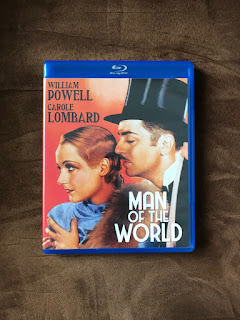 Kino's "Carole Lombard Collection I" Blu-ray set includes MAN OF THE WORLD, a 1931 Paramount film that is known for the first onscreen pairing of William Powell and Carole Lombard.

MAN OF THE WORLD concerns one Michael Trevor (Powell), an American living in self-imposed exile in Paris. Trevor makes his living blackmailing rich Americans who like to have fun in the City of Light. Trevor falls in love with young Mary Kendall (Carole Lombard), the niece of his latest victim, and starts to think he can quit his nefarious activities and go back to having a normal life. But Michael's con artist partner Irene (Wynne Gibson) wants him for herself, and she puts doubts in his mind about any rehabilitation.

William Powell is the real highlight of MAN OF THE WORLD, and he elevates it from being a run of the mill melodrama. Powell's Michael is dapper and suave on the outside, but on the inside he can't stand what he has become. Powell ably shows Michael's mixed emotions, and he's helped by Herman Mankiewicz's script, which allows the character to wax philosophical at times. Despite Michael's "profession", the man has a strange code of honor which sets up a very somber climax.

Carole Lombard is a ray of sunshine in this movie, and she's helped out by being provided with a series of flattering outfits to wear. She's constantly gazing at Powell in admiration, which is quite understandable considering the couple would be married soon after this movie was released. There isn't much to the role of Mary Kendall, but Lombard is so appealing here that it's totally believable Powell's Michael would change his ways and put himself at risk for her.

Wynne Gibson plays the "other woman", and she takes what might be looked upon as a bad girl role and makes it sympathetic. It's always welcome to see Guy Kibbee, who plays Mary's uncle. The movie was directed by Richard Wallace, and he smartly keeps the focus on Powell and Lombard.

Kino presents MAN OF THE WORLD in a 1.20:1 aspect ratio. The picture quality is very good, if a bit soft at times. (This film was released on a Carole Lombard DVD set from Universal a few years ago.)

New to this release is an audio commentary by Samm Deighan. This is a rambling talk, with Deighan trying to cover a number of subjects (such as the director, writer, Powell, Lombard, Pre-Code, etc.).

MAN OF THE WORLD is more notable for what was going on with William Powell and Carole Lombard behind the cameras. It's a decent tale, without any Pre-Code excesses. It's also features another example of Powell's smooth and unaffected acting style.