The title for this one doesn't lie. There is a white woman, in the luxurious form of Carole Lombard. WHITE WOMAN is a 1933 potboiler produced by Paramount and set in Malaya, although the shooting locations are strictly indoor studio jungles.

In Larry Swindell's excellent biography of Lombard, SCREWBALL, the author describes WHITE WOMAN as "trash". Carole plays Judith Denning, a cafe singer who has bounced around from one South Seas port to another, due to her bad reputation. (Judith's husband committed suicide years ago, and somehow the blame for the act fell on her.) Judith is about to be deported again when she catches the eye of Horace Prin (Charles Laughton), a bizarre-looking (and acting) owner of a large rubber plantation in Malaya. Judith agrees to marry Prin, and he takes her to their new home--a large houseboat. Judith soon realizes her situation hasn't improved very much, but she soon takes a fancy to Von Eltz (Kent Taylor), the overseer of the plantation. The quixotic Prin sends Von Eltz away to the far reaches of his spread to break up the relationship, but the new overseer (Charles Bickford) takes a shine to Judith as well. Prin winds up offending the natives who work for him, and they attack, causing Von Eltz to take Judith away.

After reading a description of the plot of WHITE WOMAN, one can imagine all sorts of salacious events that could be presented in the story, especially since this is a Pre-Code film. The reality is that WHITE WOMAN isn't all that lurid (there is a human head thrown through a window, though). Lombard and Kent Taylor spend a lot of time gazing at each other, but they don't set off a lot of sparks. For all the danger that Lombard is supposedly in, due to her being a beautiful blonde white woman in a steamy remote setting surrounded by desperate men, she has plenty of time to lounge around with perfect hair and makeup. 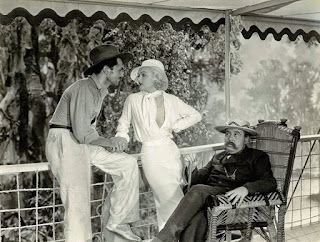 Charles Laughton is the true star of this film, and he provides enough ham to serve fifty different Easter Sunday dinners. His Horace Prin is described as the "King of the River", a feared man who has the natives under his thrall and his white employees in constant dread. Yet Laughton for the most part plays Prin as a buffoon, with a sloppy Cockney accent, Chester A. Arthur-style whiskers, and various W.C. Fields-like under-the-breath sarcastic mutterings. It's hard to believe this guy could command the office water cooler. Laughton and Lombard make one of the most unlikeliest screen couples ever--and ironically, they would again a few years later in a movie called THEY KNEW WHAT THEY WANTED (which I have not yet seen).

Kent Taylor is another of those many 1930s leading men with a mustache who don't make much of an impression (for whatever reason Lombard would be stuck co-starring with a lot of these guys in her movie career). Charles Bickford doesn't show up until late in the tale, but he brings plenty of needed vitality as the cocky tough-talking new overseer (he should have been the one to play Horace Prin).

WHITE WOMAN was directed by Stuart Walker, who is best remembered now for helming Universal's WEREWOLF OF LONDON. Walker lets Laughton's scene-chewing and Lombard's beauty dominate the proceedings. The movie is only 68 minutes long, but it still drags in spots. It feels as if it's set up to be in the same manner as the work Josef von Sternberg was doing for Paramount at the same time. WHITE WOMAN, however, doesn't have von Sternberg's visual and atmospheric intensity.

As for Carole Lombard, WHITE WOMAN was another of the many Paramount features she appeared in that didn't give her a chance to display her natural spontaneity. She looks gorgeous, but she also appears dissatisfied with the whole affair. No doubt she was well aware that Laughton was running away with the show, and her part was not fully developed.