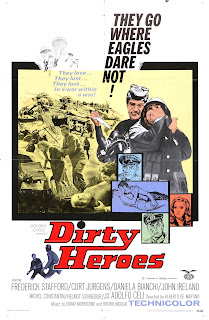 THE DIRTY HEROES is a 1968 Italian-made WWII adventure story. In a review of the film I found on the internet, it was referred to as a "macaroni combat" movie--I assume this was the equivalent of a Spaghetti Western.

In 1945 Holland, three Americans escape from a German POW camp. The group is led by a sergeant, Joe Mortimer (Frederick Stafford, who starred in Hitchcock's TOPAZ). Joe's nickname is "Sesame", because he was a crook and safecracker in civilian life ("Open Sesame"--get it??). Joe finds refuge with a group of Dutch partisans, and plots with their leader (Adolfo Celi) to infiltrate the German headquarters in Amsterdam and make off with a fortune in diamonds that the Nazis have looted from the country. Joe and his crew hope to pull off the perfect crime, but the Dutch resistance has other ideas. There's also a vicious SS colonel who wants the gems for himself, a German general (Curd Jurgens) who realizes the war is lost, and the general's wife, a gorgeous blonde who is actually using an assumed identity because she's really Jewish (Daniela Bianchi).

The American title of this film is obviously supposed to remind one of THE DIRTY DOZEN, but this is nowhere near as brutal as that blockbuster. (The original Italian title of THE DIRTY HEROES is DALLE ARDENNE ALL'INFERNO.) This movie is more like a comic book than a realistic war epic. There's no gore or overt sexual situations, and the overall tone is more James Bond than gritty combat. That's to be expected when one knows that the director. Alberto De Martino, had made Eurospy entries such as OPERATION KID BROTHER and SPECIAL MISSION LADY CHAPLIN (both of which starred Daniela Bianchi).

The movie does make a few twists on the WWII caper formula. One is that Curd Jurgens' General is a man who just wants the war to end, and also wants to avoid any unnecessary bloodshed. The General also does not treat Bianchi like a trophy wife--he genuinely loves her. Bianchi is stunning as always--she gets to wear several different flattering outfits, but it's hard to believe her character is actually Jewish.

John Ireland plays one of Joe's cohorts, an American pilot who, at one point in the story, is able to fly his reconnaissance plane over the German lines and somehow drop a payload of bombs greater than that of a B-25. English actor Anthony Dawson (DR. NO) plays an American general.

The movie ends with a large-scale battle, featuring paratroopers, bazookas, and tanks (as is usual in this type of picture, the tanks are not of WWII vintage). The print of the movie I watched on YouTube was the full two-hour version, and while the story wasn't spectacular, it did keep up my interest. The print was English dubbed, with Curd Jurgens and John Ireland supplying their own voices.

007 fans will want to check out THE DIRTY HEROES, since it features three actors who played Bond villains (Jurgens, Celi, Dawson) and a Bond leading lady in Daniela Bianchi. Frederick Stafford also played the Bond-like OSS 117 character in a couple of films. The music for the movie was provided by none other than Ennio Morricone and Bruno Nicolai, although I wouldn't call it one of the best scores for either of them.

THE DIRTY HEROES is a diverting tale, with an interesting cast. Just don't expect a hard-edged historically accurate WWII story.