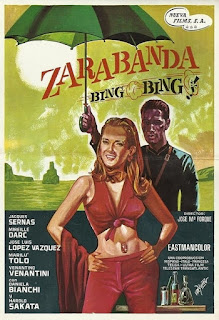 What in the heck is ZARABANDA BING BING?? It's a 1966 Spanish-Italian-French production, with Daniela Bianchi (FROM RUSSIA WITH LOVE) and Harold Sakata (GOLDFINGER). One would expect with those two in the cast, that the movie would be one of those Europsy 007 imitations. It's actually a lighthearted caper story.

A priceless jeweled scepter is found off the coast of Ibiza, and it winds up at the island's museum. A group of motley characters tries to steal it, but they wind up just getting into each other's way.

I have no idea what ZARABANDA BING BING is supposed to mean. This movie has several other alternate titles, including BALEARIC CAPER, OPERATION BALEARIC, and OPERATION GOLD. Whatever name you call it, the movie feels more like a Pink Panther outing than a Bondian spy tale. It has a leisurely pace, with plenty of silly antics, including a Clouseau-like police officer who tries to protect the scepter from being stolen. There's also the exotic location of Ibiza and several beautiful women. There's no gore or overt sexual situations (there are a few murders thrown in). This is the type of script that would have been perfect for Blake Edwards--I'm sure he would have made more out of it than the actual director (Jose Maria Forque) did.

Daniela Bianchi and Harold Sakata are more guest stars here than leading players. Bianchi plays a wealthy woman who wants the scepter because she's obsessed with diamonds. The gorgeous-as-usual Daniela doesn't even make it to the end of the film (I have to admit that after her character was bumped off my interest in the story waned considerably). Sakata is the unlikely administrator of the museum, but at least he has a major part in the climax.

That climax happens to feature a showdown between a vintage car that drives itself (don't ask) and a crate that happens to fly, and has the ability to fire off arrows and explosives. There's so many people after the scepter, and so many fake versions of the scepter, that one gets confused quite easily on what exactly is going on.

I viewed this film on YouTube. It was dubbed in Italian, with English subtitles. The version I saw ran about 90 minutes (IMDB lists the running time as 97 minutes--it didn't seem to me that anything was missing.)

ZARABANDA BING BING isn't terrible...it's competently made and staged, and it's well-photographed. It tries to be a crazy entertaining farce, but the actors (other than Bianchi and Sakata) are not all that interesting. There's plenty of Eurospy films made during the same period as this that have far more notable elements.