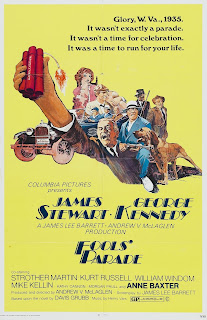 James Stewart is one of my favorite all-time actors, and I've seen nearly all of his films. One I had not seen until last night was FOOL'S PARADE, a 1971 picture produced and directed by Andrew V. McLaglen, who had worked with Stewart a number of times in the 1960s.

FOOL'S PARADE is a strange tale about ex-cons in Depression-era West Virginia. In 1935, Mattie Appleyard (James Stewart) and his two friends Lee (Strother Martin) and young Johnny (Kurt Russell) are released from prison. Mattie, who was convicted for murdering two men, has been locked up for 40 years. But the old man has saved every penny he earned while working at the prison, and he walks out with a check for $25,000. Mattie, Lee, and Johnny intend to use the money to open up a general store, but a vicious and unstable prison guard captain named Doc Council (George Kennedy) conspires with the president of the bank who issued the check to kill the trio and steal the money. Mattie has to use his natural cunning to enable himself and his friends to stay alive.

It's hard to tell exactly what Andrew McLaglen was aiming for with FOOL'S PARADE. He was apparently trying to do something different than the spate of Westerns he had been directing over his career. The story is filled with eccentric characters and eccentric situations--so many that it's hard to relate to anything that is happening. We don't get to know the background of any of the characters, and their quirky mannerisms feel contrived. James Stewart appears to be his typical folksy self as Mattie, but the old guy is a convicted murderer, and he has a glass eye that has a different shape and color than his real eye. Stewart's glass eye device is incredibly distracting, and whenever he is onscreen, the viewer's attention is automatically drawn to it.

George Kennedy gives a very bizarre performance as the ultra-weird Doc Council. The man walks with a limp, totes a shotgun, wears white shoes, has stained teeth, and sports Coke-bottle glasses. Kennedy also uses a off-putting speech pattern. Council is so outlandish that it's hard to take him seriously, but he also violently kills people, contributing to the off-putting aspect of the entire story.

A young Kurt Russell is very good as Johnny, the most normal character in the movie (he reacts to all the goings-on with amazement), while Strother Martin is, well, Strother Martin. In the middle of the story Anne Baxter shows up as a broken-down madam who works out of a houseboat. She slices the ham pretty thick, and the sequence involving her brings the pace to a screeching halt.

FOOL'S PARADE was entirely filmed in West Virginia, and it certainly has a hard-scrabble, rural 1930s look. The movie constantly reminds the viewer that the Depression is going on (as if we didn't know). The real-life locations and down-to-earth look of the production only makes the weirdness of the characters stand out even more.

This was the last theatrical film in which James Stewart received lead billing. FOOL'S PARADE didn't make any impact, and Stewart was disappointed in it. (I doubt that most Jimmy Stewart fans have even heard of this film let alone seen it.) The whole affair is more quirky than entertaining or watchable. I'm surprised the Coen Brothers haven't tried to remake it.