CROSSED SWORDS On Blu-ray From Kino 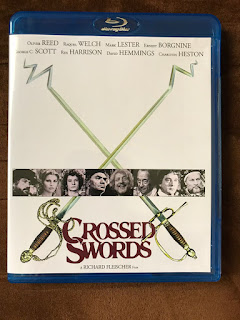 CROSSED SWORDS is a 1977 film adaptation of Mark Twain's story THE PRINCE AND THE PAUPER. The movie was produced by the Salkind family, who were behind such films as the 1970s Three Musketeer series and SUPERMAN: THE MOVIE.

This is a title I had very little knowledge of, and it doesn't seem to have had made much of an impact when it was originally released. But it is a high-class, well-made, entertaining production, with plenty of first rate talents in front of and behind the camera. It deserves to be better known, and Kino Lorber has just released it on Blu-ray.

Set in England at the end of King Henry VIII's reign in the middle 1500s, the story concerns Tom Canty (Mark Lester), a poor teenager who has to steal to live. Tom inadvertently blunders into the royal palace, where he encounters Prince Edward (also Lester), the heir to the throne. The two look exactly alike, and the Prince comes upon the idea of the duo switching identities as a jest. The boys wind up separated, and the Prince, in the guise of Tom, is kicked out of the palace, while Tom is forced to pretend that he is Edward. Out in the streets, Edward finds an ally in a soldier of fortune named Miles Hendon (Oliver Reed). Edward tries to convince Miles, and everyone else he comes into contact with, that he is the rightful heir to the throne, while Tom, stuck in the palace, finds to his dismay that the King has died, and he is being prepared for coronation.

Considering who was behind CROSSED SWORDS, one might assume that the movie is along the lines of THE THREE MUSKETEERS and THE FOUR MUSKETEERS. But CROSSED SWORDS was directed by Richard Fleischer, not Richard Lester. The more overt humorous elements of Lester's Musketeers films are toned down here--Fleischer provides more of a classic Hollywood sensibility. CROSSED SWORDS does have some lighthearted moments, but it has a realistic tone. The sets and costumes are quite impressive, and there's stunning cinematography by Jack Cardiff, backed by a lively music score by Maurice Jarre.

There's a number of great guest stars here, and even though all their roles are relatively small, they still manage to make an impact. Ernest Borgnine plays Tom's cruel father, and Rex Harrison is the witty Duke of Norfolk. George C. Scott is a bandit chief, while Charlton Heston gives a particularly fine turn as the sickly, gout-ridden Henry VIII. The fine character actor Harry Andrews has a role as well, and Hammer Films fans will be pleased to know that Michael Ripper has a small but important part. One supporting player that merits special mention is Lalla Ward as Prince Edward's older sister Elizabeth, the future queen.

The real stars of CROSSED SWORDS are Oliver Reed and Mark Lester. Lester is good in the dual role, but at times he seems overwhelmed by all the luminaries surrounding him. Reed gives what I think is one of the best performances of his film career as Miles Hendon. He totally gives his all in the role, throwing himself about with reckless abandon during the fight scenes. But his Miles isn't just a brawling lout--Reed gives him some unexpected depth. Miles has come back to England after a long absence as a mercenary only to find his conniving brother (played very well by David Hemmings) has taken over his inheritance and married his true love (Raquel Welch). Welch looks spectacular as always, but she really doesn't have all that much to do in the picture.

CROSSED SWORDS looks magnificent on this Kino Region A Blu-ray--it's a colorful, clear transfer that shows off Jack Cardiff's talents. The sound is in mono, and there are times where the music comes off louder than the dialogue.

Among the extras are a new interview with star Mark Lester. He has a number of stories about the production and his co-stars, and, as expected, he has plenty of anecdotes concerning Oliver Reed. An audio commentary prepared for this Blu-ray features Howard S. Berger, Steve Mitchell, and Nathaniel Thompson. The participants are enthusiastic, but they spend a lot of time discussing things other than the movie at hand.

Kino has also seen fit to include what is described as the "international" version of CROSSED SWORDS, which is a few minutes longer, on this disc. Unfortunately this version is not in HD, and the visual quality is nowhere near as good as the main version. There's not a lot of difference in this international version, other than a few scenes being longer and a bit more plot detail.

I was pleasantly surprised at how effective CROSSED SWORDS is, considering that it seems to not have much of a reputation. It's a classic historical adventure that can be watched by the entire family, without CGI excess and outlandish editing techniques. It's a great example of good old-fashioned expert storytelling, enlivened by a distinguished cast. I'm glad that Kino has given an unheralded gem like CROSSED SWORDS a major home video release.