THE PRINCESS COMES ACROSS 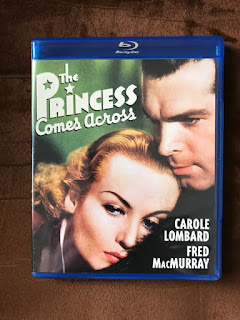 Kino has released the "Carol Lombard Collection II", a Blu-ray set containing three of the great lady's films. As in the first set, released last summer, each movie gets its own disc case. The three films in the set are HANDS ACROSS THE TABLE, LOVE BEFORE BREAKFAST, and THE PRINCESS COMES ACROSS.

I have to start off by saying that all three films in this second collection have been released on home video before (I was hoping we'd get some titles that have never had an official release). But any Lombard product on Blu-ray is a plus. I'll be writing a blog post on all the films in the second set.

We start off with what I consider is one of the most underrated films Lombard starred in--THE PRINCESS COMES ACROSS, a 1936 film made by Paramount and directed by William K. Howard. This is not a wacky screwball farce--it is a lighthearted mystery.

Lombard stars again here with Fred MacMurray, after they appeared in the excellent HANDS ACROSS THE TABLE. Carole plays Brooklyn-born would-be actress Wanda Nash. Wanda is so desperate to get a movie studio contract, she poses as a Swedish royal named "Princess Olga". The "Princess" takes a suite on a luxury liner going from France to New York. There she encounters bandleader (and concertina player) King Mantell (Fred MacMurray). Unsurprisingly, King becomes smitten with "Olga", and he tries to get to know her better, while Wanda, afraid of giving herself away, tries to avoid falling for him. Five internationally famous detectives happen to be traveling on the ship, along with an escaped criminal. The body of a blackmailer winds up in Wanda's suite, and both she and King become suspects. The duo attempt to avoid being charged with murder, and getting murdered themselves.

This is the second of four films that Lombard and MacMurray appeared in together, and they make a great screen team. (MacMurray was one of Carole's best overall leading men.) Lombard is in fine form here, playing the "Princess" as a Greta Garbo type (with a touch of Dietrich thrown in). Other performers would have overdone the Princess bit to the point of absurdity, but Lombard does it in a way that is funny without being cartoonish. Ted Tetzlaff's photography and Travis Banton's costumes make Carole look exquisite (although one has to wonder how an unemployed actress is able to have such a fantastic wardrobe).

MacMurray is very good here--his King is a good guy, but he also has a bit of a shady past. Both stars are given older sidekicks in the picture--Carole is traveling with Alison Skipworth, and Fred's buddy is William Frawley. The two veterans are quite amusing in support.

Some have said that the comedy and mystery elements do not mesh well here together. I happen to disagree. The five inspectors (played by character actors Douglas Dumbrille, Lumsden Hare, Sig Ruman, Mischa Auer, and Tetsu Komai) could have rated a film of their very own. The movie doesn't play the mystery elements as a joke--many of the scenes play out on shadowy deck corridors. When Lombard and MacMurray are in danger, they react like believable human beings.

THE PRINCESS COMES ACROSS isn't on the same level as, say, MY MAN GODFREY, but it's a fun, entertaining movie that showcases Carole Lombard particularly well.

Kino's Blu-ray of THE PRINCESS COMES ACROSS presents a very sharp transfer that shows off the black & white cinematography. The sound is distinct and clear.

The main extra is a new audio commentary by filmmakers Allan Arkush and Daniel Kremer. While listening to them it doesn't take long to realize that they both are hard-core classic Hollywood buffs who know their stuff. The duo enjoy themselves immensely while discussing the cast & crew of the film. There's also some trailers from other Lombard films released by Kino. 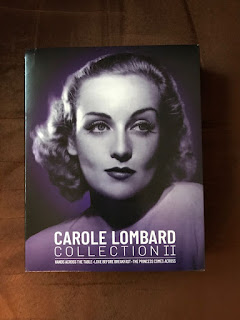