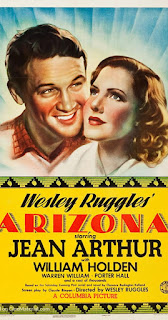 ARIZONA is a 1940 Western, produced by Columbia, and starring one of my favorites, Jean Arthur.

During the Civil War era, a tough, independent-minded woman named Phoebe Titus (Jean Arthur) starts a freight company in the growing community of Tucson. Phoebe is an ambitious woman who goes after what she wants, including a handsome cowboy named Peter Muncie (William Holden). Phoebe eventually convinces Pete to settle down with her and start up a cattle ranch--but the couple must fight off a conniving fellow named Jefferson Carteret (Warren William) who wants to put them out of business.

Jean Arthur had already played Calamity Jane in Cecil B. DeMille's THE PLAINSMAN, and Phoebe Titus is a very similar role. Actually Arthur's appearance in ARIZONA is far more down-to-earth than her Calamity Jane. Despite the appearance of Holden, Arthur is the true star of the film, and her Phoebe is the driving force of the narrative. Phoebe wears the pants (literally and figuratively) in the relationship with Pete, and Arthur's natural spunk fits the character like a glove. The only major Hollywood actress of the period who could have played the role of Phoebe without looking silly would have been Barbara Stanwyck.

This was one of William Holden's earliest films, and he's very young here (believe it or not, Arthur was 18 years older than him). The actor displays none of the world-weary cynicism that would mark his more famous film roles of the 1950s. He's good as Pete, but this is Arthur's movie all the way.

Warren William makes more of an impression than Holden in the role of the main villain. Instead of being over the top, William gives Carteret a snarky, sarcastic air, and makes the fellow a viable threat. The climax sets up a showdown between Carteret and Pete--in reality Phoebe should have been the one to get in a shoot-out with the bad guy (Arthur spends a lot of screen time here toting a shotgun). The supporting cast has plenty of grizzled character actors, such as Porter Hall, Edgar Buchanan, Byron Foulger, and Regis Toomey.

It appears that ARIZONA was meant to be an epic of the Old West. It doesn't have that generic Hollywood Western look--there's a realism to the production design and the costumes, and there's plenty of background detail. (There's also plenty of facial hair among the male members of the cast.) The movie clocks in at a few minutes past two hours, which is a mammoth running time for a 1940 film. There's a Civil War subplot, problems with Native Americans, a cattle drive--I'm surprised that Columbia didn't make this in color, to give it an even more spectacular feel. Director Wesley Ruggles handles all the various elements very well (he had directed the Oscar-winning big-budget Western CIMARRON in 1931).

ARIZONA is a prime showcase for Jean Arthur, and it's another example of a strong independent female leading role during the classic Hollywood period.