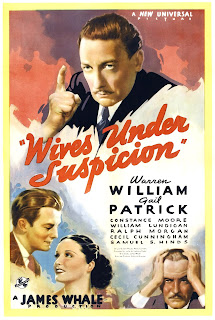 In February I wrote a blog post on Kino's Blu-ray of James Whale's THE KISS BEFORE THE MIRROR. That 1933 film was remade by Whale, and Universal, in 1938 under the title WIVES UNDER SUSPICION, which I saw for the first time last night.

THE KISS BEFORE THE MIRROR is a tale about a defense lawyer, played by Frank Morgan, who is defending a man who killed his younger, beautiful wife in a fit of jealous anger. The lawyer begins to feel that his own younger, beautiful wife is cheating on him, so he begins to believe that if he can get his client off on a charge of temporary insanity, he might be able to dispose of his own spouse the same way.

As I said in my post on it, THE KISS BEFORE THE MIRROR is more of a "Will he do it?" than a whodunit. WIVES UNDER SUSPICION flips the scenario a bit--the lead character is a district attorney who is in charge of prosecuting a man who has killed his cheating wife.

WIVES UNDER SUSPICION stars Warren William as hard-charging D.A. Jim Stowell, a man who takes great pleasure in punishing criminals. He even has an abacus (made up of tiny skulls) on his office desk, so he can keep track of all the people he's sent to the electric chair! Jim's obsession over his rough brand of justice makes his young glamorous wife Lucy (Gail Patrick) uneasy. Stowell is about to take a much-needed vacation with his wife when a meek professor (Ralph Morgan, the brother of Frank Morgan) is brought in after killing his unfaithful spouse. The professor tells Jim about how he was driven to murder when his wife refused a kiss before her vanity mirror--and the D.A. starts to suspect that the same thing will happen between him and Lucy. Jim's suspicions start to affect his mind and manner.

According to James Curtis' fine biography of James Whale, it was the director himself who suggested remaking THE KISS BEFORE THE MIRROR. It says a lot about Whale's position with Universal at the time that he was doing a minor remake of one of his earlier films instead of working on something fresh and inventive. WIVES UNDER SUSPICION runs about 69 minutes, and it feels like a B movie instead of a major A-list production.

THE KISS BEFORE THE MIRROR was a moody, intriguing Pre-Code thriller, set in Vienna, with several impressive visual elements. WIVES UNDER SUSPICION is set in contemporary America, and it doesn't have James Whale's usual quirky touches. There's nothing here to rate it above the dozens of other programmers coming out of the Hollywood studios at the time, and the ending wraps things up way too easily.

The best thing about the film is Warren William's performance. The actor's energetic arrogance is perfect for Jim Stowall, and while the character may be unlikable, he's never unwatchable. Gail Patrick is merely okay as his wife, and while there are plenty of familiar character actors in support (such as Samuel S. Hinds and Milburn Stone), none of them stand out. Way too much footage is given to Lillian Yarbo as the Stowalls' annoying "comedic" African-American maid.

If you didn't know that WIVES UNDER SUSPICION was directed by James Whale, you certainly wouldn't have guessed it. It's hard to believe that the man who made the likes of THE BRIDE OF FRANKENSTEIN and SHOW BOAT could have turned out such an adequate film. It does need to be mentioned that Whale was quite disillusioned by the people who were running Universal at this time. After WIVES UNDER SUSPICION, James Whale had only a few films left in his erratic but sometimes brilliant movie directing career.