HANDS OF THE RIPPER On Blu-ray 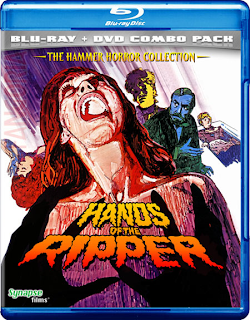 Synapse Films' latest entry in their Hammer Horror Collection is HANDS OF THE RIPPER. This film does not have the major reputation of some of the other Hammer classics, due to the fact that most Americans have probably never seen it.

HANDS OF THE RIPPER was made in 1971, when Hammer Films was undergoing a transitional period. A number of the usual Hammer writers & directors no longer worked regularly for the company, and several new concepts & variations on the typical Gothic thriller theme were being tried out. HANDS is most unusual in that it deals with a female "monster" who isn't really evil in the traditional sense. The casting also is different in that there's no Peter Cushing or Christopher Lee, or even a familiar face like Michael Ripper's. The movie mixes the legend of Jack the Ripper with 19th Century psychoanalysis, and one has to wonder whether audiences of the time where disappointed that it wasn't a more "normal" Hammer movie.

The film has a pretty shocking beginning--a little girl watches as her mother is stabbed to death by her father....who happens to be Jack the Ripper! The story continues years later as the girl (now played by Angharad Rees) is under the care of a conniving phony psychic. After a fake seance attended by a Dr. Pritchard (Eric Porter), a series of events causes Anna to go mad and violently murder the psychic. Pritchard believes Anna may be the killer, but convinces the police to let him take charge of her. Pritchard hopes to use Freudian techniques to find out why Anna kills, and eventually cure her condition. You can probably figure out how that's gonna work.

The script is a bit vague on whether Anna is actually possessed by her father, or just influenced by her childhood trauma. It leaves the choice up to the viewer, which is refreshing for a change.

A lot of people think of Hammer movies as cheesy fun, but HANDS OF THE RIPPER is anything but. The tone is tragic, downbeat, and unsettling. Angharad Rees is not the typical voluptuous Hammer hottie--she's more like a confused child. The idea that she is capable of such monstrous acts makes her more frightening than most of Hammer's supernatural creatures. You can't really call Eric Porter's Dr. Pritchard the story's "hero"--Pritchard knows full well that Anna is dangerous, yet he continues to shelter her and cover up her killings when he has to. His interest in her seems more than just clinical--even though Pritchard is old enough to be Anna's grandfather, he seems almost attracted to her. Another aspect to Pritchard's character is that he appears uneasy around his son's fiancee (played by Jane Merrow), who is blind. Rees and Porter give excellent performances, and they work very well together.

HANDS OF THE RIPPER does feature one big English Gothic cliche: dozens and dozens of prostitutes. Being that this is a "Ripper" picture I guess one shouldn't be surprised. But if you had to learn history from British horror movies, you'd be absolutely convinced that 98% of all women who lived in London between the years 1837 and 1901 were ladies of the evening.

One thing that really stands out about HANDS OF THE RIPPER is the gory murders--every single one of them is a violent FX setpiece. Hammer of course always had a reputation for gore and violence, but HANDS takes it to another level. Because of the explicit killings HANDS was almost never shown on American TV, and most versions of it have been edited in one way or another. Synapse's version runs 85 minutes, and apparently has all the gruesome footage intact. I say apparently because some sources claim that there are still a few gore snippets missing. If you decide not to buy this Blu-ray because of a second or two of footage, then you're crazier than I am.

The picture & sound quality for this Blu-ray is up to Synapse's usual standards. HANDS was made at Pinewood Studios, and because of this it avoids having the somewhat tacky look that most Hammer films from the early 70s have. The production design of HANDS OF THE RIPPER is almost on a level with the Hammer classics of the late 50s and early 60s.

Like the other Synapse Hammer Blu-rays, this one comes loaded with extras. Ballyhoo Productions comes through again with more impressive material. THE DEVIL'S BLOODY PLAYTHING: POSSESSED BY HANDS OF THE RIPPER is a 28-minute documentary concerning the making of the film, with on-screen comments from Hammer experts Richard Klemensen, Wayne Kinsey, Kim Newman, Tim Lucas, and Joe Dante. SLAUGHTER OF INNOCENCE: THE EVOLUTION OF HAMMER GORE is a motion still gallery made up of various shots of gruesome makeups from a number of Hammer movies. Most hardcore Hammer fans will be familiar with most of these stills. There is an audio clip of the specially filmed U.S. TV introduction, which was made to fill in for all the cuts made to the killing scenes, and there is also a HANDS OF THE RIPPER still gallery, the film's U.S. trailer, and some TV spots.

Once again Synapse does a fine job with a lesser-known Hammer chiller. HANDS OF THE RIPPER is worth seeing for fans of the genre, but it's not a creature feature type of monster movie. It's a very good film, and very well made....but because of the story, it's the kind of movie you admire more than you love or enjoy.