THE MENACE WITH FIVE ARMS 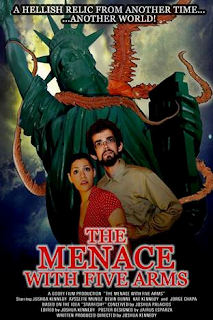 (NOTE: In the interest of full disclosure, I must acknowledge that Josh Kennedy is a Facebook friend of mine, and he asked me to review this film.)


THE MENACE WITH FIVE ARMS can definitely be described as a "personal" project--it was written, produced, and directed by one man, Josh Kennedy. Young Mr. Kennedy also happens to be the composer of the soundtrack, and the film's leading man. His magnum opus is a homage to the 1950s-1960s style of low-budget science-fiction cinema.

After a stentorian-sounding prologue, the story begins in the small town of Santa Mira, located in Vandorf County (did you read that, Hammer fans?). The town's water tower has mysteriously toppled over, and Sheriff Joseph Kerwin (not Curwen) is at a loss to explain it. Soon, various citizens begin disappearing, and the Sheriff joins forces with pretty scientist Dr. Carla Joyce (Ayssette Munoz), who has some theories of her own. These theories involve an ancient creature known as "Starranus Gigantus", and it doesn't take too long to realize that the theory has become fact.

The creature (which is a giant starfish) eventually makes it's way to New York, New York....and there's a climax involving Central Park, a bunch of helicopters, and the Statue of Liberty.

THE MENACE WITH FIVE ARMS is not meant to be a "message" movie. The production's creator is someone who has a great love and respect for classic fantastic cinema. There is an undercurrent of humor in this picture, but it isn't the MYSTERY SCIENCE THEATER type of humor. You laugh with the movie, not at it. There's no sense of "Hey, isn't this stupid?" The tone is affectionate instead of snarky. This movie wants you to like it, instead of feeling superior to it.

What helps is that Josh Kennedy has a encyclopedic knowledge of the genre he's working in. Kennedy's Sheriff Joe is obviously the John Agar/Grant Williams type (but a bit more articulate). Ayssette Munoz's attractive & intelligent Dr. Joyce is the equivalent to a Mara Corday or a Faith Domergue. There are a ton of references to other classic films--THE CREATURE FROM THE BLACK LAGOON, JAWS, THE BEAST FROM 20,000 FATHOMS, KING KONG, various Hitchcock titles....and there's even a Peter Cushing dialogue quote. But these are always within the framework of the story--they don't hit you upside the head with their "cleverness".

MENACE is in black & white, and it feels like an early 50s sci-fi flick from Universal. There's no shaky camera work, or music video style editing. (Thank God the director knows how to use a tripod.) There obviously isn't much of budget, but one marvels at the creativity which came out of this situation. A perfect example is the big New York climax, in which Kennedy took a real life incident and incorporated it into his story.

THE MENACE WITH FIVE ARMS is about 90 minutes long. There are some early character-defining scenes that may drag a little, but this isn't a major concern. Ironically the same night I watched MENACE I later saw Svengoolie present THE BEGINNING OF THE END, which has some similarities. I have to honestly say that Josh Kennedy did a better job than Bert I. Gordon did.

I have to admit that I am biased concerning this project. It's just refreshing to see a young person who has such a love and enthusiasm for the horror and science-fiction genre. Josh Kennedy is obviously very talented, and I have a feeling we'll be hearing from him in the future.

If you would like to have more information on THE MENACE WITH FIVE ARMS, and how you can see it, you can contact Josh Kennedy at joshkat1964@yahoo.com.


Here's a link for a THE MENACE WITH FIVE ARMS trailer: http://youtube.com/watch?v=lwq8Mq-_InQ.