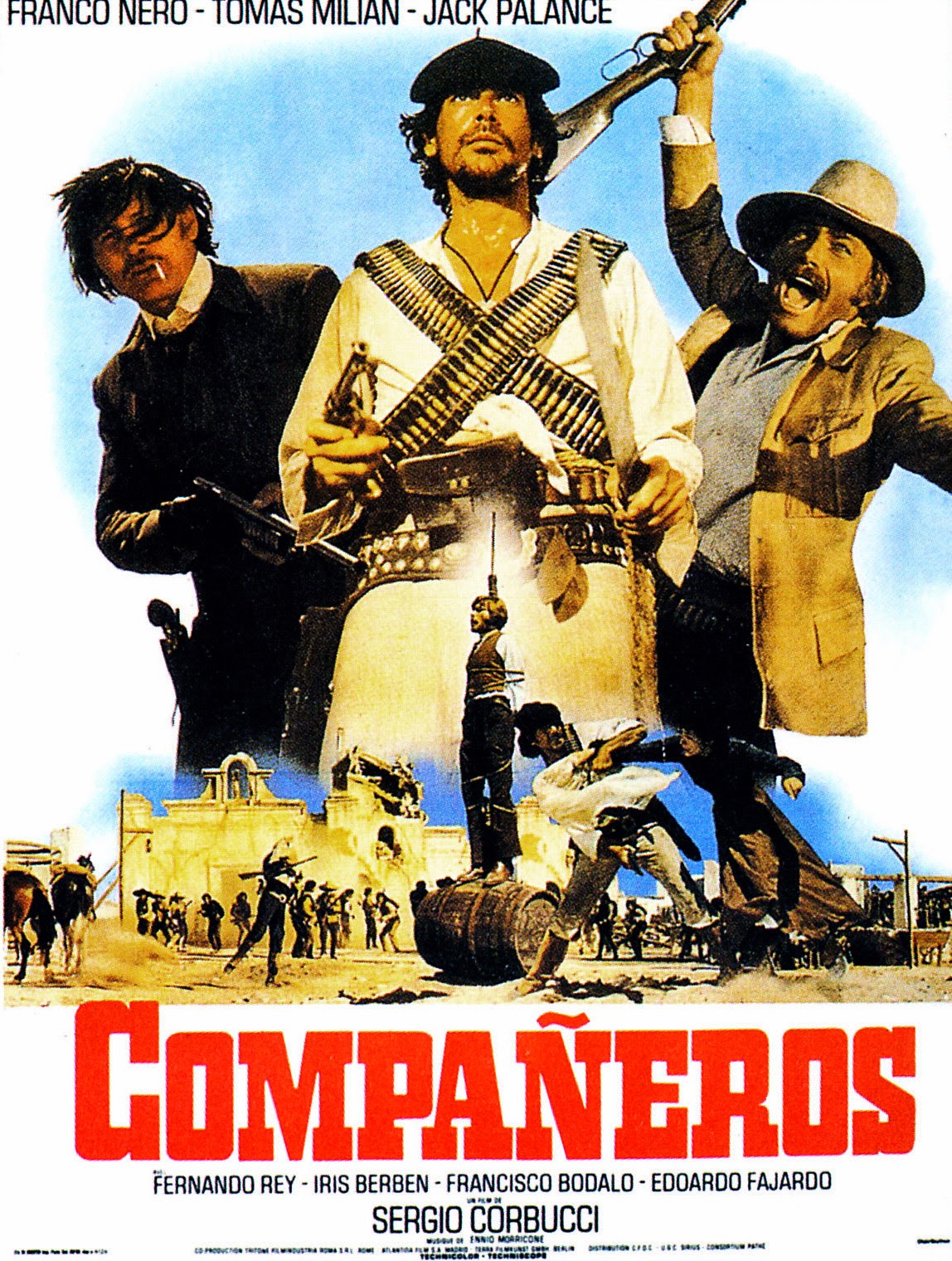 One of my latest Blu-ray purchases is a 1970 Spaghetti Western called COMPANEROS, released by Blue Underground.

COMPANEROS was directed by Sergio Corbucci, who helmed a number of famous European Westerns, including DJANGO and THE GREAT SILENCE. The movie stars Franco Nero, who was the original Django, and Tomas Milian (THE BIG GUNDOWN).

Nero and Milian were two of the biggest stars of the whole Spaghetti Western genre, and teaming them up was a major coup at the time. Usually when there are two male stars in a Spaghetti Western, one is a taciturn Clint Eastwood-type, and the other is a colorful Mexican bandit. Milian fills the Mexican bandit role, but Nero's character--a Swedish arms dealer--is made out to be as "colorful" as Milian. Most of the plot deals with Nero and Milian double-crossing and double-dealing each other as they try to find a Mexican professor (Fernando Rey) who knows the combination to a safe held by revolutionaries.

Sergio Corbucci's Westerns have been considered to be political, but if COMPANEROS does have a message, it is lost among the antics of Nero and Milian. Fernando Rey's character is portrayed as a true voice of political protest--he doesn't even believe in violence (how long do you think a guy like that is going to last in a Spaghetti Western?). The beliefs of Rey's professor do not mix very well with the rest of the film, which is filled with the typical violence and goofy humor associated with this kind of feature.

The main villain of COMPANEROS is none other than Jack Palance, who plays a mercenary named John who has a grudge against Nero's gun runner. In just about every scene that John is in, he's puffing on a marijuana joint...and one has to wonder if Palance really was smoking the wacky weed. He spends the entire movie looking and talking like he's constipated, and he seems to be using some type of Irish-Scottish accent that changes tone every time he opens his mouth. His character also has a wooden hand and a falcon. One of the major archetypes of most Spaghetti Westerns is having a villain that is bizarre as possible, but Palance is so over-the-top that he's just distracting instead of dangerous.

Sergio Corbucci did know how to direct effective action sequences, and COMPANEROS is filled with them. Even if the story doesn't make much sense, a viewer won't have to wait long for something violent to happen. COMPANEROS is entertaining, at least for European Western fans. Nero and Milian do have excellent screen presence, and they make a very good team. The Blue Underground Blu-ray of this title contains two versions of the film--an English version which runs 115 minutes and a Italian version which runs 119 minutes (there's not much difference between the two). COMPANEROS is a bit long at almost two hours--it is certainly not on the level of a Sergio Leone-type epic.

One major treat COMPANEROS has is a music score by the iconic Ennio Morricone. I love Morricone's work, but even I have to admit that his score for this film is not one of his best. The main title theme, which is a sarcastic up-tempo song about killing, is played so many times during the story that you get a bit annoyed by it after awhile. But average Morricone is better than most other composer's best.

The Blu-ray contains a short featurette containing interviews with Franco Nero, Tomas Milian, and Ennio Morricone. This extra really should have been longer (Morricone has very little time in it). There is a rather rambling audio commentary from Western experts C. Courtney Joyner and Henry Parke, and a selection of trailers, TV commercials, and a still & poster gallery.
Posted by Dan Day, Jr. at 11:30 AM