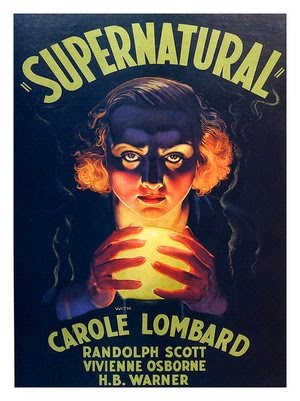 If you've been reading my blog posts over the last couple years, you'll know that I've been doing a fair amount of whining and moaning about Universal's home video release selections. The company owns a great number of features that still haven't seen any type of official DVD or Blu-ray release.....but at the same time they keep re-releasing product that the average movie buff has probably bought about two or three times already.

Like most entertainment conglomerates these days, Universal has their own DVD-R line. Under this line they have recently put out a group of features that collectors have been asking for. Among the group are a few obscure Universal thrillers that I've never seen....but the movie I had to buy right away was SUPERNATURAL, starring my favorite actress, Carole Lombard.

SUPERNATURAL, made in 1933, was actually produced by Paramount (Universal owns the rights to most of the 1930s Paramount films). The movie was directed by Victor Halperin and produced by Edward Halperin, the men behind WHITE ZOMBIE. The success of the low-budget Bela Lugosi chiller enabled the Halperin Brothers to move up to the big time at Paramount.

Dr. Houston is a friend of rich heiress Roma Courtney (Carole Lombard). Roma is devastated by her twin brother's recent death. In one of those incredible movie coincidences, Roma is being targeted for a scam by a shady spiritualist (Allan Dineheart), who happens to be Ruth Rogen's former boyfriend.

Roma and her boyfriend (Randolph Scott) consent to go to a seance held by the con artist, where Roma is convinced she has made contact with her late brother. After the seance, Roma goes to Dr. Houston for advice....only to interrupt him just at the moment he is experimenting with Ruth Rogen's body. Roma faints, and Houston believes that Ruth was somehow trying to take control of her. Houston thinks Ruth failed, but at another seance the spirit of Ruth shows up again--and claims Roma....

SUPERNATURAL is nowhere near the level of WHITE ZOMBIE, but it does have some good moments. The Halperins re-used cinematographer Arthur Martinelli, who had worked on WHITE ZOMBIE, and Martinelli keeps the camera almost constantly moving--at a level unusual for a 1933 picture. Being a contemporary story, SUPERNATURAL doesn't have the true chiller atmosphere of similar films. Victor Halperin tries hard, but he also tries to have it both ways--he wants the audience to buy into the "soul" going on and affecting the living, while at the same time having a major character who is a phony psychic (and showing the tricks behind his trade).

The real reason to watch SUPERNATURAL is of course Carole Lombard. This was made before her breakthrough role in TWENTIETH CENTURY. At this point in her career she was placed in a string of underwhelming roles (even though she did have some good parts in VIRTUE and NO MAN OF HER OWN). SUPERNATURAL does give her a chance at a sort of "dual" character, even though Roma doesn't come under the spell of Ruth Rogen until the very end of a 64-minute picture. Subtle makeup and lighting help Roma "become" Ruth. Seeing Carole act like a sexy murderess is certainly unique. Lombard does a very good job, under the circumstances (she even gets some giant Lugosi-like close-ups of her eyes during her "evil" state).

Apparently Carole was not too happy during the making of SUPERNATURAL. There's a story attributed to Sidney Salkow, who was the dialogue director on the film, which says that after an earthquake hit in nearby Long Beach during filming, Carole walked over to a cowering Halperin while the set was still shaking and said, "Victor....THAT was only a warning!!" Carole Lombard had a reputation for being loved by her co-stars and co-workers, and she wasn't known as a diva....so whatever happened between her and Victor Halperin must have been really bad....or maybe Carole was just tired of the roles given to her by Paramount at this time.

Randolph Scott is okay in the "David Manners" role, and Allan Dineheart is particularly slimy as the con artist. Vivienne Osborne doesn't have much screen time as Ruth Rogen, but she makes the biggest impression. A great movie could have been made about Ruth Rogen's life before SUPERNATURAL (but it could only have been made during the Pre-Code era).

The quality of the SUPERNATURAL DVD-R is okay....the picture and sound is fine. This DVD-R has no extras....heck, it doesn't even have a menu--when you put the disc in, it automatically starts playing the movie. It's nice that SUPERNATURAL is finally officially available...but I wish it had come out as part of a new Carole Lombard box set (there's still plenty of Lombard features that Universal controls that have not been put out on DVD).
Posted by Dan Day, Jr. at 1:21 PM