PLANET OF THE VAMPIRES On Blu-ray 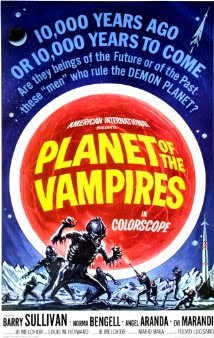 One of the most highly anticipated Blu-rays of 2014 has just been released--Mario Bava's Gothic science-fiction extravaganza, PLANET OF THE VAMPIRES, from Kino Lorber.

Two spaceships land on a distant planet in response to a mysterious distress signal. Various crew members wind up being taken over by a strange intelligence, and the distant planet turns into a house of horrors. This sounds like the usual low-budget sci-fi flick, but legendary director Mario Bava's style and panache turn it into one of the best fantasy films of the 1960s.

Despite not having a major budget, PLANET OF THE VAMPIRES has more atmosphere than most CGI epics of the 21st Century. Mario Bava uses color, lighting and practical FX to turn the planet into a phantasmagorical dreamscape. Even the fog effects in this movie seem perfectly composed. Without Bava at the helm, and without his bag of cinema tricks, PLANET OF THE VAMPIRES would scarcely rate any type of notice today.

The best part of PLANET OF THE VAMPIRES is the discovery of an ancient spacecraft on the planet's surface, containing giant misshapen skeletons and strange technology. This sequence is about as Lovecraftian as you can get without anything being actually based on Lovecraft. (It makes me wonder what Bava could have done with a Lovecraft story like "At the Mountains of Madness".) When the ancient ship's recorder is accidentally played, the sound effect is memorably eerie--it ranks right up there with the "Wilhelm Scream" and the creaking old mill in WHITE ZOMBIE.

Another highlight of this film is the design of the spacesuits used by the stranded crews. Black leather with yellow piping, they're like nothing seen before in a science-fiction film, and they give PLANET OF THE VAMPIRES another reason to stand out among the monster movie pack. 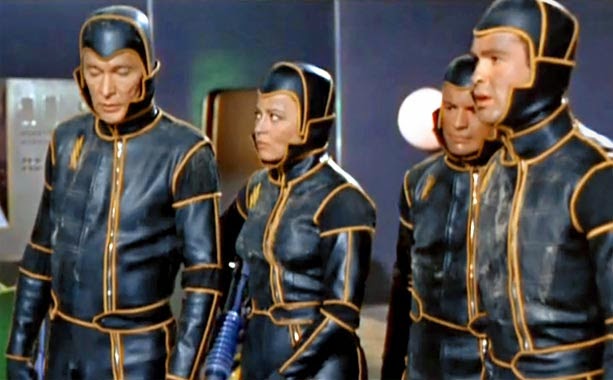 PLANET OF THE VAMPIRES had been released on DVD in the early 2000s as part of MGM's "Midnite Movies" line. This Blu-ray from Kino is a huge improvement picture wise. Bava's colorful compositions stand out even more now--I felt like I was watching the movie for the very first time. If you already have the DVD, you should buy the new Blu-ray just for the visual improvement alone.

But there's more here than just a great looking film. Kino provides some great extras, including two "Trailers From Hell" entries featuring PLANET OF THE VAMPIRES, an extensive still gallery (with a ultra-rare color photo of star Barry Sullivan in costume and Mario Bava), and the text of the original story that PLANET OF THE VAMPIRES was based on, "One Night of 21 Hours".

The biggest extra of them all is a brand new audio commentary from Mario Bava expert (and VIDEO WATCHDOG editor) Tim Lucas. Lucas does excellent work when it comes to commentaries, and this one is no exception. Lucas tells you just about everything you need to know about PLANET OF THE VAMPIRES, including the numerous effects that Bava employed to create the picture.