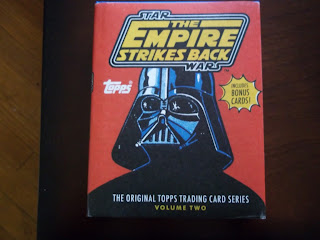 Abrams Comicarts has released a sequel to their highly popular book on the Topps STAR WARS trading cards. Naturally, this volume deals with the cards Topps produced for THE EMPIRE STRIKES BACK.

The Topps EMPIRE set was actually bigger that the set for STAR WARS (I honestly didn't realize this). The EMPIRE set consisted of three different series of cards--Series One and Series Two had a total of 132 cards each, and Series Three had 88 cards, for a grand total of 352. (The STAR WARS set had five series of 66 cards for a final total of 330.) All 352 individual cards--and their backs--are reproduced in this book, along with the 88 stickers included in the set. A set of 30 photocards produced by Topps for EMPIRE is reprinted as well.

Gary Gerani, who worked on both the STAR WARS and EMPIRE sets for Topps, provides a behind-the-scenes look on how the cards were put together. Gerani discloses that Topps wanted to make an even better set than the mega-selling STAR WARS one, and that the company was determined to use better and more diverse photos this time around. Going through this book I have to say that technically the EMPIRE cards really are better....the pictures are sharper and clearer, and there is a far greater selection of them. The EMPIRE cards feature a silver-like metallic border (in the third series the metallic border was gold-colored) that went well with the movie's cold, darker tone. Gerani reveals that he, and his Topps co-workers, did not find out about Darth Vader being Luke's father until seeing EMPIRE on the big screen--so the plot summaries on the back of the Series One cards were not able to give out the big secret.

Just like the first Topps STAR WARS trading card book, this one has a cover which is made to feel just like a trading card wax pack wrapper (an absolutely fantastic idea, in my opinion). The EMPIRE book also comes with four actual reprinted EMPIRE trading cards. This volume also has pictures of all the wax packs and boxes in which the EMPIRE cards were sold in.

I'm highly certain that this book will be just as popular as the STAR WARS trading card book. Buying this volume will be a lot less cheaper than trying to get an actual entire EMPIRE card set (and you won't have to worry about any cards getting damaged, either). Seeing all the Topps EMPIRE cards took me back to the Summer of 1980, and made me want to watch the movie yet again. I can't give out a more worthy compliment than that. Abrams Comicarts and Topps have a fantastic idea with this series of books, and I've already ordered the upcoming RETURN OF THE JEDI trading card book, due to come out this summer.