What Was The Greatest Peter Cushing/Christopher Lee Movie? (Part One) 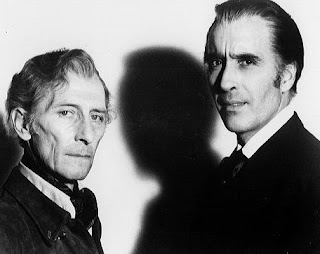 I decided this year to do a series of posts on what was the greatest Peter Cushing/Christopher Lee movie of all time. The answer to that is more complicated than it would appear. Cushing and Lee were officially in 22 feature films together....but in many of them, the duo never even shared a scene. The two actors are so inextricably linked that one assumes that they spent hours and hours of screen time dealing with one another in some way--the reality is that in most of their pairings they barely got to exchange dialogue. The continuing legend of the on-and-off screen Cushing & Lee partnership has far overshadowed what actually transpired on film.

What really links Peter Cushing & Christopher Lee together is the genre of fantastic film. The Cushing & Lee screen team is very different from other classic movie teams such as William Powell & Myrna Loy, or Kirk Douglas & Burt Lancaster. Cushing & Lee spent an inordinate amount of time trying to kill one another on screen. (Is there any other famous screen duo you can say that about? Karloff & Lugosi?) Many times Cushing & Lee were cast in a film simply because their names would give a certain horror film a special cache. Other great movie duos such as Fred Astaire & Ginger Rogers had entire films produced and developed to showcase their personas. When it comes to Cushing & Lee, most of the films they made together fall short in making the most of their unique talents. I can't tell you how many times I've watched a Cushing/Lee movie and thought to myself: "If only the script had went this way..."

What Cushing & Lee were able to accomplish was to create iconic characters in a genre that many actors find difficult to perform in. Both men now have huge fan bases which seem to continue to grow year by year. Many have said that Cushing & Lee wasted their talents making so many low-budget fantastic films, but the fact is that the duo are more popular now than ever, and many of their acting contemporaries who starred in supposedly more "distinguished" work are all but forgotten today.

When it comes to the Cushing & Lee movies, how exactly does one define "best"? Is it the best movie that Cushing & Lee happened to have appeared in, or the movie that best showcases them together on-screen? For example, let's take a look at the first two films that featured appearances by Cushing & Lee. In Olivier's 1948 film version of HAMLET, Peter Cushing played the role of Osric, while Lee, who happened to be working on another film in the same studio, sneaked onto the set as an extra. HAMLET went on to win the Best Picture Oscar, and it is considered one of the greatest film adaptations of Shakespeare's works. So shouldn't this be the "greatest" Cushing/Lee movie?

The second film that Cushing & Lee both made appearances in was John Huston's 1952 version of MOULIN ROGUE. Cushing & Lee have so little screen time here it's easy to miss them if you are not paying close attention--but MOULIN ROGUE is a critically acclaimed film, so shouldn't this also be looked upon as a "great" Cushing & Lee movie?

For me a true Cushing & Lee movie is one that has the duo actually interact with one another, or at least one that gives both men major roles. For the purposes of this series of posts, I'm going to go through all of the other official Cushing/Lee movies (in the order of production) and examine what relationship, and what interaction, their characters have with one another in each outing. The only Peter Cushing/Christopher Lee movie I have not seen is ARABIAN ADVENTURE, a title in which the duo share no scenes together.

THE CURSE OF FRANKENSTEIN
The very first "real" Peter Cushing/Christopher Lee movie, the very first Hammer Films color Gothic shocker, the first Frankenstein film made in color, etc. Anyone with any basic knowledge of classic films knows that THE CURSE OF FRANKENSTEIN is one of the most important and influential horror films ever made. It's rather fitting that in the very first scene in which Cushing & Lee actually interact with one another, Lee is trying to strangle Cushing to death. Cushing's Baron Frankenstein creates Lee's pathetic creature, and, as in most of the other Hammer Frankenstein outings, he's also responsible for the destruction of his handiwork. This is Cushing's show all the way, but many forget how good Lee is here. Yes, his makeup is nowhere near the legendary status of the Universal Frankenstein's monster, but in a way that helps Lee's performance. Lee portrays the Monster as a shambling, confused misfit, a being with nothing but pure animal tendencies. THE CURSE OF FRANKENSTEIN has its detractors, but it can be said that it is the most important Cushing & Lee movie.

HORROR OF DRACULA
The ultimate Cushing & Lee movie? Well, I consider Van Helsing to be Peter Cushing's greatest role, and I consider Dracula to be Christopher Lee's greatest role. When the average person thinks of Cushing & Lee, they usually imagine them as Van Helsing and Dracula in a battle to the death. The duo do not get to face off against each other until the very end of the film....but since that ending is one of the greatest in movie history, that's more than enough.

THE HOUND OF THE BASKERVILLES
This is the very first movie in which Cushing & Lee exchange dialogue! Peter gives one of his best performances as Conan Doyle's immortal detective Sherlock Holmes, while Christopher gets to play a "normal" person for a change. Lee is never given enough credit for his acting range, and he fills the role of Sir Henry Baskerville very nicely. (Let me run this one by you--could you imagine Bela Lugosi playing Sir Henry??) Despite the fact that Cushing & Lee here are both "good" guys, their on-screen relationship is still a bit mixed--Cushing's Holmes certainly doesn't want any harm to come to Sir Henry, but he also sees him as nothing more than the main factor of a mystery that needs to be solved.

THE MUMMY
Once again Cushing & Lee spend a lot of time trying to kill one another. At least here Lee gets a large flashback which explains his motivation, and he gets extra points over Cushing by being the most impressive--and dangerous--mummy ever put on the big screen.

THE GORGON (aka Joshua Kennedy's favorite film of all time)
Despite the success of their late-50s Hammer horrors, it wouldn't be until 1963 that Cushing, Lee, and director Terence Fisher would reunite at Hammer for another Gothic tale. THE GORGON is looked upon as the movie where Cushing & Lee supposedly play the "other one's" typical role--Cushing is a man who is cold, angry, and repressed, while Lee plays a quirky Professor who solves the supernatural mystery. The duo have only one real important scene together, and, as usual, they look like they want to tear each other apart. Probably the most unique of the Cushing/Lee match-ups.

DR. TERROR'S HOUSE OF HORRORS
The very first anthology film of terror tales from Amicus productions, a company that would have a major impact on the acting careers of Cushing & Lee. Both men have great roles here (and once again Lee has not seem to have gotten as much credit for his portrayal as Cushing has). I'm sure Freddie Francis had Cushing & Lee sit next to each other in the train compartment on purpose. Lee's snobby art critic regards Cushing's strange fortune teller with disdain--much to his later regret.

SHE
This is Hammer's attempt at a large-scale action-adventure epic, based on H. Rider Haggard's famous novel. Cushing & Lee are really nothing more than guest stars here, but their performances are so solid that one wishes they had far more screen time (I could say that about every Cushing & Lee movie). As in THE GORGON, they only have one real important scene together, but it does a lot to explain the character of Lee's High Priest.

THE SKULL
This is the first Cushing/Lee movie where the two men's characters know each other at the beginning of the film, and the first where the two are friends! (That still doesn't stop Cushing from killing Lee during the story.) One of the most underrated of the Cushing & Lee team-ups, with excellent camera work from director Freddie Francis and cinematographer John Wilcox. Still, this is more of a Cushing movie than a Lee one.

Tomorrow we'll look at the remaining Cushing/Lee films--and we'll find out that the duo had far more screen time, and far better roles--in the 1970s than they did in their more famous Hammer outings.
Posted by Dan Day, Jr. at 1:51 PM