What Was The Greatest Peter Cushing/Christopher Lee Movie? (Part Three) 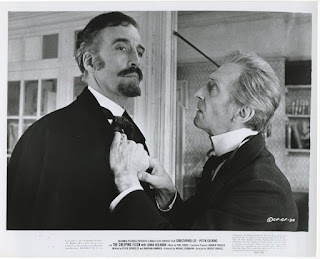 This is the conclusion of a series of posts concerning the films starring Peter Cushing & Christopher Lee.

What was the greatest Peter Cushing/Christopher Lee movie? Once again, we have to qualify that question by asking another one--is the best Cushing/Lee movie the greatest one that they just happened to have been in, or the one that best exemplifies the talents of both men?

One would assume that the best Cushing/Lee movie has to be one that was produced by Hammer Films. The duo appeared together in eight films for Hammer:

THE CURSE OF FRANKENSTEIN
HORROR OF DRACULA
THE HOUND OF THE BASKERVILLES
THE MUMMY
THE GORGON
SHE
DRACULA A.D. 1972
THE SATANIC RITES OF DRACULA

What's interesting about the Hammer Cushing & Lee films is that in most of them the two are basically trying to kill each other. In THE GORGON and SHE, they did not engage in mortal combat, even though their characters probably would have liked to. THE HOUND OF THE BASKERVILLES is the only Hammer Cushing/Lee film in which the duo do not play bitter enemies, although it has to be said the relationship between Sherlock Holmes and Henry Baskerville is not a warm one.

It is the Cushing/Lee films of the 1970s--the ones that are usually not considered on the same level as the Hammers--which give the two actors more screen time with each other, and more diverse roles. Cushing & Lee play friends (or at least acquaintances) in I, MONSTER, HORROR EXPRESS, and NOTHING BUT THE NIGHT. They also get a major amount of screen time together in 1972's THE CREEPING FLESH. The Hammer films Cushing & Lee starred in made them icons, but their 1970s work gave them the opportunity to work as an actual team.

Other Cushing & Lee films that deserve to be at the top of the list include THE CURSE OF FRANKENSTEIN and THE MUMMY. CURSE should get a fair amount of credit for being the first "real" Cushing & Lee movie, while every time I see THE MUMMY I like it more and more (especially after seeing the magnificent looking Blu-ray of it released last year by Warner Home Video). On some of the Facebook comments for this series of posts, a few mentioned THE HOUND OF THE BASKERVILLES as the best Cushing/Lee outing.

HORROR EXPRESS has to be mentioned as one of the best Cushing & Lee films--and many would venture that it is the best overall. HORROR EXPRESS features the duo as a real team--working together and fighting the "bad guys" side-by-side. HORROR EXPRESS delightfully takes advantage of the presumed on (and off) screen personas of the two men--Lee as Prof. Saxton is austere and a bit snobbish, while Cushing's Dr. Wells is warm and eccentric. Cushing and Lee play off of each other wonderfully here--one imagines that they worked out all sorts of acting and dialogue business among themselves before they went in front of the cameras. It's ironic that a low-budget Spanish production that had one of the most implausible scripts the duo ever worked on gave Cushing & Lee the ability to do things together as actors that they had never been able to do before (or later on). It's always exciting and dynamic to see Cushing & Lee in one of their many titanic clashes--but the many fans of both men simply adore the fact that HORROR EXPRESS has them as compatriots, since it is well established that Cushing & Lee were great friends in real life. (And of course HORROR EXPRESS has the greatest Cushing & Lee line of dialogue of all time: "Monster!? We're British you know!")

I would also include THE CREEPING FLESH as one of the best Cushing & Lee pairings. It's not a "fun" monster flick--it's more of a dark tale concerning repression and family secrets--and that may be why it is not as popular as some of the other Cushing/Lee match-ups. But it is very good as an overall film, and as a showcase for Cushing & Lee.

When it comes to most of the other Cushing/Lee films....once again writing this series of posts has reminded me how little screen time the two of them actually shared. The two men were very rarely used to the best of their abilities, and that's a shame. I would even go so far to say that the greatest Peter Cushing/Christopher Lee movie may not have ever been made--maybe it was in some alternate universe. Maybe somewhere there's a Doctor Who movie with Peter as the Doctor and Christopher as the Master...or an adaptation of a Lovecraft story starring the duo...or a World War II tale starring the men as British military officers...or maybe even someone actually made an idea of mine: GODZILLA VS. ENGLAND (my contribution to an Imaginary Film Blogathon, starring Cushing & Lee, of course).

In my opinion the greatest Cushing/Lee film overall is HORROR OF DRACULA, and the greatest Cushing/Lee team-up is HORROR EXPRESS. But really anytime we get to see these men in the same scene, no matter what the movie, is a great moment. It's a credit to both men that there doesn't seem to be a group of "Cushing only" fans or "Lee only" fans. There's definitely a "Karloff" group of fans and a "Lugosi" group...and the admirers of each have no problems sniping at the other group's hero. I've never heard of any Cushing fans dissing Lee or vice-versa. Peter Cushing and Christopher Lee will forever be linked together--and I'm sure both men would fell proud of that.

By the way....if you need to get just one book about Peter Cushing and Christopher Lee, I highly recommend Mark A. Miller's CHRISTOPHER LEE AND PETER CUSHING AND HORROR CINEMA: A FILMOGRAPHY OF THEIR 22 COLLABORATIONS from McFarland Publishers. It was an invaluable resource in the writing of this series of posts.

And since we're on the subject of Peter Cushing and Christopher Lee, let's give proper credit to Ted Newsom, who brought together Cushing & Lee to narrate the documentary FLESH AND BLOOD: THE HAMMER HERITAGE OF HORROR, in 1994. It would be the very last time Cushing & Lee would get to spend time with each other--Cushing would pass away later that summer.
Posted by Dan Day, Jr. at 3:54 PM