What Was The Greatest Peter Cushing/Christopher Lee Movie? (Part Two) 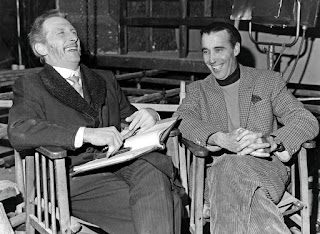 Today I continue my examination of the films in which Peter Cushing and Christopher Lee appeared. We start out with.....

ISLAND OF THE BURNING DAMNED (aka NIGHT OF THE BIG HEAT)
Cushing, Lee, and director Terence Fisher are reunited in this underwhelming science-fiction tale. Like most British sci-fi flicks of the 1950s and 60s, most of the action takes place in a pub! Cushing and Lee are both "good guys" here, but they really have very little interaction with one another. Another one of their parings that does not make the most of their talents.

SCREAM AND SCREAM AGAIN
This Amicus/AIP co-production is a very good science-fiction/political conspiracy thriller, but it is now most remembered for having Vincent Price, Lee, and Cushing in the cast...and wasting that prime opportunity. Price has more of a supporting role, while Lee gets less than that, and poor Cushing is in it for about a minute before he's killed off. The three titans of terror do not all appear on-screen together at one time (Price and Lee do share some scenes at the end, but it's not enough). Why you would put these three men in the same film and not use them properly is a question that monster fans have been asking for years. I know this sounds like heresy, but maybe SCREAM AND SCREAM AGAIN would have been better served if the Terrific Trio were not in it.

ONE MORE TIME
Cushing and Lee do cameos as Baron Frankenstein and Count Dracula in this "comedy" directed by Jerry Lewis and starring Sammy Davis Jr. and Peter Lawford. The bit isn't much--you can watch it on YouTube (trust me, you don't need to sit through the entire film--unfortunately I have). Even the cameo doesn't do them justice--Cushing and Lee are at the back of the shot, and they're barely in focus.

THE HOUSE THAT DRIPPED BLOOD
Another anthology tale from Amicus. Cushing and Lee star in separate stories of their own, and do not share any scenes. This is one of Amicus' best films, and Cushing and Lee both get a chance to shine--although I have to say my favorite tale in this movie is the final one with Jon Pertwee and Ingrid Pitt.

I, MONSTER
This is another version of Stevenson's The Strange Case od Dr. Jekyll and Mr. Hyde, with Christopher Lee playing "Dr. Marlowe" and "Mr. Blake". This is one of Lee's best performances, and he (and the movie) doesn't get enough credit. Cushing plays Marlowe's friend Utterson...but, as usual, the duo wind up in a fight to the death at the climax.

DRACULA A.D. 1972
Hammer Films reunited Lee & Cushing in their most iconic roles as Dracula and Van Helsing (or more accurately, a direct descendant of Dr. Van Helsing) in this modern day variation on the classic vampire story. Fans of the famous acting duo get the treat of watching two different battles between them--one at the beginning and one at the end. I have a personal fondness for this movie--there's something endearingly goofy about it, and there's nothing better than seeing Cushing/Van Helsing and Lee/Dracula square off.

HORROR EXPRESS
Due to its long-time public domain status, this may be one of the most well-known (and enjoyed) Cushing & Lee movies ever. The two are rival scientists, stuck aboard a train speeding through Russia, and dealing with a frozen "missing link" that happens to contain the essence of an alien creature. This is really the first film in which Cushing & Lee work together all the way through--this time they actually are a team. For all those that have complained that the duo were wasted in most of their features, HORROR EXPRESS is like a Christmas present. One can only imagine if there had been other movies made based on the continuing adventures of Professor Saxton and Dr. Wells. I will discuss this movie in further detail in Part Three of this series of posts.

THE CREEPING FLESH
An excellent film directed by Freddie Francis, THE CREEPING FLESH has Cushing & Lee as rival scientists again, but this time they are half-brothers, and they are certainly not working together. Cushing is trying to cure "evil" in humanity for all time, but he backfires badly--due in part to the machinations of his coldly jealous brother Lee. The duo get far more to do here, acting wise, than in most of their more famous pairings.

NOTHING BUT THE NIGHT
This film was made by Christopher Lee's short-lived production company. It's a valiant effort, but this tale about wealthy elders trying to inhabit the minds of young children would have been more effective as an hour long X-FILES episode (just think of Lee's character as Mulder and Cushing's character as Scully). Cushing & Lee get to be on the same side again, and they once again play friends, even though they don't get to show too much warmth for each other (at one point Cushing even yells at Lee). Not the best movie in the world, but a great chance to see the duo as contemporary "normal" characters.

THE SATANIC RITES OF DRACULA
The last Hammer film to feature Cushing & Lee, and their last go-round as Van Helsing and Dracula. The movie is a direct sequel to DRACULA A.D. 1972, and in my opinion not as good--it has a very nasty feel to it, with sacrifices to the Devil and plague viruses. We do get to see one scene where Lee's Dracula, in disguise as a Howard Hughes-like tycoon, confronts Van Helsing. Lee uses a Bela Lugosi accent, and this scene Dracula and Van Helsing exchange more dialogue than all their other Hammer appearances put together! This is also the last film in which Cushing & Lee engage in a match to the death.

ARABIAN ADVENTURE
As I stated in my last post, this is the only Cushing/Lee movie I have never seen. From what I do know about it, I don't think I have missed much. I am aware that the duo do not share any scenes in it--apparently Cushing has little more than a cameo.

HOUSE OF THE LONG SHADOWS
This was Cannon Films' attempt to make an "old-fashioned" chiller. Old fashioned is right--this movie looks tame compared to the movies Cushing & Lee made twenty years before. Not only do we get Cushing & Lee, we also get Vincent Price and John Carradine--and we also get to see more of Desi Arnaz Jr. than we do any of the Gruesome Foursome. What really gets me about this one is the fact that even though Cushing & Lee are in several scenes together, they have almost no interaction whatsoever. The last Cushing/Lee movie is like a lot of the others--a wasted opportunity.

Now that we have come to the end, it's time to decide what is the greatest Peter Cushing/ Christopher Lee movie of them all. I'll state my conclusions in Part Three of this series.
Posted by Dan Day, Jr. at 2:00 PM