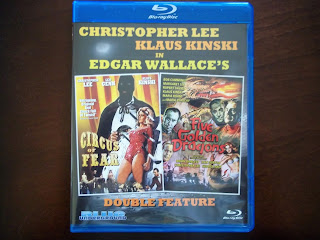 Blue Underground continues to mine the nuggets of bizarre cinema with their Blu-ray release of CIRCUS OF FEAR and FIVE GOLDEN DRAGONS. Both films were produced and written by the notorious exploitation showman Harry Alan Towers, and they both feature cult actors Christopher Lee and Klaus Kinski.

If you are a fan of Christopher Lee, and have seen a large number of his movies, chances are you've seen examples of Harry Alan Towers' handiwork. It was Towers who cast Lee as Dr. Fu Manchu in a series of movies based on Sax Rohmer's character in the 1960s. Towers made plenty other wild potboilers during the same period, and most of these films have a lot in common--far-flung foreign locations, beautiful European women, supposedly large-scale and dangerous criminal organizations, and past-their-prime Hollywood stars. Towers' films sound like they'd be a fantastic thrill ride, but for the most part they wind up falling way short of their goal. As a producer Towers had something of a shady reputation (which I won't get into here), but he was still able to churn out movies over and over again, and his casting choices enabled these pictures to have a shelf life far longer than most "reputable" movies made over the same period (this Blu-ray is proof of that).

CIRCUS OF FEAR (1966) is actually one of the best Harry Alan Towers productions, due in most part to the fact that John Moxey was the director. Moxey was a far better filmmaker than the usual Towers director choices such as Jeremy Summers and Jess Franco, and he keeps the slight story interesting with a tight, efficient pace. CIRCUS OF FEAR is usually grouped into the "horror circus" category along with CIRCUS OF HORRORS and BERSERK, but it's more of a crime thriller than all-out terror flick.

The movie opens with a very impressive armored car robbery on Tower Bridge in London. The loot winds up getting hidden at the headquarters of Barberini's Circus, and nearly all of the outfit's performers are involved in some way. Lee plays the hooded lion-tamer Gregor--he spends most of the movie under the mask, which certainly will disappoint many of his fans. The usual pulchritude inherent in any Towers production is mainly reduced here to stunning 1960s bombshell Margaret Lee, who looks very fine in circus tights. Klaus Kinski doesn't have much to do as one of the robbery gang members--but because it's Klaus Kinski, you can't help but closely watch him in anticipation that he might go off the rails at any moment. Towers was able to get fine British character actors like Leo Genn and Cecil Parker to appear in this, and German "Krimi" veteran Eddi Arent provides the so-called "comic" relief. Towers wrote the script under his usual pseudonym Peter Welbeck.

Blue Underground had released CIRCUS OF FEAR on DVD as part of their "The Christopher Lee Collection" box set (as you've probably guessed, I own that). The Blu-ray is in 1.66:1 anamorphic widescreen and it looks fantastic--I doubt that this movie looked this good when it was first released. CIRCUS OF FEAR was originally released in the U.S. as PSYCHO-CIRCUS in a cut-down, black & white version. This Blu-ray features the full-cut color version. Carried over from the original DVD release is a audio commentary by John Moxey and trailers and poster & still galleries.

CIRCUS OF FEAR isn't very gory or violent, but it is a decent crime caper story with enough geek elements to it to make it interesting. It gives Christopher Lee a different sort of role....it just doesn't make full proper use of him.

As for Lee's role in FIVE GOLDEN DRAGONS...it's really more of a cameo. Lee is one of the "Golden Dragons", who are the leading crime lords of a supposedly vast outlaw organization. The other three Golden Dragons shown to the audience (the fifth one is kept secret till the very end) are classic Hollywood tough guys Dan Duryea, Brian Donlevy, and George Raft. Seeing all four of these men in the same scene is a film buff's dream--unfortunately they only all appear for a couple minutes near the end, and they are given basically nothing to do. (Even when they are busted by the authorities, all they do is react glumly like a bunch of kids being told it's past their bedtimes.)

The real star of FIVE GOLDEN DRAGONS is aging Hollywood light comedic leading man Robert Cummings. Cummings' performance here is one of the strangest I've ever seen. He spends almost the whole movie with a goofy grin on his face (even when he's facing danger), and his dialogue is so off-the-wall and confusing that I can only come to the conclusion that the actor was making it up as he went along. Cummings may have felt that the story was a James Bond spoof, but there's nothing else in the film to back that up, except the cartoon-like music during a lame fight scene between Cummings and some of the Golden Dragon's goons. During the movie we are constantly informed about how seriously deadly the Golden Dragons are--yet how can we take that information seriously when they can't even bump off a guy as purposely wacky as Cummings' character? Harry Alan Towers loved using large-scale criminal organizations like the Golden Dragons throughout all his movies--but whether they're run by Fu Manchu, Sumuru, or whoever, these evil groups never to seem to accomplish much of anything.

FIVE GOLDEN DRAGONS was filmed in Hong Kong, and we get to see plenty of the city during this film--so much that it starts to feel like a travelogue. Most of the story has one character following or chasing one another--at a total running time of 104 minutes these scenes get tiresome very quickly. The big highlight of FIVE GOLDEN DRAGONS are the three leading ladies--the three marvelous M's--Maria Rohm, Margaret Lee, and Maria Perschy. All three are drop-dead gorgeous and they give the movie what little verve it has. Maria Rohm was actually Mrs. Harry Alan Towers (lucky guy)--I mention this because she appeared in most of the Towers output, and there always seemed to be a scene of her being tied up or under some type of torture in these movies (here she's tied up and threatened by Klaus Kinski). You can read into that what you will.

The esteemed character actor in FIVE GOLDEN DRAGONS is Rupert Davies, who plays a Shakespeare-quoting police inspector. As mentioned, Klaus Kinski is in it too--his part is about the same as his role in CIRCUS OF FEAR, that of a low-level thug. Kinski still gives it his all, and winds up being more memorable than the movie gives him a chance to be. (By the way, my friend Troy Howarth has a new book coming out called REAL DEPRAVITIES: THE FILMS OF KLAUS KINSKI.)

FIVE GOLDEN DRAGONS is getting its American home video debut on this Blu-ray. It is presented un-cut and in 2.35:1 anamorphic widescreen. Like CIRCUS OF FEAR, FIVE GOLDEN DRAGONS looks amazing for a 1967 low-budget exploitation flick. The extra for this film is an extensive still & poster gallery. Both films are presented on the same Blu-ray disc.

Are the films on this double-feature great classics? No...I'd call them "Psychotronic classics"--the type of films more intriguing to film geeks than a general audience. Christopher Lee and Klaus Kinski don't get all that much of a showcase here, but hardcore buffs of both actors might consider this Blu-ray a decent buy. Blue Underground has done an excellent job with both these titles, and they deserve respect for that.

(By the way...here's some interesting trivia. During the filming of FIVE GOLDEN DRAGONS, Christopher Lee made the acquaintance of Brian Donlevy's wife, Lillian. She was the ex-wife of Bela Lugosi!)
Posted by Dan Day, Jr. at 2:57 PM