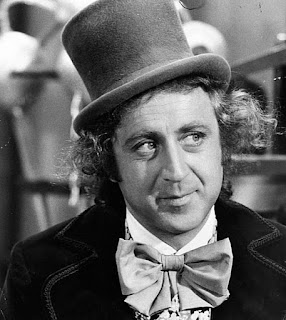 After a long, hot day at work, I came home to find out that Gene Wilder passed away. This one hits a little bit closer to home than most. WILLY WONKA AND THE CHOCOLATE FACTORY is one of my top 100 favorite movies of all time, and I watch it at least once a year. The idea that Mr. Wonka himself could pass away is frankly unnerving. I believe that Gene Wilder as Wonka is one of the most fascinating and brilliant performances in all of movie history.

Even as a kid there was something about Wilder's Wonka that intrigued me. Most movies or TV programs that were supposedly for kids during my younger years had mostly straightforward, predictable characters. There's nothing straightforward or predictable about Willy Wonka. Due to Wilder's magnificent portrayal, you just can't pin the man down. I've seen this movie dozens of times, and I'm sure I first saw it on TV in the 1970s...but every time I watch it, Gene Wilder still has the ability to surprise me.

Gene Wilder's Willy Wonka is mysterious, commanding, austere, and aloof. He's bold, sly, cunning, and winsome. He's goofy, silly, sarcastic, and hot-tempered. He's also dangerous, erratic, manic, and irresponsible. You don't know where he's coming from--or where he came from--and you don't know where he's going. When I was a child, seeing an adult act like this in a movie was a revelation. You couldn't get bored watching Wilder's Wonka. He totally commands the story--yet Wilder's performance feels absolutely natural. Obviously Wilder didn't do the role entirely off the cuff, but everything he does, no matter how unpredictable it might be, just seems right. Every so often, there is a magic combination of the right actor, the right story, and the right movie. Gene Wilder IS Willy Wonka, pure and simple.

Wilder had a huge advantage in that Willy Wonka is never even seen until the movie is almost half over. Wonka is discussed by other characters, but he doesn't sound too appealing...he's set up as a dark, foreboding presence. When we finally are introduced to him, Wilder comes out hobbling like an old man, before doing a perfectly timed comic pratfall. This ingeniously establishes Wonka for the rest of the film as a man who has way more going on than what we see on the surface. The audience--and the characters in the film--cannot take him at face value.

One major reason Wilder's Wonka made such an impression on a generation of kids like me is that at times he's downright scary. Remember the scene with the S.S Wonkatania? Remember how creepy Wilder is in that scene? Nothing in Willy Wonka's factory is explained--and you get the feeling that Wonka himself doesn't really know how it all works. I love how whenever one of the kids or the parents asks Wonka about his fantastic concoctions, the candy maker acts as if it's the most obvious thing in the world, or he acts as if he couldn't be bothered about it. One of the most egregious errors (among many) that the Tim Burton remake of this film made was giving Willy Wonka a backstory (even if it did feature Christopher Lee). I don't want to know the pertinent facts about Wonka's factory, or about the man himself. This is a movie for kids of all ages--you should use your imagination to fill in the blanks, not logic.

And speaking of imagination...the true highlight, for me, of WILLY WONKA AND THE CHOCOLATE FACTORY is Gene Wilder's performance of the song "Pure Imagination". Even as a kid, I thought there was something deeply moving about the way Wilder sings this song. Perhaps the reason for that is there is a tinge of melancholy to it--it's as if Wilder is trying to tell us, "Use your imagination while you can, because we're all going to grow up and have to deal with the real world." I posted a video of Wilder singing this song on the Hitless Wonder Facebook Page, but I must admit that I didn't watch it all the way through, because I probably would have started crying.

There's so many things I could say about Wilder as Wonka....but the man's career was much more than that. I haven't even touched upon THE PRODUCERS, or BLAZING SADDLES, or YOUNG FRANKENSTEIN, or SILVER STREAK, or STIR CRAZY...Gene Wilder was a writer and director as well, and despite his singularly unique style, he was one of the most popular movie stars of the 1970s.

I'll wrap things up by placing an Everlasting Gobstopper on Mr. Wilder's desk, and thanking him for giving us all a Golden Ticket that we can use forever.
Posted by Dan Day, Jr. at 5:34 PM