The British Invaders Blogathon: CONE OF SILENCE (AKA TROUBLE IN THE SKY) Whenever I participate in a blogathon I try, as much as possible, to write about a film or a subject that is not well-known. My pick for the Third Annual British Invaders Blogathon is certainly not a famous film--but it has a well-known cast, especially to those who are film buffs. It is such an accomplished cast that I felt I just had to write a post on it.

I think it is rather simplistic to say that British actors are better than American ones, but there is something impressive about a large gathering of English performers working in tandem with one another. British films of the 1950s and 1960s seemed to have the same actors pop up over and over again, so much so that you have to wonder if all these folks just traveled around on the same bus and went to one film location after another. CONE OF SILENCE (released in the U.S. as TROUBLE IN THE SKY) is a 1960 mystery-drama revolving around the problems of a new airline jet. The film doesn't have a large budget--we don't even see much actual airplane footage, except for the same shots of an airplane model used over and over--and I wouldn't even say it was a great film. But for a picture that might be called a decent little movie, it features an array of acting talent that would top most big-budget spectaculars made at the same time.

The reputable cast includes my favorite actor of all time, Peter Cushing. He made this during his first great horror period at Hammer Films, and apparently he brought along many of his Hammer co-stars along with him. Andre Morell, who had just played Dr. Watson alongside Cushing's Sherlock Holmes in Hammer's THE HOUND OF THE BASKERVILLES, also appears, along with former and future Hammer stars Gordon Jackson (YESTERDAY'S ENEMY), Charles Tingwell (DRACULA, PRINCE OF DARKNESS), Noel Willman (KISS OF THE VAMPIRE, THE REPTILE), Delphi Lawrence (THE MAN WHO COULD CHEAT DEATH), Charles Lloyd Pack (THE REVENGE OF FRANKENSTEIN), and Marne Maitland (THE STRANGLERS OF BOMBAY).

Having all these familiar character actors in one film is one thing...but there's still some more interesting names that need to be mentioned. Michael Craig gets the leading role as airline pilot Captain Dallas, and he'll be remembered by classic movie fans for his role in Ray Harryhausen's epic adventure MYSTERIOUS ISLAND. Bernard Lee, who will forever be known as the first and best "M" in the James Bond film series, plays the maligned Captain Gort. And, last but not least, Hollywood legend George Sanders plays a small but important role as a barrister.

That's an amazing cast, considering that the film they are acting in is all but forgotten today. But there were plenty of British films made during the same period that had a comparable ensemble--proof of the overwhelming amount of extraordinary performers working in the English film and TV industry at the time.

CONE OF SILENCE was directed by Charles Frend, and it was based on a novel of the same name by David Beaty. "Cone of silence" is a pilot term--in the movie it has a double meaning, referring to the silence surrounding the problems with a new airline jet called the Phoenix. The film begins with a court of inquiry on the actions of British airliner Captain Gort (Bernard Lee), who was unable to get a Phoenix to properly take off on a recent flight. The jet skidded off the runway and Gort's co-pilot was killed. Gort is being question by Sir Arnold Hobbes (George Sanders), and due to Sanders' usual droll sarcastic manner, Hobbes all but convinces the court (and those watching the film) that Gort was in the wrong.

Gort is found guilty of pilot error. During the inquiry Gort's daughter Charlotte (Elizabeth Seal) meets Captain Dallas (Michael Craig). The two are attracted to one another, and Charlotte tells Dallas she's convinced that her father did nothing wrong. Dallas later oversees a test flight with Gort, and Gort passes--which enables him to fly the Phoenix again. Despite passing the test, an air of suspicion hangs over Gort--not helped by one of his flights running into a patch of large hail, which breaks a cockpit window. Gort brings the plane in safely, but even a veteran stewardess (Delphi Lawrence) starts to become uneasy flying with him. During another flight, with the overly officious Captain Judd (Peter Cushing) observing in the cockpit, Gort is accused of bringing in a plane too low on a small runway. Airline official Captain Manningham (Andre Morell) decides to ground Gort, but before this happens Gort fills in for a sick pilot--and he fatally crashes another plane while once again failing to take off.

Despite everyone else's assumptions, Captain Dallas is convinced that Gort was not at fault. Dallas suspects that there may be something wrong with the Phoenix itself--and his investigation takes him to the plane's designer (Noel Willman).

At 90 minutes CONE OF SILENCE does have some slow spots--particularly the romantic scenes between Charlotte and Captain Dallas--but the overall mystery behind Captain Gort's troubles will keep the audience's attention. Bernard Lee plays Gort in his typical gruff manner, but at the same time shows that he is a man under tremendous pressure to prove himself. Gort is well aware that many consider him a risk--doubly so because he is a middle-aged man. The viewer can't help but feel sympathetic toward Lee as Gort. Michael Craig is a good leading man, showing determination in getting to the bottom of what's been happening to the flights of the Phoenix. (Sorry--I just had to use that line.) Even though Peter Cushing is second-billed, his role is rather small compared to the rest of the cast. Seeing Cushing in 20th Century contemporary clothes always takes some getting used to. His Judd isn't really a "bad guy" as he is a coldly efficient airline employee. (Having said that, I don't think I'd want to work with him!) The rest of the outstanding cast gives the film a crisp, realistic demeanor. British actors of this period seemed to have a "Let's get on with it in the best way possible" attitude--there's no overly dramatic histrionics here, and there's certainly no "Method" acting going on. There's just good, solid, consistent performances that match the tone and manner of the story.

CONE OF SILENCE is available on All-Region DVD from VCI Entertainment (the disc cover lists the film as TROUBLE IN THE SKY). Unfortunately the DVD is not in widescreen. CONE OF SILENCE can also be screened on YouTube. British film aficionados will definitely want to view it just for the cast alone...and it really is a decent little film.

(By the way....I know somebody out there is going to use a GET SMART joke in reference to this post. All I can say is...you missed it by that much.) 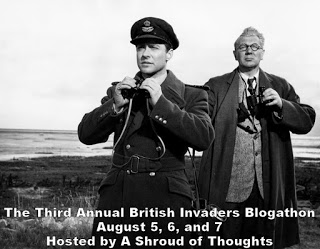