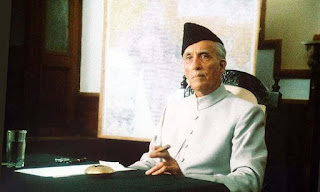 This month (October 2016) Turner Classic Movies is spotlighting the film career of Christopher Lee. This is a welcome, if long overdue honor, even if it appears to be inspired by the fact that Halloween is at the end of the month.

TCM kicked off their celebration of Lee by showing a film which features one of his best performances--despite the fact that very few people have actually seen it. JINNAH is based on the life of Mohammed Ali Jinnah, the founder of modern Pakistan. JINNAH wasn't just making its TCM debut--it was making its North American broadcast debut.

I had never seen JINNAH, and I was particularly excited to finally be able to view Lee in the title role. Lee is quite impressive, but the film itself is a bit challenging to watch.

First of all, as a Midwestern American, I have almost no knowledge whatsoever on the historical background of Jinnah's life, or of the partition of Pakistan and India. The film, co-written, produced, and directed by Jamil Dehlavi, seems to assume that the viewer already knows the pertinent details. There's a lot of incidents going on here, and plenty of other historical figures are presented in the story, such as Nehru, Gandhi, and Lord & Lady Mountbatten. Watching JINNAH I kind of wished for a commentary text at the bottom of the screen to give me some idea of what was happening.

The other problem with JINNAH is that it is not a traditional biography with a linear narrative. The movie starts in 1948, with the aged Jinnah near death. The old man suddenly finds himself in a sort of "way station" where a talkative guide tries to decide where to send Jinnah's soul. Jinnah and the guide spend the rest of the film looking back at various points in the statesman's life, making the film even more confusing. (It also brings to mind such films as A CHRISTMAS CAROL and IT'S A WONDERFUL LIFE.) The story shifts from one time period to another, flashing back to Jinnah's younger days to his success at finally creating a homeland for India's Muslims.

Because of this strange story structure, Lee isn't so much playing the "real" Jinnah as he is playing a fantasy version of Jinnah who is reviewing his life and times. At one point Lee as the elder Jinnah even has a conversation with his younger self. I suppose if one knew about all the details of Jinnah's life, this might be interesting, but it's a very unusual way of presenting a screen biography of a historical figure.

It also makes it hard for someone like me to truly judge Jinnah as a person. Are the scenes presented in this film representations of actual historical incidents, or are they just the biased memories of a dying Jinnah's mind? The movie obviously shows favoritism toward Jinnah, but I'm sure that the man had plenty of detractors, as all major political figures do.

As for Lee himself, he's magnificent. Not knowing anything about the real Jinnah, I can't accurately say how realistic Lee's performance was--but he portrays the statesman as a majestic, proud, and stubborn figure, maybe too proud and stubborn for his own good. Lee's greatest attribute was his powerful screen presence, and Lee uses that to convince the viewer that Jinnah was strong and capable enough to literally change world history.

There's also a great sadness underlying Lee's performance as Jinnah. Lee shows a man who has given up much personally and professionally to achieve his goal, and he also shows that Jinnah is well aware of the human cost of that goal. At the climax of the film, Jinnah is shown going back in time and visiting refugees on their way to Pakistan. When Jinnah comes upon a little girl who has lost her mother, and the girl's father, the statesman breaks down and cries--and you can tell Lee isn't acting, he really did break down. Like all great actors, Lee let the emotions of the moment and the story affect his performance. For a man who spent most of his life playing "unhuman" characters, it is a very true human example of Lee's talent.

Jonathan Rigby's excellent book CHRISTOPHER LEE: THE AUTHORISED SCREEN HISTORY goes into detail on the various controversies surrounding the making of JINNAH, especially the decision to cast Lee as a renowned Muslim leader. According to Rigby, Lee received death threats and the Pakistani government withdrew funding for the production. The actual movie certainly doesn't look cheap, and Jamil Dehlavi directed the film very well. JINNAH is watchable for a Western audience (it was filmed in English), and it isn't boring, but if you don't major knowledge of the people and events shown in the film, you may find yourself somewhat lost.

Despite its problems, JINNAH should be seen by any true Christopher Lee fan just for his performance alone. (After seeing it on TCM, I found out that JINNAH is available on YouTube.) I just wish the movie had been more of a "straight" biography--if it had been, I think Lee would have gotten far more mainstream critical acclaim for it. I've known all along that Lee was a great actor, but JINNAH is just more proof of his larger-than-life talent.
Posted by Dan Day, Jr. at 8:45 AM