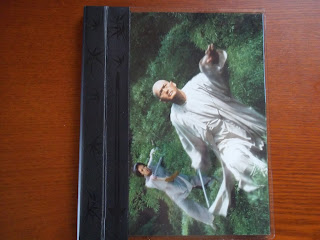 CROUCHING TIGER, HIDDEN DRAGON has just been re-released on Blu-ray by Sony in a number of different formats. The version I bought has a 26-page booklet built into the disc case, featuring interviews with director Ang Lee and co-writer James Schamus, and an essay from David Bordwell about Hong Kong Martial Arts Cinema.

CROUCHING TIGER, HIDDEN DRAGON is one of my 100 favorite movies of all time. I was blown away by it when I first saw it during its American theatrical run in 2000, and I find it even more impressive every time I see it. It has some of the best--and most unique--action sequences ever put on film (staged by the legendary fight choreographer Yuen Wo-Ping), but it is also a very human drama about the consequences of one's choices in life. The three lead performances by Chow Yun Fat, Michelle Yeoh, and Zhang Ziyi are magnificent. I was especially impressed by Ziyi in her breakout role, so much so that she has become one of my favorite actresses of the 21st Century.

The movie won a number of Academy Awards, and it also has to be looked on as one of the most influential foreign films in recent years. Almost every Asian martial arts tale that has come through America in the last 15 years is advertised as being "in the tradition of CROUCHING TIGER, HIDDEN DRAGON".

I believe what attracts me most about CROUCHING TIGER, HIDDEN DRAGON is that despite its being set in ancient China is really is a mixture of several genres, including swashbucklers, historical epics, and American Westerns. You could even say that the characters of Chow Yun Fat and Michelle Yeoh are very reminiscent of Jedi Knights. What is also admirable about the film is its Un-Hollywood nature--the most important & strongest characters are women, and the ambiguous ending is something that would never have been allowed by mainstream American producers.

Sony's new home video release of the movie features a brand new transfer which is stunning. The audio is in 7.1 Mandarin with English subtitles and a 5.1 English vocal track. The Blu-ray has a number of extras, including a new retrospective which has Tasha R. Robinson interviewing Ang Lee, James Schamus, and editor Tim Squyres. There's nothing fluffy about these talks--much of the movie's production history is covered, and Lee reveals that CROUCHING TIGER, HIDDEN DRAGON did not have a very high budget. (I found this surprising since the film has a expansive look to it, and a sumptuous art & costume design.) There are multiple audio commentaries, a photo gallery, and a selection of deleted scenes.

Even if you already have CROUCHING TIGER, HIDDEN DRAGON on Blu-ray, this new edition is a worthy upgrade. In my opinion it is one of the best films made in the last twenty years. It is also the perfect movie to introduce someone to the joys of foreign cinema.