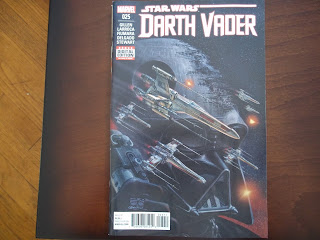 Why am I reviewing a comic book series on a movie blog? Well, that comic book series happens to feature one of the most iconic movie characters of all time. Marvel's DARTH VADER series comes to an end with the just-released 25th issue. Ending the comic may seem to be a surprising decision, considering that this title was a major seller for Marvel, but it makes sense when you think about it.

For one thing, Vader always wears a mask, which doesn't make it easy for any artist to portray his emotional state. Vader also isn't the chattiest guy in the world, and he keeps his interactions with other beings to a minimum, so any comic book writer has to find their way around that. And let's not forget the fact that Vader works best in small doses--kind of like Christopher Lee's Dracula and Blofeld in the James Bond movies. The more exposure one gives to a character like Darth Vader in a monthly comic book, the more chances there are of that character not living up to fan expectations.

Despite all these limitations, I thought the regular writer and main artist of the DARTH VADER comic, Kieron Gillen and Salvador Larroca, handled things admirably. Gillen captured Vader's succinct speech patterns perfectly, and made the Dark Lord's actions throughout the series believable from a Star Wars fan's viewpoint. As for Salvador Larroca, he, in my opinion, was the real star of the series. Thankfully Larroca didn't try and do an interpretation of Darth Vader--the artist drew the character exactly the way he appeared in the movies. What Larroca did do was show what Vader was thinking and feeling by the way the Sith Lord was placed within the frame, and by his posture. Larroca also had a way of showing Vader's state by how much "light" was shown on his helmet. To take a character that looks the same at all times and successfully transfer him to the comics world--without changing that character's appearance--is no mean feat. Salvador Larroca did fantastic work on the DARTH VADER series, and I hope he gets to work on future Marvel Star Wars material. I got the chance to meet Larroca at this summer's Wizard World convention in Chicago. 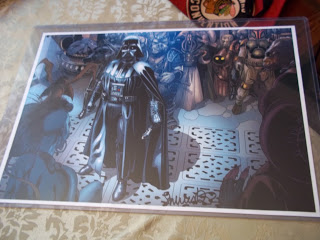 A print of Salvador Larroca's work for Marvel's DARTH VADER--signed by the artist!

The DARTH VADER series began right after the destruction of the Death Star. Because Vader was the only Imperial survivor of that event, he's under suspicion from the Emperor. In the early issues of the series, Vader spends his time seeking out the pilot that destroyed the Death Star, which leads to the Dark Lord finding out about Luke Skywalker being his son, Vader starts to run his own personal "missions" with help from a disreputable archaeologist named Dr. Aphra. Dr. Aphra became something of a sounding board for Vader, which is understandable for a comic book. (If Vader didn't have a "companion", he probably wouldn't have said a word during most of the issues.) I felt, though, that the character of Aphra--young attractive female who can kick butt and has a sarcastic attitude--was designed too much for the tastes of the average fanboy. I kind of wish Vader had an allay that was a bit more original.

Vader and Aphra were joined by the droids Triple-Zero and Beetee. These two were basically evil versions of C3P0 and R2-D2. Triple-Zero still had C3P0's fussiness, but he spent his time going on about how much he enjoyed killing and torturing other beings. The droids were funny when first introduced, but after a few issues I kind of got annoyed by them.

At the end of just about every issue of DARTH VADER, the Dark Lord would find himself in a dangerous situation up against impossible odds--and of course, because he's Darth Vader, he would find a way to get out of it. The various characters in the series who were created to be obstacles to Vader--such as the mad scientist Cylo, who was creating warriors for the Emperor through genetics--didn't seem all that much of a threat. One could tell as the series went along that Marvel was grasping for ideas on what to do with Vader. 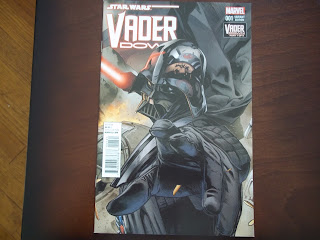 I felt the highlight of the series was the "Vader Down" storyline, which was introduced in a special VADER DOWN issue, and continued in both the DARTH VADER and STAR WARS comics. Darth Vader finds out from Dr. Aphra that Luke Skywalker is heading to an ancient Jedi temple on the planet of Vrogas Vas. Vader, in his personal TIE fighter, heads off to confront Luke there, only to find that the planet is home to a secret Rebel base. Luke purposefully crashes his X-Wing into Vader's ship, causing the Dark Lord to land on the planet. A huge Rebel force is sent to take Vader out once and for all, and Princess Leia and Han Solo accompany them. The entire storyline would make a great standalone Star Wars film, and it contains my favorite scene in the entire Marvel DARTH VADER comic series. It happens at the end of the VADER DOWN special issue (which was written by Jason Aaron with art by Mike Deodato), soon after Vader crash-lands on Vrogas Vas. Vader is met by a huge Rebel force, and is told that he is surrounded. In response, Vader solemnly intones, "All I am surrounded by is fear. And dead men."

Marvel's DARTH VADER was good enough for me to start going back regularly to my local comic book shop, which is something I haven't done since the mid-1990s. I certainly felt that the series had the proper Star Wars tone to it....and that's something I couldn't always say about the Dark Horse Star Wars comics of the 1990s, or even the classic Marvel Star Wars issues of the 1980s. I wouldn't be surprised if Marvel has special Darth Vader mini-series and annuals in store for the future. I just hope that they involve Kieron Gillen and Salvador Larroca.