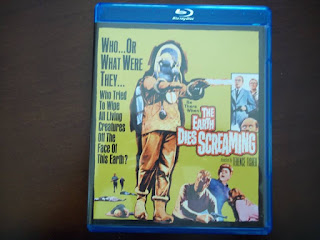 Kino has released the 1964 British science-fiction film THE EARTH DIES SCREAMING on Blu-ray. The title makes one think of a globe-spanning out-and-out thrill ride, but this movie is definitely not that. It's an efficient, low-key little B picture, nothing more.

If this movie is remembered at all today, it is because it was directed by Terence Fisher, master of the English Gothic. THE EARTH DIES SCREAMING is decidedly English, but it certainly isn't Gothic. The movie seems like it was made in 1954 instead of 1964. It is very reminiscent of the black & white programmers Terence Fisher directed for Hammer Films before his "breakthrough" with THE CURSE OF FRANKENSTEIN. The co-producer of THE EARTH DIES SCREAMING was B movie maven Robert Lippert, who also produced a number of those early Hammer films directed by Fisher.

The movie starts out with a number of individuals dropping dead right in the middle of doing something--we see a train, a car, and a plane crash. (If these scenes remind you of VILLAGE OF THE DAMNED, that's because some of the footage was taken from that movie!) The focus then switches to a small English village, where eventually seven survivors gather--five middle-aged men and women, and a young married couple. The group comes to the conclusion that some sort of gas was used to kill nearly everyone off, and that this is the beginning of an invasion. Soon bizarre robots are seen roaming the village, and the survivors have to fight off these threats as well as the corpses reanimated by the automations.

THE EARTH DIES SCREAMING is only about an hour long, and it feels more like an episode of a TV show instead of a feature-length film. The entire story takes place in and around the English village, and although the survivors talk about how what ever is happening is going on all over, we never really see any of it. The survivors also assume that the robots are controlled by aliens--but once again, we never really get any proof of that. The movie's very low budget makes the supposed world-wide phenomenon seem very local and very compact--diluting the fear that the entire Earth is at stake.

What also hurts the film, excitement wise, is that the leading man is American actor Willard Parker, and he isn't exactly the most dynamic guy in the world. The performer who makes the most impact is the great British character actor Dennis Price, as a shifty survivor who later gets "zombiefied". Price does have the advantage of having the most interesting role. Thorley Walters, who memorably appeared in a number of Terence Fisher's Hammer horrors, is in the film as well, but his character is more ineffectual than humorous.

Terence Fisher does the best he can with the slight material. Obviously science-fiction was not his forte, despite the fact that he directed a number of films in that genre. (My pick for the best Terence Fisher sci-fi film is ISLAND OF TERROR.) Fisher usually gets either too much credit or not enough from film buffs. In THE EARTH DIES SCREAMING he gets a few chances to bring something extra to the tale, such as revealing the robots the way he would reveal a vampire or one of Frankenstein's monsters. Like just about every British sci-fi film of the 1950s and 60s, (including DEVIL GIRL FROM MARS, THE CRAWLING EYE, ISLAND OF TERROR, NIGHT OF THE BIG HEAT, etc.) much of the story takes place in a pub-like setting, where the characters talk about what is going on instead of the movie visually showing what is going on. I can imagine that plenty of kids were squirming in their seats while watching this movie when it first came out.

THE EARTH DIES SCREAMING does have a connection with the geek culture of today--with its reanimated zombies threatening a rag-tag small group of survivors, it anticipates not only NIGHT OF THE LIVING DEAD, but the whole "Walking Dead" genre that is so prevalent in the 21st Century. I wouldn't call it a groundbreaking film though--I've seen episodes of THE TWILIGHT ZONE that had a far more imaginative scope. The movie does feature an atmospheric music score from Elisabeth Lutyens.

Kino presents THE EARTH DIES SCREAMING in black & white 1.66:1 anamorphic widescreen, and the visual and sound quality is top notch. An animated image montage is included, and a few trailers of other Kino releases. The main extra is an excellent audio commentary by Richard Harland Smith. Smith gives an entertaining and informative talk, and he goes out of his way to compare the film with other similar genre outings. He also brings up the urban legend that Terence Fisher made this film because he was under "exile" from Hammer due to the underwhelming response of the 1962 THE PHANTOM OF THE OPERA.