The 50th Anniversary Of THE GOOD, THE BAD AND THE UGLY 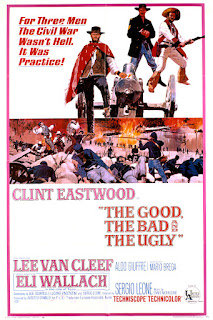 Fifty years ago, in 1966, THE GOOD, THE BAD AND THE UGLY was produced in Spain and Italy. It is my second favorite film of all time, so accordingly a blog post commemorating this anniversary is in order. Instead of going into the details about the production history of the film, or the storyline, I'm going to discuss why GBU has had such an affect on me personally.

I vividly remember when I first saw GBU. It was sometime in the mid-1980s, on Channel 32 WFLD Chicago. This was at the very beginnings of my film geekdom. I was already a huge Clint Eastwood fan--most American males growing up in the late 70s-early 80s were--but at that time I still had not seen any of the Spaghetti Westerns the actor had made with director Sergio Leone.

I had heard about GBU, of course, and I was highly anticipating seeing it--for about a week in advance Ch. 32 had been running commercials touting its presentation. To say that it lived up to my expectations is a severe understatement.

First of all, I had never seen anything like GBU. (I do have to admit that at that point in time I had not seen a number of famous films.) Everything about the film--the pacing, the shots, the editing of it, the uniqueness of it all--intrigued me. Certainly at that time I wasn't able to articulate what I was feeling, but I knew I was watching a movie that would change how I felt about movies in general.

How powerful did that first viewing of GBU affect me? Consider that I was watching it on a portable TV, in pan-and-scan, with frequent commercial interruptions--and it was more than likely edited. It still bowled me over. I've seen it several times since (I watch it at least a couple times a year), and my appreciation of it just keeps growing. On the surface it is a crude, violent Spaghetti Western. But there is a vastness to it--it is far more ambitious than Leone's earlier A FISTFUL OF DOLLARS and A FEW DOLLARS MORE. GBU is a long, meandering film, in which the main characters journey all over the American Southwest in search of gold during the Civil War. The characters are in a hurry to get the gold, but the story takes its time in getting them there. The trials and tribulations that the characters go through in order to get to their final destination is reminiscent of mythological tales.

Author Danny Peary, in his CULT MOVIES books, has even suggested that Leone's Westerns take place in some bizarre alternate universe where what we perceive as "reality" does not apply. When I first read that theory I thought it sounded pretentious--but GBU does seem to play out on a weird, alien setting. The Spanish locations no doubt contribute to that atmosphere, but all of Leone's films have their own kind of internal logic. If you want realism, you'd better stay away from the cinema of Sergio Leone. Trying to explain the screenplay of GBU is a thankless task--Leone wasn't interested in the movie making sense, he was after the "big moment"--and GBU has plenty of them.

For the first big moment, let's start out at the start of GBU--when we see the face of actor Al Mulock suddenly appear in an extreme close-up. Mulock and two other men are shown slowly advancing on a ghost town, with determined looks on the faces. At first the viewer assumes that the men are going to engage in a shootout with one another, but the trio are all after the same man. The trio break through the door of a dilapidated building, we hear the sounds of gunfire, and a figure jumps through one of the building's windows. It is here that we are finally introduced to one of GBU's main characters, Tuco, in the form of Eli Wallach. There is no dialogue in this sequence, there is no explanation to why the three men are trying to kill Tuco--we are given no relevant information about what is going on. It's a sequence that grabs the viewer's attention and makes one wonder what the heck is going on. The introductions of Lee Van Cleef and Clint Eastwood follow the same pattern--these men just appear, and when they do, we are not told who they are, or what their purpose is. I realize that this type of storytelling would drive an audience used to 21st Century entertainment nuts--but to me it is fascinating. Because we know so very little about the characters in GBU, they seem to have a larger-than-life aura about them.

The one GBU character we do wind up knowing something about is Tuco--you could say that he is a "lower-than-life" character. I wrote a blog post in June 2014 fully examining Eli Wallach's brilliant portrayal of Tuco, so I won't discuss him too much here. But I will say that Tuco is the real star of GBU, and having an actor like Wallach play against such stoic performers as Van Cleef and Eastwood was a clever move on Leone's part. Every time Tuco is on screen, it is a big moment.

There are so many other highlights in GBU it would take me forever to fully discuss them all. The prison camp sequence, the shootout between Van Cleef's gang and Wallach and Eastwood in the bombed-out town, the epic Battle of Langstone Bridge, the three-way gunfight at the end--all of these sequences are almost mini-movies in themselves, and each one of them would be the major focus of any other movie. The fact that all these set pieces are in one film is a testament to Leone's ability as a filmmaker. Film is a visual medium, and GBU is as visual as it gets. Try comparing GBU with any other film made in 1966, and you'll see why Leone's directorial style hasn't aged. GBU seems years ahead of its time, because it really doesn't belong to any period, despite its being set during the American Civil War.

Speaking of GBU and the Civil War--for years and years I assumed that the Civil War incidents shown in the movie were pure historical fiction. But there really was a New Mexico-Texas campaign in the war, and the opposing Generals mentioned in the movie (Canby and Sibley) really did exist, and they did serve in that campaign. Was the campaign as extensive as what is shown in GBU? I doubt it, but it's telling that Leone went out of his way to try and include actual Civil War detail in the story, when so many "respectable" films based on the war get so many things wrong.

Any discussion of GBU has to include the iconic music of Ennio Morricone. The music for GBU is as important as any of the actors, or even Leone's style--some have suggested that Morricone "directed" the film as much as Leone did. The synthesis between Morricone's score and the movie is absolute--you cannot take one away from the other. The very first original soundtrack I ever bought (on cassette tape!) was THE GOOD, THE BAD AND THE UGLY soundtrack. I've been a Morricone fanatic to this day. Fifty years later, you can hear "The Ecstasy of Gold" on TV commercials, and the GBU main theme has been used in various ways. The GBU soundtrack has to be considered one of the most important scores in movie history.

So many things have come about because of my first viewing of GBU. It was the first Sergio Leone film I had ever seen, and since then I've seen all of his films, and he has become one of my favorite directors. It revealed to me the magnificence of the music of Ennio Morricone, and showed me the importance a score has on the perception of a movie. I wasn't that much of a Western fan before seeing GBU, and after I started to appreciate and learn more about one of the cinema's greatest genres. Watching THE GOOD, THE BAD AND THE UGLY opened me up to how movies didn't have to fit a certain pattern, or have a normal running time, or have "regular" leading characters. GBU is exciting, funny, grandiose, sarcastic, moving, violent, and altogether stimulating. Many modern-day filmmakers have tried to copy the Leone style, but they can't. There's nothing like THE GOOD, THE BAD AND THE UGLY--it stands on its own.