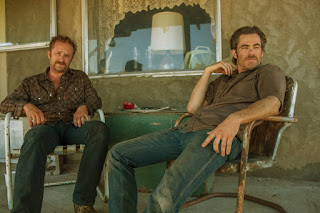 A couple months ago, one of my Twitter followers (yes, I actually have some) asked me if I had seen a film called HELL OR HIGH WATER. I had not even heard of it, but my internet friend stated that it was the best movie he had seen in a long time. A few weeks ago, Glenn Erickson reviewed the film in his excellent DVD Savant web column. Erickson was also impressed by it--he even called it a "Trump Western". Erickson felt that the film accurately reflected the angst felt by lower middle-class white folks, supposedly the type of people who voted for Donald Trump.

I believe that Erickson might be reading too much into the film--HELL OR HIGH WATER is the type of story that would work just as well in the 1970s or 1980s as now. It isn't really a modern Western, or a crime story, as it is a serious American modern adult drama--the type of picture that it is almost totally ignored today.

The main character in HELL OR HIGH WATER is Toby Howard (Chris Pine). To say that Toby is down on his luck is an understatement--his mother has just died, he is separated from his wife and children, he owes money on his farm, he's behind on his child support payments--and he's broke. Toby decides to start robbing banks--specifically branches of the Texas Midland bank, the same institution that he owes money to. Toby is assisted in this endeavor by his ex-con older brother Tanner (Ben Foster)--an unstable bad-ass acting fellow. The brothers' crimes attract the attention of a soon-to-be-retired Texas Ranger (Jeff Bridges), who is convinced that there is some sort of purpose to these robberies. Toby hopes to get enough money to pay off his debts before he gets caught, or before his brother screws things up.

HELL OR HIGH WATER is set in a economically depressed section of West Texas, a location the movie shows as filled with abandoned buildings and foreclosed homes. The small towns that the Howard brothers travel through are arid and desolate, contributing to the movie's mood of foreboding. Director David Mackenzie uses a very welcome traditional movie making style, with lots of wide angels and long takes. There is some gunplay, but it is shot in a realistic manner instead of the video-game tactics one sees in so many features of today. Taylor Sheridan's impressive script is sparse and to the point. What's even better about it is that the people in this film look and act like regular folks, instead of Hollywood's usual way of portraying red-staters as either country bumpkins or excessively quirky weirdos.

The movie doesn't try to show the Howard brothers as heroes, or ask the audience to feel sorry for them. Chris Pine really impressed me as Toby--the cocky arrogance the actor shows as the modern Captain Kirk is nowhere to be found here. Pine's Toby is a man who has been beaten down by his circumstances, and a man who takes no pleasure or satisfaction in doing wrong to solve his problems. Ben Foster gets the showier role of Tanner, the type of guy who goes out of his way to show everyone how tough he is. (I know plenty of guys like that in Northern Indiana.) Every time Foster is on the screen, you're waiting for the other shoe to drop, because the actor does a fine job in putting across how out of control his character is.

Jeff Bridges could very well get another Oscar nomination for his role as Texas Ranger Marcus Hamilton. The Ranger is old in age and in attitude--his politically incorrect conversations with his Native American-Mexican partner (Gil Birmingham) are among the film's highlights. Bridges makes you totally believe that Marcus is a real person, and he dominates every scene he is in.

HELL OR HIGH WATER is the type of film that Hollywood used to make all the time--a lower budget realistic drama that doesn't look cheap and is still able to have big-name stars. It also has an ending which one rarely sees anymore--an ending showcasing acting and dialogue instead of explosions. If you are tired of superheroes and billion-dollar franchises, HELL OR HIGH WATER is the perfect medicine. It certainly deserves to get more attention.