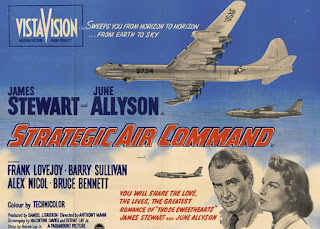 Olive Films has just released the 1955 Air Force epic STRATEGIC AIR COMMAND on Blu-ray. The movie is one of the many collaborations between actor James Stewart and director Anthony Mann.

Jimmy Stewart was a life-long aviation buff, and he had a distinguished record serving as a pilot in World War II. After the war Stewart continued to serve in the U. S. Air Force Reserve. Stewart got to know General Curtis LeMay, the head of Strategic Air Command (SAC), and felt that the department would be a worthy subject for a film.

STRATEGIC AIR COMMAND almost plays as a sequel to a couple of earlier Jimmy Stewart films: THE STRATTON STORY and THE GLENN MILLER STORY. In both those movies June Allyson plays Jimmy's supportive wife, and she does the same thing again in STRATEGIC AIR COMMAND. THE STRATTON STORY had Stewart playing real-life baseball pitcher Monty Stratton, and here he plays Robert "Dutch" Holland, a star baseball player for the St. Louis Cardinals, who is recalled by the Air Force.

At first Holland is frustrated by his situation--he and his wife Sally have only been married a few months, and it may be a couple years before he's able to play baseball again. As the story goes on, Dutch starts to grow into his role as a pilot for SAC--so much so that he decides to stay on full-time, much to the consternation of Sally.

There really isn't much of a plot to STRATEGIC AIR COMMAND--the most dramatic sequence in the movie details Dutch and his crew having to crash land in Greenland. The film is basically a tribute to the United States Air Force, which gave the production full cooperation. It is a Cold War era presentation for why America must be prepared at all times, with the audience following along Stewart through his experiences. If any other actor had played Dutch Holland, the movie would be a bit stiff--but Jimmy Stewart's likable persona, as always, shines through. Despite the fact that Dutch is a famous baseball player, and the pilot of one of the most advanced machines of the time, he still comes across as an ordinary fellow, and the type of guy we'd like to watch and spend time with.

The real stars of STRATEGIC AIR COMMAND are the majestic planes featured in the film, especially the B-36 and B-47 jet bombers. About midway through the film, after his experience in Greenland, Dutch is told about the birth of his daughter. A few minutes later, Dutch is shown the B-47 for the very first time--and he reacts with more emotion than he did when he found out about his new child! That kind of tells you where this movie's sympathies lie. The flight sequences are spectacular, and they will be very appreciated by film buffs. (Baseball fans should also take note that this film features footage shot at Al Lang Field, the spring training home of the St. Louis Cardinals at that time.)

STRATEGIC AIR COMMAND was filmed in the famed Vista Vision process, and Olive's Blu-ray has gorgeous color and precise clarity. The Blu-ray is in anamorphic 1.66:1 widescreen, and it looks as if it was made this year instead of 60 years ago. (William Daniels was responsible for the cinematography.) As usual with Olive's releases, there are no extras...and that's too bad, because a title like this begs for a audio commentary by someone who is an expert on James Stewart's life and acting career.

James Stewart is one of my favorite actors of all time, so obviously I was going to buy this. It isn't on the level of the Jimmy Stewart-Anthony Mann Westerns, but it is of great interest to aviation fans. STRATEGIC AIR COMMAND is very much a Cold War period piece. Can you imagine any major film actor of today wanting to make a film extolling the virtues of an American military defense program?