Issue #37 of Richard Klemensen's wonderful LITTLE SHOPPE OF HORRORS is now available, and it's filled with all sorts of goodies. This issue focuses on the wild & woolly Hammer production THE LOST CONTINENT (filmed in 1967), and the cover, featuring artwork by the ultra-talented Mark Maddox, perfectly sums up the film's tone. 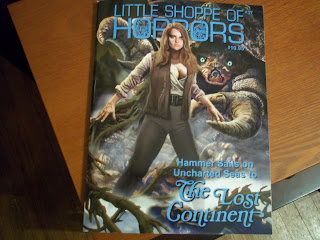 The last issue of LSOH, which examined the 1979 film version of DRACULA, inspired me to write a blog post on that movie, which was well received. So I've got no choice but to put down my thoughts on THE LOST CONTINENT.

I first saw THE LOST CONTINENT on the American cable network TBS back in the early 1990s. (TBS and its sister station TNT showed Hammer movies quite regularly in the late 80s and early 90s.) I now own the Anchor Bay DVD of the film. For many years THE LOST CONTINENT was considered one of the weaker Hammer outings. It is not a straight "horror" film--it is really a bizarre adventure tale, with horror and science-fiction elements mixed in. It doesn't feature Peter Cushing or Christopher Lee, or any of the more famous Hammer Hotties. It is a film that is almost impossible to categorize, and for that reason some have overlooked it. When I first saw it I felt it was just too strange for me to fully embrace--but upon later viewings I have come to recognize it as a rather intriguing attempt by Producer-Director-Writer Michael Carreras to do something different within the Hammer formula....and I would say he succeeded.

THE LOST CONTINENT is based on a novel by Dennis Wheatley called UNCHARTED SEAS. (At an early point in the film, the character played by Nigel Stock is seen reading a paperback version of this novel.) Dennis Wheatley was a popular British author of the mid-20th Century, but I'd venture to say that if anyone knows of him now, it is because of the Hammer film adaptations of his work, specifically the 1968 Terence Fisher-directed THE DEVIL RIDES OUT. I haven't read the novel, but Michael Carreras was taken by it, and felt it would be perfect for a film.

Michael Carreras was the son of Hammer's chief James Carreras, and he felt that the company should branch out into other genres than just classic horror. The films that Michael Carreras personally directed for Hammer vary wildly in the final outcome, but one thing you have to say for them is that they all try to be different in some way. In his main feature article in LSOH on THE LOST CONTINENT, Bruce Hallenbeck calls the movie Hammer's wildest--and he's probably not far off the mark with that statement.

THE LOST CONTINENT has everything including the sink--at one point the captain of the ship, efficiently played by Eric Porter, sets off some explosives in a sink. The movie features a ship's mutiny, a hurricane, a shark attack, treacherous seaweed, giant monsters, a cargo hold filled with dangerous explosives, descendants of 16th Century Spanish explorers, beautiful women (who all have various issues)...it's a smorgasbord of numerous B movie elements, all served up with a cast that plays it absolutely straight the entire way.

The story of THE LOST CONTINENT centers on a run-down freighter called Corita, which is sailing in the South Atlantic Ocean. The ship is carrying a few passengers, and all of them have secrets they are hiding or pasts they are running away from--it is literally a "ship of lost souls". If that isn't enough, the captain (Eric Porter) has decided to carry aboard a large amount of explosive phosphates. The ship is given a hurricane warning, but neither the captain or the passengers wish to turn back. The crew, however, has other ideas--especially when they find out about the explosives. They mutiny and leave the ship on a lifeboat, and the captain and the passengers also have to leave the same way when the Corita runs into the storm.

As the lifeboat approaches the Sargasso Sea, the survivors find that the water is becoming more and more filled with a thick seaweed that seems to be forcing the boat in a certain direction. The motley group discovers a "graveyard" of wrecked ships, some of them several years old, that have been trapped by the weed. The Corita is there as well, and the group gets back on the freighter, and tries to figure out how to escape. But their plans are interrupted by the discovery that there are other beings in this strange sea of weed....a young woman arrives out of this mist, walking on the weed, with the help of pontoon shoes and balloons strapped to her shoulders. 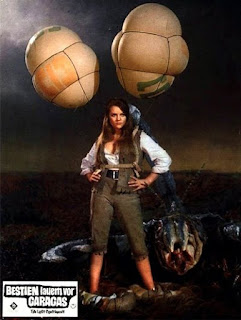 Gillespie's character is on the run from men dressed like Spanish conquistadors, who attack the ship. It turns out that this unsavory realm is ruled over by these Spanish descendants, who impose a harsh judgment on those who defy them. The survivors of the Corita use the explosives in the ship's hold to fight the religiously fanatic Spaniards, and destroy their Galleon.

My description of the plot just doesn't do it justice--THE LOST CONTINENT is something you have to see for yourself. I didn't even cover the giant crab, or the giant scorpion, which were both built by Disney FX artist Robert Mattey, or the culture of the hardcore Spanish Catholics that give the main characters so much trouble (you could do an entire film based on that aspect of the plot alone--I think it's the most fascinating thing about THE LOST CONTINENT).

In his article on the film Bruce Hallenbeck states that THE LOST CONTINENT was Hammer's most expensive production up to that time. It may not look like that today, but for me the sea of weed, with its many trapped ships, is rendered most effectively. The Spanish Galleon set is quite impressive, and its eventual destruction during the film's climax is one of the most spectacular scenes ever in a Hammer film.

THE LOST CONTINENT may not have what one considers a "typical" Hammer cast, but the actors that do appear work very well. I've already mentioned Eric Porter, and he is joined by a couple of striking ladies in Hildegard Knef and Suzanna Leigh. (I've met Suzanna Leigh at a Monster Bash, by the way.) The great character actor Michael Ripper even shows up in a small role as one of the mutinous crew. The appeal of Dana Gillespie is, uh, obvious, and mention must be made of stuntman Eddie Powell as "The Inquisitor", the man who controls the leader of the Spanish descendants, the young "El Supremo". There's something very disturbing about how the Inquisitor goes into deep prayer while he and the Galleon he is on go up in flames. (According to Bruce Hallenbeck, Christopher Lee was at first going to play the role of the Inquisitor in a unbilled cameo. Lee apparently turned it down, but it wouldn't have made much sense for a publicity-obsessed company like Hammer to use Lee in such a way.)

A couple other things I have to mention about this film. The movie actually has a title song, which was very unusual for a Hammer production. The song hasn't aged as well as the film--the tune is very much a 1960s style lounge piece. And I have to point out the creature that is kept inside of the bilge of the Spanish Galleon, a creature used to dispatch those who trespass against El Supremo. The creature appears to be a killer salad, and looks very much like the Sarlacc featured in RETURN OF THE JEDI. Did George Lucas see THE LOST CONTINENT while he was a film student as USC?

To sum it all up, THE LOST CONTINENT is a wild, wacky out-and-out strange adventure tale--but it is an entertaining one. Many other adventure films that have far bigger budgets--and far bigger reputations--aren't nearly as fun as THE LOST CONTINENT. Some Hammer fans have dismissed this movie because it is not a true horror film. Hammer movies have never really scared me as much as they have set off my imagination. I would define the best Hammer films as bizarre adventures instead of horror movies. THE LOST CONTINENT is probably the most bizarre Hammer adventure of them all.