HORROR (AKA THE BLANCHEVILLE MONSTER) 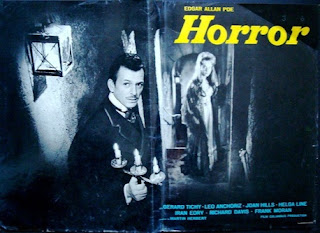 My Euro Gothic tour continues with a 1963 Italian-Spanish production called HORROR. The movie was released in the U.S. as THE BLANCHEVILLE MONSTER. The print I viewed on YouTube had the HORROR title, but with an English dub track.

As you can see on the poster above, HORROR tries to pass itself off as a Edgar Allan Poe adaptation, even though officially it isn't. The movie owes more to the Roger Corman/AIP film adaptations of Poe than anything the author actually wrote. HORROR contains elements similar to such Corman entries as HOUSE OF USHER, THE PIT AND THE PENDULUM, and THE PREMATURE BURIAL. The lead actor, Gerard Tichy, bears a certain resemblance to Vincent Price--and he plays a brooding character named Roderick. To top it all off, HORROR has a fog-shrouded dream sequence much like the ones Corman would put into almost all of his Poe productions. The one major thing HORROR does not have in common with the AIP Poes is that series' lush color--but the atmospheric black & white photography is more than sufficient.

The story concerns the young & pretty Emily de Blancheville, who, in the late 19th Century, has returned to her French home after a number of years abroad. Accompanying Emily is her best friend Alice, and Alice's brother John. The trio are dismayed to find that Emily's brother Roderick acts strangely, and that he has replaced all the servants with a group of suspiciously acting newcomers. Soon Emily begins to feel that the spirit of her late father is calling her to an early grave, and Alice and John try to get to the bottom of things.

Director Alberto De Martino piles on the Gothic trappings in spades. The new housekeeper, played by European cult actress Helga Line, comes off as a younger and more attractive version of Judith Anderson's character in Hitchcock's REBECCA. (If you have seen HORROR EXPRESS, Helga Line almost steals that movie as the sultry spy.) The supposed "spirit" of Emily and Roderick's father goes about in a black cloak, and both Emily and Alice spend a considerable amount of time--you guessed it--wandering dark corridors while wearing nightgowns and holding up candles. HORROR has a slow, stately pace to it, and at about 90 minutes, some might say that much of the spooky aspects of the tale might have been curtailed a bit. At least De Martino does take his time enough to stage some striking shots, such as having Emily (in a white nightgown, of course) slowly making her way through the de Blancheville's ruined abbey in a long shot.

HORROR is very much a traditional Gothic thriller, without the wild excesses that one usually finds in a Euro Gothic. Everything in it is familiar, and there's nothing in the movie that is particularly groundbreaking--but it does what it is designed to do. It is the type of movie that is best watched late in night when you are unable to sleep. It would be interesting to see a remastered version of HORROR on Blu-ray, especially one that didn't have the dubbed track--if I could view it that way I'm sure my appreciation of it would grow. HORROR does have some striking sequences, and those who are drawn to this genre will enjoy it.