THE PLAYGIRLS AND THE VAMPIRE 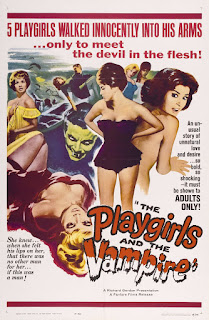 My "Euro Gothic" viewing binge continues with the 1960 Italian film L'ULTIMA PREDA DEL VAMPIRO, which was released in the U.S. as THE PLAYGIRLS AND THE VAMPIRE. The version I watched on the internet had the American title and was dubbed in English.

THE PLAYGIRLS AND THE VAMPIRE was produced soon after THE VAMPIRE AND THE BALLERINA (see my last post), and the two films share a lot in common. Both pictures have a group of gorgeous dancers involved with the undead, and Italian actor Walter Brandi stars in each. Brandi was the very underwhelming head vampire in THE VAMPIRE AND THE BALLERINA--here in PLAYGIRLS he plays another sadly lacking vampiric menace, and his modern-day descendant. Both films are also in black & white, and both are set in contemporary times.

The "Playgirls" of the story are five alluring members of a down-and-out dance troupe, who seek shelter at a mysterious castle along with their comic-relief manager and the group's accompanist. (The accompanist, by the way, is a young, handsome man who is constantly being hit on by the ladies, so one would assume that he winds up being the story's hero--but at the climax he doesn't contribute much help at all.) The castle is the ancestral home of the Kernassy family, and the current Count (the aforementioned Walter Brandi) isn't too happy about letting the group stay. The Count warns his guests not to leave their rooms at night--and of course no one listens to him, because this is an Italian Gothic horror film, and you've just got to have nightgown-wearing cuties wandering around dark corridors.

It isn't too long before one of the girls is found dead, and another girl starts to feel strangely attracted to the dour Count. The Count is supposed to be one of those soulful romantic types, but due to Brandi's non-magnetic personality and a mediocre English dubbing job, one wonders what the beautiful dancer sees in him. (The plaid suit jackets the Count constantly sports doesn't help his cause.)

The late member of the troupe rises out of her grave to become a vampire--but the twist in this film is that she wanders around naked. Except for one very brief topless shot, she's always in shadow--but the very idea of her being undead in her birthday suit is a rather racy one for an early 1960s black & white horror film, even if it is from Europe. Remember that this was a decade before THE VAMPIRE LOVERS. The nudie vampire gets the stake, in a scene that kind of anticipates a similar one in THE SATANIC RITES OF DRACULA.

For most of the film the Count is set up as being the main menace--but it's really his centuries-old ancestor who is the cause of all the trouble. Apparently the modern-day Count is trying to "cure" his relative's affliction (shades of HOUSE OF DRACULA). Writer-director Piero Regnoli brings some decent atmosphere to the tale, but the Gothic trappings are watered down by the girls. Collectively they're pure eye candy, but individually none of their characters are very interesting. One does get to see them in lingerie numerous times, and we're treated to one dance number, in which one of the ladies starts performing a striptease--she's stopped from concluding it, however, by the doleful-looking maid of Kernassy Castle.

Like THE VAMPIRE AND THE BALLERINA, THE PLAYGIRLS AND THE VAMPIRE is an okay early Italian Gothic, but it certainly can't be put on the same level as something like Mario Bava's BLACK SUNDAY. The ladies are attractive, if a bit annoying, and the climax, set in the Kernassy crypt, brings to mind the Universal classics of the 30s and 40s (except those movies didn't feature a nude bloodsucker). If you are a fan of classic horror it is worth seeking out.