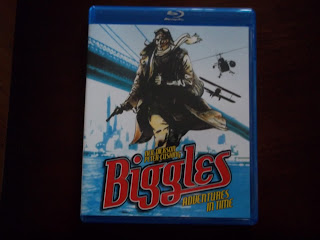 Kino Lorber, through their Studio Classics line, has released the 1986 film BIGGLES on Region A Blu-ray. (On the disc case the movie is sub-titled ADVENTURES IN TIME, but the actual movie only has the title BIGGLES.) The most noticeable thing about this picture is that it is the last theatrically released film to feature a performance from the great Peter Cushing.

BIGGLES is based on a character of a World War One-era Royal Air Force pilot which appeared in a number of novels written by English author W. E. Johns. The only other time I have ever heard of Biggles in any other context other than this movie is when Monty Python would mention the character in some of their comedy skits. Being an American, it's not surprising that I wouldn't know much about Biggles, but I have to wonder how many people knew about him even in 1986.

The movie tries to introduce audiences to Biggles by sticking him with a "modern" counterpart. 1980s New York yuppie Jim Ferguson (Alex Hyde-White) finds out that he is a "time twin" of WWI pilot James "Biggles" Bigglesworth (Neil Dickson). The two men continually pop into each other's time streams. While in Biggles' time, Jim is forced to help the war hero stop the Germans from using a sonic super weapon to change the course of history.

Apparently the producers of BIGGLES felt that the character needed some sort of gimmick to get the attention of contemporary viewers--hence the time travel element. This begs the question--if the filmmakers were not comfortable in Biggles carrying a film on his own, why did they use him in the first place? Director John Hough (who worked with Cushing in Hammer's TWINS OF EVIL) does his best with what he has, and the movie has some nice aerial sequences, but BIGGLES has more than a few problems. The synth-pop music score hurts the movie badly, and ruins whatever adventurous mood is trying to be conveyed. The "time twin" concept doesn't make a lot of sense, even after Peter Cushing himself tries to explain it. The script's many lame attempts at humor fall totally flat, and Jim Ferguson is not written very well--he comes off as annoying and someone you're not all that interested in. Neil Dickson is fine as Biggles, but there's nothing in the story that makes Biggles particularly noteworthy--he seems like just another typical "Steady on, chaps" type of British military officer. BIGGLES would have worked far better as a straight period piece.

The main attraction in this Blu-ray is watching Peter Cushing in his final film performance. He plays Colonel Raymond, who was a commanding officer of Biggles. Raymond is the one who informs Jim Ferguson on what is really going on, and because of this whatever emotional weight the movie has is provided by Cushing. Col. Raymond's "lair" is located inside the supports of London's Tower Bridge, and a large portrait of Queen Victoria is quite prominently featured (Hough places Cushing in front of it a number of times). Cushing looks incredibly frail (he was 72 during filming, but he appears even older), but his determination and conviction as an actor is as strong as ever. As he did throughout his entire career, Cushing brings an absolute sincerity to his role, and it's nice that in his cinematic swan song he got to play an Englishman--and a Defender of the Realm to boot. Cushing fans can at least give thanks that the Great Man's final performance wasn't one of those "old Nazi" parts he played a number of times during his older years.

I must point out that the character of Jim Ferguson's supposed comic relief co-worker is played by William Hootkins, who will forever be known as Porkins, one of the Rebels who attacked the Death Star in STAR WARS. At the end of BIGGLES, the X-Large X-Wing Pilot and Grand Moff Tarkin (Cushing) actually are in the same scene!

Kino's Blu-ray of BIGGLES features the usual fine picture & sound quality one expects from the company. The extras are two brand-new interviews with Neil Dickson and Alex Hyde-White. Dickson reveals that not only did he know about Biggles, he had even read some of the books. Dickson has nothing but positive memories about the project--he even gushes about the film's soundtrack! Hyde-White shares that even though he was the son of British character actor Wilfrid Hyde-White, he was raised in America. Both Dickson and Hyde-White share their admiration for Peter Cushing.

BIGGLES is supposed to be a light-hearted action adventure tale, so maybe my nitpicking is not the proper response to it--but I do feel it could have been better than what it was. The movie will be mostly of interest to Peter Cushing fans. His last movie isn't great, but it gave the actor the chance to go out in a decent role.