More Thoughts On ROGUE ONE 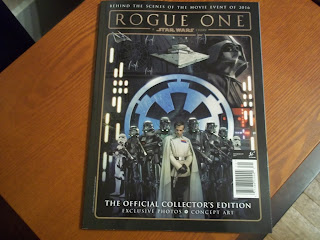 Now that some time has passed since the opening of ROGUE ONE, this post will further examine the film. (WARNING: If you haven't seen it yet, don't read ahead, because there will be spoilers.)

I honestly believe that ROGUE ONE is the third-best Star Wars film, behind the original and THE EMPIRE STRIKES BACK. When I stated that on Facebook, some folks reacted with surprise, but I can't see why. It's far better than the prequels, and it's better than either RETURN OF THE JEDI and THE FORCE AWAKENS (both those films are basically retreads of the original STAR WARS). ROGUE ONE is most definitely a war film, and it is a dark one. So dark that all the main hero characters in it wind up getting killed (even the sarcastic droid gets bumped off). When I first saw ROGUE ONE I was amazed that Disney/Lucasfilm allowed this to happen. After all, it's hard to sell action figures and toys of characters that don't have a future. But having the group of heroes not survive was the right choice story-wise. It gave emotional weight to the film, and reinforced how powerful the Galactic Empire was, and how overwhelming the odds were against the Rebel Alliance. How many geek culture films have we seen in the last 15 years where all the violence and destruction in them seemed to have no consequences whatsoever?

As I wrote in my first ROGUE ONE post, the movie is not just a war film--it is specifically a WWII film. A rag-tag group attempts to pull off a desperate mission behind enemy lines against a powerful enemy during a major conflict--this description could fit dozens of WWII movies made in the 1960s. The Empire in ROGUE ONE is building a terrifying super weapon, just like Nazi Germany was doing in many of the WWII films. ROGUE ONE has a scene where dozens of Imperial officers gather to watch a demonstration of said super weapon, and a sequence of high-ranking Nazis conferring with one another was expected in a classic war movie. Most of those Second World War flicks featured actual historical characters such as Hitler, Churchill, Ike, etc. ROGUE ONE also has famous "cameos", the most controversial being the CGI representation of Grand Moff Tarkin as played by Peter Cushing. I've already written a post on that, so I'll just say here that the ROGUE ONE Tarkin worked for me. If the CGI version of Tarkin caused some fanboy angst, the CGI Leia featured at the climax of the story seemed to tick fans off even more--but with what has happened in the last week, closing out the film with the Princess now gives ROGUE ONE a whole new level of poignancy.

The biggest Star Wars "historical" character of them all is of course Darth Vader. Vader's appearances in ROGUE ONE are short but long on impact--exactly the way the Dark Lord should be portrayed. Seeing Vader's "home" on Mustafar was a huge treat....but did he have to choke Director Krennic? Is there some sort of rule that whenever Vader shows up, he has to choke someone?? (And that "choke on your aspirations" line wasn't needed.) Vader's all out attack on the Rebels at the end, though, was a Star Wars geek's dream come true.

I figured that with all its darkness, and all the "inside baseball" Star Wars knowledge contained in it, ROGUE ONE might turn off those that didn't obsess over the franchise. However, the movie is continuing to rake it in at the box office. Be prepared to see Star Wars movies every year for a long. long time--Disney is going to squeeze as much out of this franchise as they can. I wonder, though, how the other stand-alone Star Wars films can match up to ROGUE ONE. What helps ROGUE ONE work so well, I think, is that the story had to integrate exactly with the beginning of the first STAR WARS--it had a very thorough base to proceed from. The Original Trilogy timeline is what I and many others believe to be the real Star Wars, so I hope that Disney places their future stand-alone entries in that period.

One last thing I have to go over--the fact that ROGUE ONE underwent a fair amount of re-tinkering before its final cut. The revelation of this was met with a distinct sense of worry on the internet, with rumors that the film had been ruined. Personally I didn't notice anything in ROGUE ONE that made me think of a troubled production. Some have claimed that the character of Jyn Erso was watered down, but for me the story was far more important than any of the individual characters. Many great and successful movies have had various troubles during production--creativity isn't simple or easy. ROGUE ONE, for me, is a satisfying and entertaining tale, and a true prologue to the greatest movie ever made.