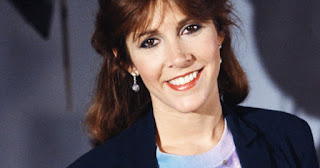 This is one post I do not want to write.

As I've stated on this blog over and over again, STAR WARS has had a major impact on my life. When this film came out, I was eight years old, and I became obsessed with every aspect of it. The performers in the film were those characters to me. They almost became something of an extended family--I knew more about them than I did my actual relatives, and that statement holds true today.

There was only one major female character in the original Star Wars saga--and yes, I had a major crush on her. I'm sure every young boy who resided on this island Earth in 1977 had a crush on Carrie Fisher, and I'm sure untold generations in the future will have a crush on her as well.

I've been thinking about why she was seemingly everyone's first crush. The massive popularity of STAR WARS was a major factor, and she was an extremely attractive young woman--but I believe it was more than physical beauty. Her Princess Leia wasn't a dream-girl princess--she had an attitude. She was feisty, and she was tough--and she was a little bit intimidating. Young boys have no understanding of the opposite sex (heck, most adult males have absolutely no understanding of the opposite sex). To any young boy, especially a four-eyed nerdy one like me, any female could be intimidating. Carrie's attitude as Leia--and make no mistake, her attitude as an actress made that character--was something that felt real. Leia was kind of like the girls who tried to boss you around the playground at recess. You were annoyed by them--but at the same time, you wanted them to like you.

Over the years I followed Carrie's various travails with a mixture of worry and frustration. Princess Leia made her an icon--but like most iconic roles, it limited her acting career as well. Carrie Fisher was a lot more talented than she was given credit for--she was the daughter of Debbie Reynolds, after all--and if you want proof of that, check out her appearance on the LAVERNE & SHIRLEY TV show. On that episode she got to be sexy, funny, and she even had a chance to sing.

What really hurts me the most about all of this is that I had a chance to meet Carrie Fisher at this summer's Wizard World Chicago--or at least I thought I did. (The details of this are in a post I wrote in August 2016.) Needless to say, I didn't meet her. And now....

I'll admit it, that's going to haunt me for the rest of my life. If I had met her, what would I have said? I honestly don't know. I probably would have just stood there like thousands and thousands of other geeky guys who lined up to meet her over the years.

Carrie Fisher's Princess Leia still affects pop culture to this day. All the female geek movie icons that have followed in her wake--Ripley, Lara Croft, Black Widow, Katniss Everdeen, etc.--have a little bit of Leia in them. Carrie Fisher has very likely touched more lives than any performer before or since. I hope in some way she understood that--and that all those geeky guys like me truly did care about her.